Please note that code is developed on the dev branch, if you want to check out the latest updates, before they are merged on main branch, please refer there. Master branch will always point to a version that we consider stable, so you can download the code by simply typing git clone https://github.com/sumoprojects/sumokoin.git

Sumokoin (スモコイン in Japanese) is a fork from Monero, one of the most respectable cryptocurrency well-known for security, privacy, untraceability and active development. Starting as an educational project, we found that it would be great to create a new coin with high level of privacy by (1) moving forward right away to Ring Confidential Transactions (RingCT), (2) setting minimum transaction mixin to 12 (current minimum mixin set at 48) that would greatly reduce chance of being attacked, traced or identified by (blockchain) statistical analysis.

Sumokoin, therefore, is a new Monero without its legacy, a truely fungible cryptocurrency among just a few ones in the market. 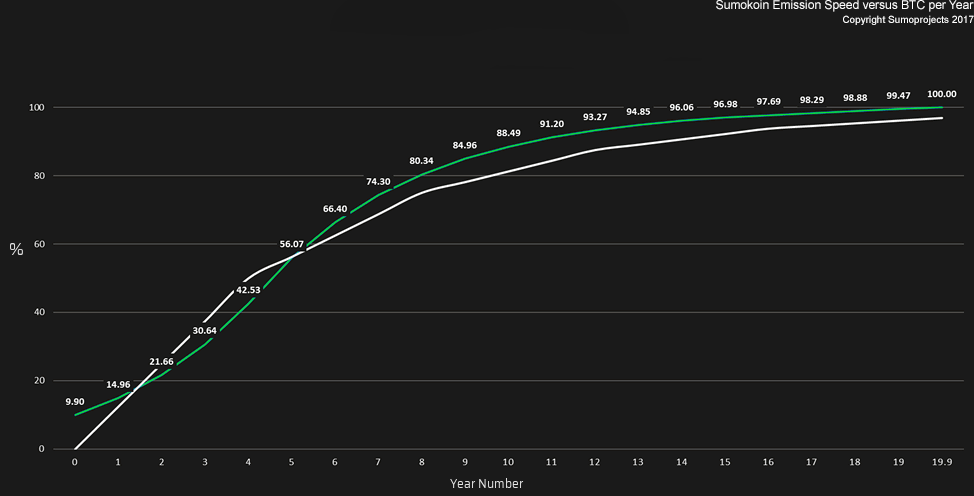 * The emulated algorithm of Sumokoin block-reward emission can be found in Python and C++ scripts at scripts directory.

As with many development projects, the repository on Github is considered to be the "staging" area for the latest changes. Before changes are merged into that branch on the main repository, they are tested by individual developers in their own branches, submitted as a pull request, and then subsequently tested by contributors who focus on testing and code reviews. That having been said, the repository should be carefully considered before using it in a production environment, unless there is a patch in the repository for a particular show-stopping issue you are experiencing. It is generally a better idea to use a tagged release for stability.

Anyone is welcome to contribute to Sumokoin's codebase! If you have a fix or code change, feel free to submit is as a pull request directly to the "master" branch. In cases where the change is relatively small or does not affect other parts of the codebase it may be merged in immediately by any one of the collaborators. On the other hand, if the change is particularly large or complex, it is expected that it will be discussed at length either well in advance of the pull request being submitted, or even directly on the pull request.

The following table summarizes the tools and libraries required to build. A few of the libraries are also included in this repository (marked as "Vendored"). By default, the build uses the library installed on the system, and ignores the vendored sources. However, if no library is found installed on the system, then the vendored source will be built and used. The vendored sources are also used for statically-linked builds because distribution packages often include only shared library binaries (.so) but not static library archives (.a).

[1] On Debian/Ubuntu libgtest-dev only includes sources and headers. You must build the library binary manually. This can be done with the following command sudo apt-get install libgtest-dev && cd /usr/src/gtest && sudo cmake . && sudo make && sudo mv libg* /usr/lib/ [2] libnorm-dev is needed if your zmq library was built with libnorm, and not needed otherwise

Install all dependencies at once on Debian/Ubuntu:

Install all dependencies at once on macOS with the provided Brewfile: brew update && brew bundle --file=contrib/brew/Brewfile

If you already have a repo cloned, initialize and update:

Sumokoin uses the CMake build system and a top-level Makefile that invokes cmake commands as needed.

On Linux and macOS

On the Raspberry Pi

Tested on a Raspberry Pi Zero with a clean install of minimal Raspbian Stretch (2017-09-07 or later) from https://www.raspberrypi.org/downloads/raspbian/. If you are using Raspian Jessie, please see note in the following section.

If you are using the older Raspbian Jessie image, compiling Sumokoin is a bit more complicated. The version of Boost available in the Debian Jessie repositories is too old to use with Sumokoin, and thus you must compile a newer version yourself. The following explains the extra steps, and has been tested on a Raspberry Pi 2 with a clean install of minimal Raspbian Jessie.

The project can be built from scratch by following instructions for Linux above(but use gmake instead of make). If you are running Sumokoin in a jail, you need to add sysvsem="new" to your jail configuration, otherwise lmdb will throw the error message: Failed to open lmdb environment: Function not implemented.

You will need to add a few packages to your system. pkg_add cmake gmake zeromq libiconv boost.

The doxygen and graphviz packages are optional and require the xbase set. Running the test suite also requires py-requests package.

Note: you may encounter the following error, when compiling the latest version of sumokoin as a normal user:

The default Solaris linker can't be used, you have to install GNU ld, then run cmake manually with the path to your copy of GNU ld:

Then you can run make as usual.

By default, in either dynamically or statically linked builds, binaries target the specific host processor on which the build happens and are not portable to other processors. Portable binaries can be built using the following targets:

You can also cross-compile static binaries on Linux for Windows and macOS with the depends system.

The required packages are the names for each toolchain on apt. Depending on your distro, they may have different names.

Using depends might also be easier to compile Sumokoin on Windows than using MSYS. Activate Windows Subsystem for Linux (WSL) with a distro (for example Ubuntu), install the apt build-essentials and follow the depends steps as depicted above.

The produced binaries still link libc dynamically. If the binary is compiled on a current distribution, it might not run on an older distribution with an older installation of libc. Passing -DBACKCOMPAT=ON to cmake will make sure that the binary will run on systems having at least libc version 2.17.

The build places the binary in bin/ sub-directory within the build directory from which cmake was invoked (repository root by default). To run in foreground:

To list all available options, run ./bin/sumokoind --help. Options can be specified either on the command line or in a configuration file passed by the --config-file argument. To specify an option in the configuration file, add a line with the syntax argumentname=value, where argumentname is the name of the argument without the leading dashes, for example log-level=1.

To run in background:

To run as a systemd service, copy sumokoind.service to /etc/systemd/system/ and sumokoind.conf to /etc/. The example service assumes that the user sumokoin exists and its home is the data directory specified in the example config.

If you're on Mac, you may need to add the --max-concurrency 1 option to sumo-wallet-cli, and possibly sumokoind, if you get crashes refreshing.

While Sumokoin isn't made to integrate with Tor, it can be used wrapped with torsocks, by setting the following configuration parameters and environment variables:

TAILS ships with a very restrictive set of firewall rules. Therefore, you need to add a rule to allow this connection too, in addition to telling torsocks to allow inbound connections. Full example:

This section contains general instructions for debugging failed installs or problems encountered with Sumokoin. First, ensure you are running the latest version built from the Github repo.

We generally use the tool gdb (GNU debugger) to provide stack trace functionality, and ulimit to provide core dumps in builds which crash or segfault.

Once it stalls, enter the following command:

When it terminates with an output along the lines of "Segmentation fault (core dumped)", there should be a core dump file in the same directory as sumokoind. It may be named just core, or core.xxxx with numbers appended.

You can now analyse this core dump with gdb as follows:

Print the stack trace with bt

To run sumokoin within gdb:

Pass command-line options with --args followed by the relevant arguments

There are two tools available:

You can then run the Sumokoin tools normally. Performance will typically halve.

Install valgrind and run as valgrind /path/to/sumokoind. It will be very slow.

Instructions for debugging suspected blockchain corruption as per @HYC

There is an mdb_stat command in the LMDB source that can print statistics about the database but it's not routinely built. This can be built with the following command:

The output of mdb_stat -ea <path to blockchain dir> will indicate inconsistencies in the blocks, block_heights and block_info table.

These records are dumped as hex data, where the first line is the key and the second line is the data.

Because of the nature of the socket-based protocols that drive sumokoin, certain protocol weaknesses are somewhat unavoidable at this time. While these weaknesses can theoretically be fully mitigated, the effort required (the means) may not justify the ends. As such, please consider taking the following precautions if you are a sumokoin node operator: