This release is compatible with the Superpowers app >= v6.0.0 because of some breaking changes.

We've split the app into its own repository, which means we can easily release small fixes and updates to the server & client without making you download the whole app again.

Systems can now expose multiple export options with settings. A system could upload your game directly to a portal or offer exporting for different platforms.

The way your project is run from within the Superpowers app can now also be customized on a per-system basis.

A revision is a "checkpoint" for your asset. Asset editors which support it will allow you to save revisions, preview and restore them at any time.

Thanks to our contributors, Superpowers Core is now available in:

There were many more bugfixes and small improvements. See the commit history for a full list of changes in this release.

It's been almost a full week since we went open source. Some highlights:

We're thrilled with the warm welcome and the many contributions popping up!

Thanks to @BaptisteDixneuf (#26) and some work on our end to correctly report build errors, every pull request and push made to the core repository is now automatically checked for build errors on Travis. The other repositories will be following soon.

Following an interesting experiment by @risq (#15), we've spent more time exploring how systems and plugins should be installed and updated. We've set up a registry of systems and plugins and added support for installing systems from the command line:

System releases are automatically fetched from GitHub. Support for installing individual plugins, as well as updating it all, is planned for soon. The redesigned launcher will feature a graphical user interface to manage it all.

NOTE: If you run your server from the command line, you must now start it with node server start rather than just node server.

Work on the redesigned launcher

Coding on the upcoming redesigned launcher itself hasn't resumed yet but community member Kilkonie has started a very interesting discussion and created some quality mockups: 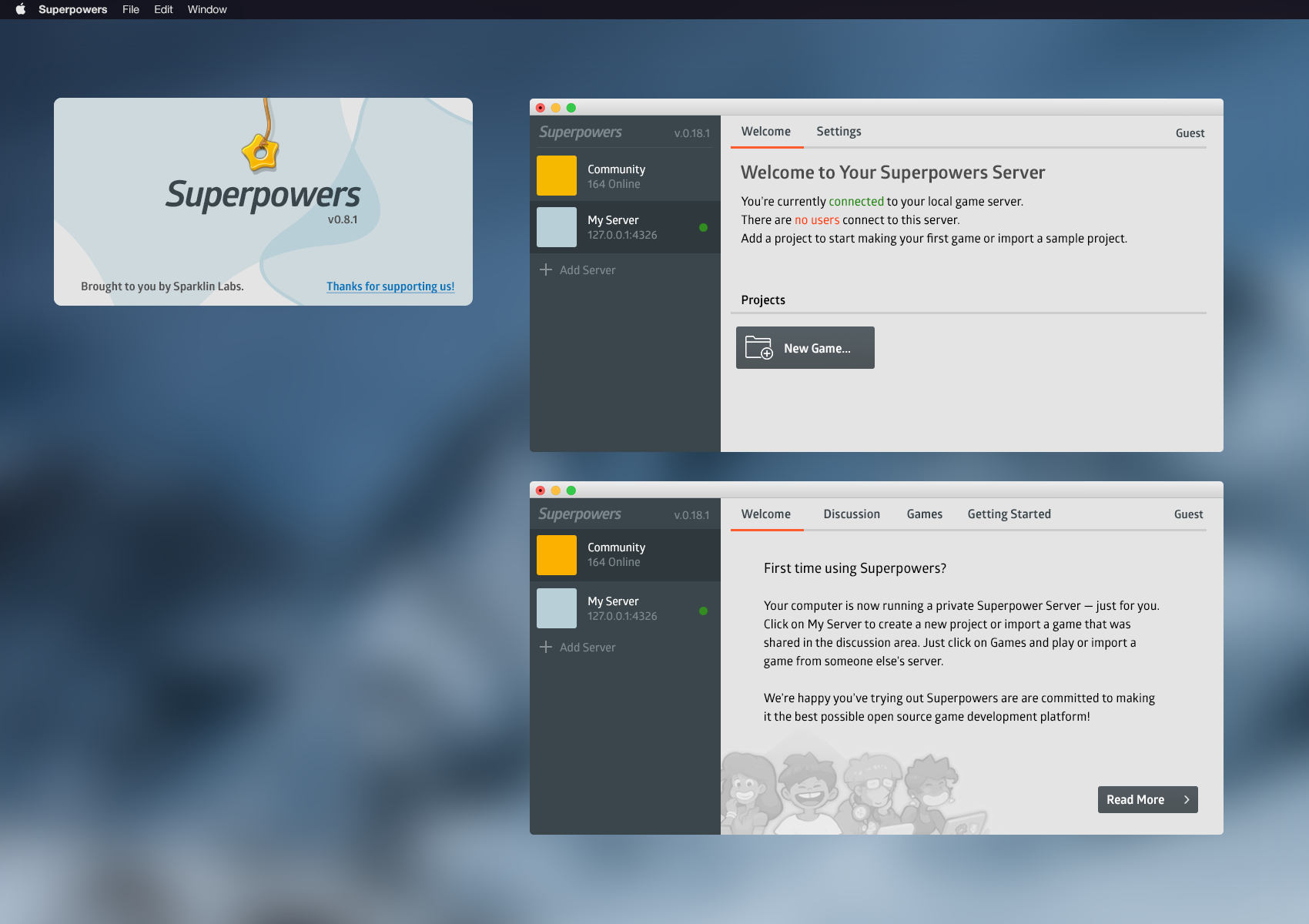 Noteworthy fixes and improvements in this release

The documentation for extending Superpowers has been massively improved. A repository has been created to host a simple and heavily-commented example system. Work on it will start soon.

The server has gained a new command for generating the basic structure of a system or plugin:

This release fixes a bug introduced in the midst of the many refactorings we did over the holidays. We missed one rename of api to typescriptAPI. This prevented the list of behaviors and properties (as seen in behavior components in scenes) from being properly updated.

We're incredibly happy to release the first public release of Superpowers!
THANKS to all the awesome supporters who helped us get this far.

There's no major new editor features in this release since we've been focusing on the Open Source transition, website, videos, etc. but there are lots of under-the-hood improvements.

Superpowers can now be translated!

We've added internationalization support to every part of Superpowers (except the launcher, coming soon!). This means people will now be able to translate it into their preferred language! 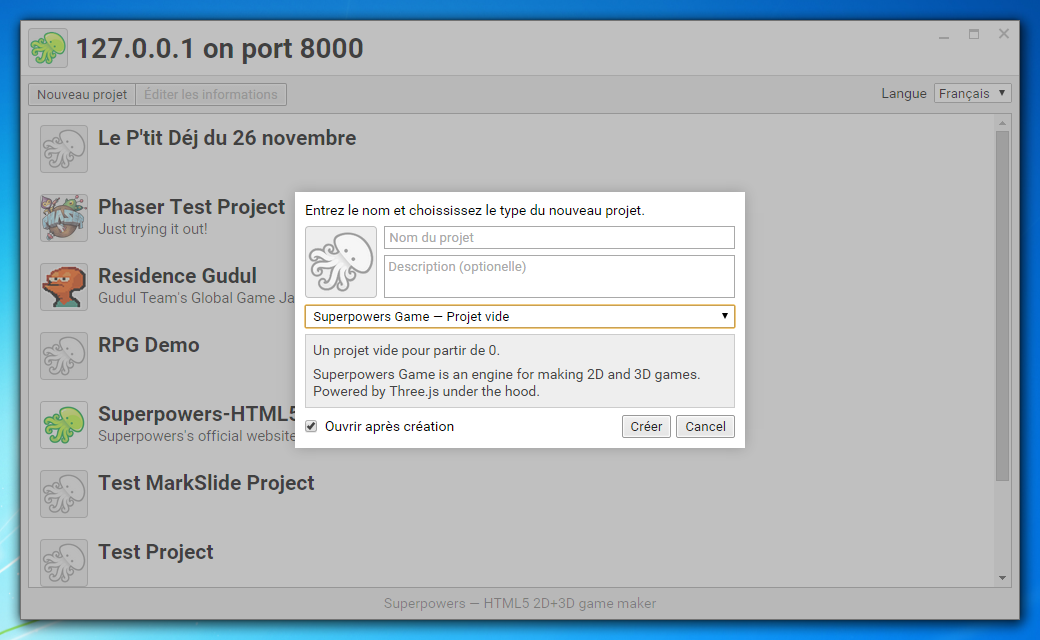 It might not feel like a big deal, but it helps a lot for those who don't speak English fluently.

Thanks to Harraps for contributing the updated definition files and of course, schteppe for his great work on the library itself!

The scene that will be loaded on game startup now has a badge in the assets tree to make it stand out.

There were quite a few changes for system and plugin development this time around!

All SupCore.Data.Base.Resource classes now take an extra id: string parameter at the beginning of their constructor.

Publishing methods for assets and resources

Assets and resources can now override the publish method for customizing how they are written to disk when making a build.

You should now use an npm script named build for triggering whatever build system you use for your plugin.
There's a shared pluginGulpfile.js you can point to if you use Jade, Stylus and TypeScript like we do: