An example using CircleCI for continuous deployment to Surge.

An example using CircleCI for continuous deployment to Surge.sh.

Continuous Deployment services like CircleCI make it possible to run publish your project on Surge each time you push to a GitHub repository.

This guide will walk you through:

First, you’ll need your token from the Surge CLI. This secret key lets services like CircleCI login and publish projects on your behalf. Get your Surge token by running the following command in your terminal:

You’ll be asked to login again, and afterwards your token will be displayed like this:

Adding Surge as a devDependency to a package.json file

CircleCI’s machines won’t have Surge installed by default, so you also need to save Surge as a development dependency in your project. This lets CircleCI know it needs to install Surge to publish your project.

You can do this by creating a package.json file if you don’t have one already. Run the following command in your terminal to be walked through making this file (you can hit enter to accept the defaults):

You will end up with a file that looks something like this one.

Next, run this command to save Surge as a devDependency, so CircleCI will install it:

If you needed to add a new package.json file, you’ll want to make one small change. It’s possible your initial build will fail if you don’t have any tests, or if you have the default test command in your package.json.

You can add tests or just clear this out of your package.json file entirely, changing:

Commit this change, and push it to your repo. Now, even if you don’t have tests, CircleCI will be able to move onto the deployment command.

Add your project’s repository to CircleCI

Now you can login and setup a new project on CircleCI. Choose the GitHub organisation your project is in (surge-sh in this example) and then build your project’s GitHub repository: 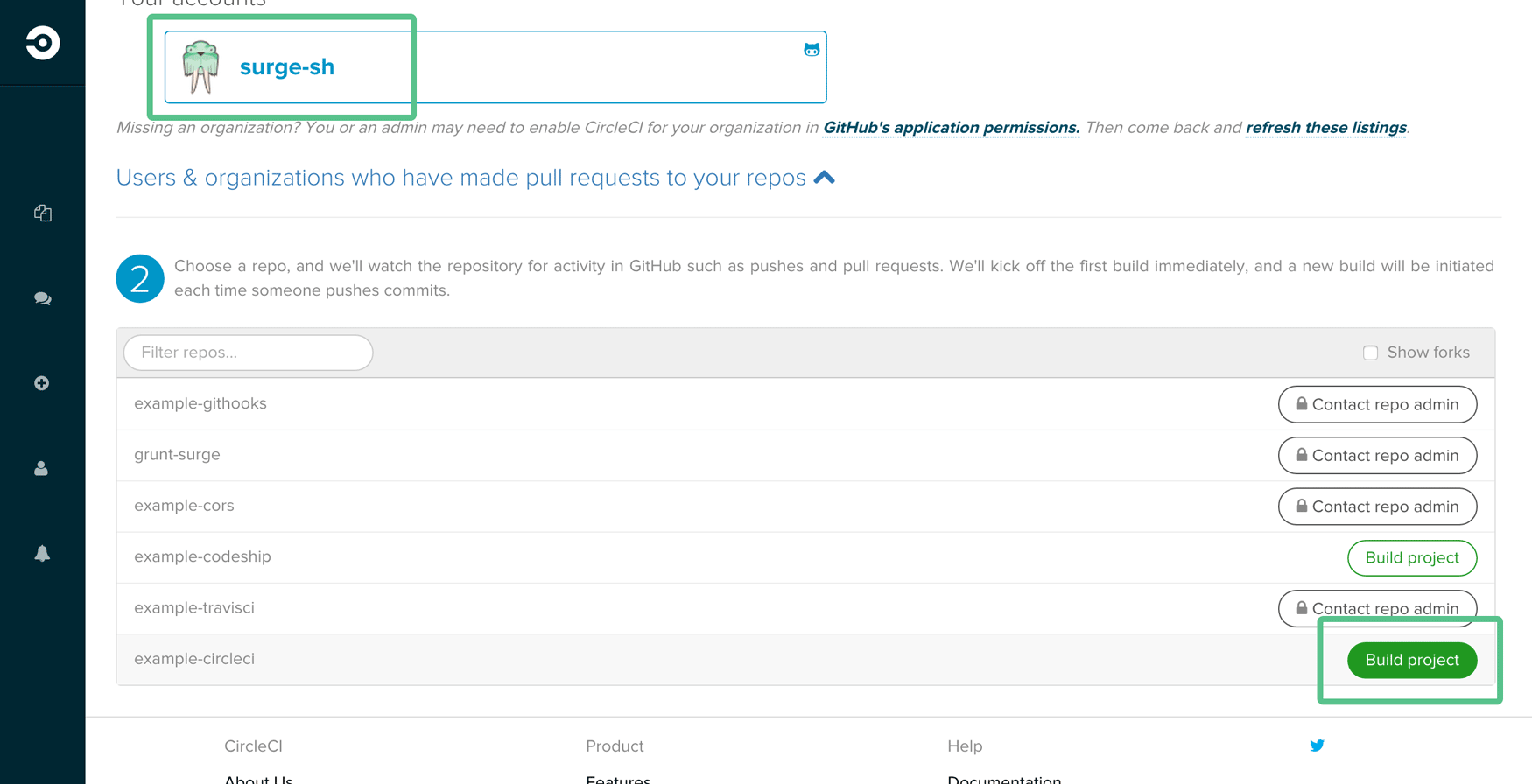 Choose Environment Variables from your project settings, and you’ll be able to secretly add your email address and token so CircleCI can login to Surge for you:

…and set it to the email address you use with Surge.

Next, add another environment variable called:

…and set it to your Surge token.

The last step is to add a circle.yml file to your project.

…thecircle.yml file makes it easy to tell CircleCI what you need. This is a simple YAML file where you spell out any tweaks required for your web app. You place the file in your git repo's root directory and CircleCI reads the file each time it runs a build.

There are more examples of what you can do with a circle.yml file directly from CircleCI.

Now, when you push your project to GitHub again, your deployment command will be run and your project will get published automatically.

An example using CircleCI for continuous deployment to Surge.