Umbilicus: Ascension - a 4-player cooperative platformer where only 1 player can win.

Re-mixed from Umbilicus: Descent Team Delta, made for the 2015 Global Game Jam.

You are stranded at the bottom of a pit with limited oxygen.

You need to cooperate to make your way out.

But only one of you can be saved. 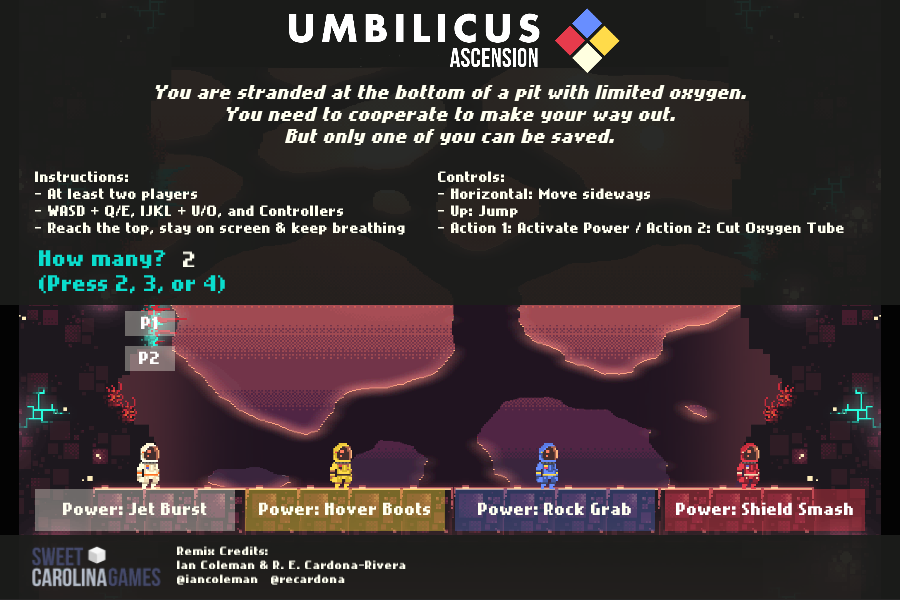 In Umbilicus: Ascension you are part of a team that must escape a pit. You must cooperate and coordinate with each other (out of game) to carefully maneuver to the top. However, only one player can actually win the game.

The entire team is sharing one oxygen tank that depletes over time. Scattered powerups will replenish your oxygen tank. In addition, each player has a unique ability they can leverage to help the entire team advance. However, any player can decide to cut the oxygen cord, which detaches everyone but also leaks oxygen at a much faster rate.

How will you reach the top?

This game requires at least two players. If present, this game will attempt to use two gamepads. By default, the game uses WASD and IJKL controls.

Note: The original code base depended on 2D Toolkit, which costs $75. We refactored the code to use Unity-native 2D tools, which are free.

How the Game has Changed

As mentioned, Umbilicus: Ascension is a remix of the game Umbilicus: Descent Team Delta. Here's a summary of what we changed:

Umbilicus: Ascension - a 4-player cooperative platformer where only 1 player can win.