Travis Listener is an architecture that crawls TravisCI to collect Builds and Jobs. It currently contains two plugins. One save all the builds and jobs inside a MangoDB database. The second plugin detect the restarted builds and save them.

Travis Listener of seven modules: three services, two plugins, a dashboard, and a database. The infrastructure is built on top of Docker compose v2.4. Docker Compose is straightforward to install, scalable, and resilient (given. e.g., its auto-restart capabilities). Each module of our infrastructure is thus a docker image integrated into Docker compose. The services, plugins, and the dashboard are implemented using JavaScript and Node.js v.10. 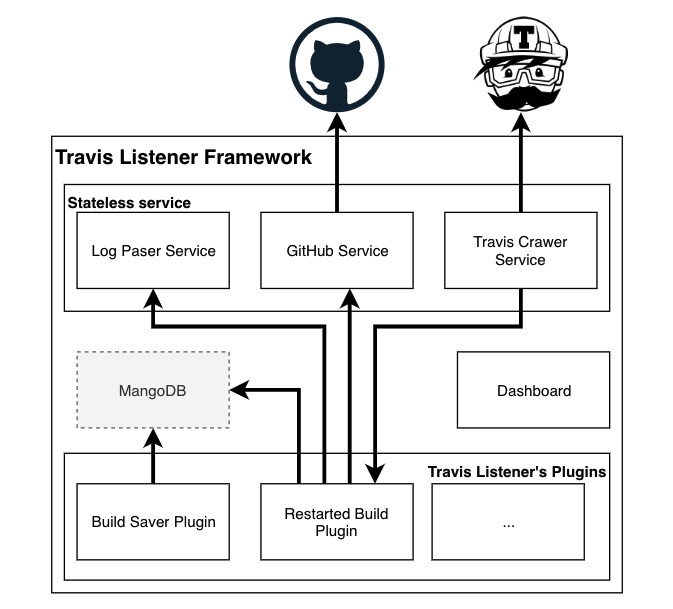 The Dashboard provides a web interface to configure and monitor the state of the different modules of the system.

For the Database, we use MongoDB which integrates well with Node.js and provides data compression by default. Data compression is a useful feature, since we collect millions of highly compressible log files.

The Log Parser Service is a service that is used to manipulate logs. The current version of the service provides the following features:

The GitHub Service is a simple middleware component that handles GitHub API's tokens. It serves to simplify the usage of the GitHub API within Travis Listener by centralizing identification and rate limiting.

The Build Saver Plugin listens to the Travis Crawler Service and saves all information to the database. We save the following information: TravisCI's job, TravisCI's build, commit information (not including the diff), repository information, and user information. The goal of this plugin is to track all changes, and provide statistics on who is using TravisCI.