A propagator library for Clojure 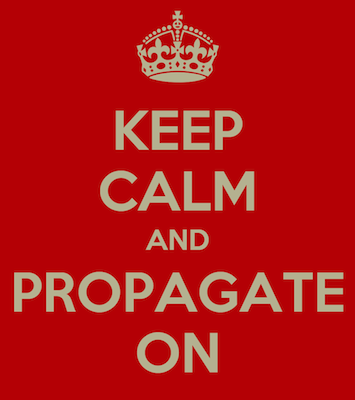 The propaganda library is a Clojure implementation of the propagator computational model described in The Art of the Propagator. The aim of the library is to be easy to use and reason about, yet extensible.

Two different strategies have been implemented: one using the Clojure STM for handling the propagation of values in the system; and one representing the system as an immutable value, without the aid of any underlying transactional model. The latter approach makes it possible to use propagators from javascript, and is the biggest contribution from this project.

There is a Clojars release containing an implementation that works in both Clojure and ClojureScript.

The leiningen dependency is

In this short example we just use the default merger function, we define the square and square-root propagator and set up relations beween simple cells.

default-merge will give us a merger that will merge nothing with anything, but will enforce that anything else that is attempted to be merged will return a contradiction

nothing can be merged with nothing and will return nothing

Anything else will be the result of the merge

... unless it gives rise to a contradiction

... which can be extended to go both ways

We can now construct cells and set up the quadratic relations to read the squared of a number in our system:

Or the square-root, depending on the input from the user

The objective of this project is to create an extinsible propagator library for Clojure. Propagators define a declarative computational model. They are described in the article The Art of the Propagator.

Along with the library itself, the project should supply documentation of the API, good examples and tutorials.

I have not previously worked with propagtors, so this will also be an exploration for me.

Ragnar Dahlén and Kasper Langer for feedback on the library.

A propagator library for Clojure