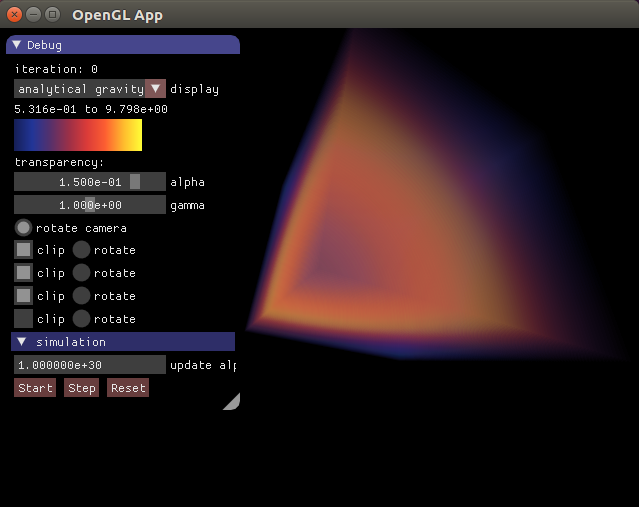 solve the metric using the norm of G_ab = 8 pi T_ab This is gonna be like my EinsteinFieldEquationSolution project, but using OpenCL And now I'm going to do the legwork and finish the math to calculate the gradient descent directly, rather than numerically approximating it. And I'm adding lots of metaprogramming, which means Lua markup, which is more difficult to write out in C++. Which means I'm skipping the C++. Hooray!

For the spherical body problem it is converging slowly (1e-30) in flat space initial conditions, but once it starts to develop surface features it converges very quickly. I'm thinking I should use a line search to fix this. Maybe Hessian as well, but that'd be complex, so I'll put it off until my automatic symbolic generation (which depends on me simplifying TensorRef * TensorRef in my symmath-lua)

Now I'm allowing update to alpha, beta, gamma separately, and testing it with alpha update only. Goes much faster. What happens is alpha varies greatly around the matter boundary (like it should), but then the large alphas get larger and small gets smaller, and the coordinates grow too much. Maybe I should restrict alpha and det gamma to unit volumes? Or only converge the linearized metric, leaving the background?

Now, using Newton method, I've messed with manually adjusting the line search. Starting at flat space, wiggling the gradient back and forth, I can get it converging down towards 1e-6, but this is still nothing compared to initialization in stellar Schwarzschild, which is 1e-40. It appears to be converging to a local minima formed by the discretized spatial differentiation calculations used by the curvature. Starting at stellar Schwarzschild and converging to a minimia causes it to soon diverge as well. Taking smaller steps shows that stepping in either direction along the gradient quickly walks out of the valley containing the minima.

The problem with this whole technique is that coordinates and geometry are separate things. There's a number of coordinates that represent the same geometry (with the same curvature). That's probably why the metric tensor solved values are diverging. TODO constrain it somehow.