thepaperpilot released this · 6 commits to master since this release

thepaperpilot released this · 20 commits to master since this release

For details on what's happening with development, please check out the discord.

Also, these changes have been made in sneak previews but not in official pre-releases:

thepaperpilot released this · 289 commits to master since this release

thepaperpilot released this · 296 commits to master since this release

Small update, with some bug fixes and updated electron and babble.js.

The bug fixes, specifically, were:

thepaperpilot released this · 320 commits to master since this release

Yes I know this release was promised to take waaay longer than it actually did, but after the last version inspiration struck and I decided to fix the most pressing issue with babble buds: how much of a pain it is connecting to other users.

Before, you needed one player to host, and for other players to connect to them. This often involved port forwarding, using a hack like hamachi, or hosting it on a server somewhere, something that shouldn't be expected of every user.

Now, servers act more as hubs, and multiple groups of people can connect to them, go off into their own little room separate from the others, and go about their business. I'm now hosting such a hub at babblebuds.xyz, port 8080. So just put babblebuds.xyz in the "IP" field in settings, and you're all set! (new projects will default to this, instead of localhost). Of course, if you'd rather to use your own server and have the knowledge on how to do so, that is also completely allowed and encouraged (the server files are available on the github repo).

So what does this mean for you? It means to connect to users all you need to do is say to the other players "Connect to my room: It's called 'VitaliDeservedBetter' and the password is 'Boooooooones' with eight o's" and then the other players will, after expressing their distaste at how inconvenient and excessive eight o's is, will just type those in and press connect, and that's it! Not a single person, including the host, needs to do anything but type in a room name and password.

I also added some cool features like a "connected users" list, complete with fun randomly chosen nicknames (don't worry, you can edit your nick name in settings), and the ability to kick users and make all the puppets move off the stage.

thepaperpilot released this · 339 commits to master since this release

I'm going to be up front: I wasn't able to get asset bundles into this release. It will be a really cool feature when it finally is implemented and trust me when I say I did all I could to try and get it in this release, but there's just too much other stuff I want you all to be able to play with for me to hold back this release any longer. Plus, my life is going to get a lot busier for awhile, and I still don't know when I'll be able to work on asset bundles, let alone finish them.

Anyways, there's lots of cool stuff to check out here. The thing you should notice first is the welcome screen, which will populate itself with your most recently opened projects - with thumbnails and everything! Once inside the interface has seen lots of minor improvements that should just make it easier to use. Most of all the changes should be readily apparent and intuitive, but there's some things I haven't come up with a good way of making immediately apparent to the user, like right clicking an asset in the asset library to access its settings, or that you can do stuff like move assets around in the puppet editor by using the arrow keys. There are a lot of new features and I'm kinda too lazy to make a full feature list, but I suppose if your really interested you could look at all the commits since the last release here. Otherwise, I'd also like to suggest you go through the menu buttons (particularyl "view"), there's some neat stuff in those.

Some of the biggest changes made were all about how assets are stored and referenced. Because of these changes there are some new cool things like being able to update assets, sync these changes, and making sure no one is able to do things like delete or replace an asset made by someone else, and syncing assets between clients should be much more smooth and stable than previously.

I hope you enjoy this release, and know that feedback is always welcome and appreciated, even if I won't be able to work on this project actively for a bit. Windows will want the windows build, mac users the darwin build (will be uploaded in a couple of days, can't build it on my laptop), and linux the linux build. For all of those, you probably want the "x64" version, if there are any errors about the architecture or not being able to run the program, try one of the others.

Now, a little about the future. Part of what I'll be busy with over the next few months is actually related to babble buds, or rather the puppet rendering engine I made that it uses. I'll be potentially making a game using babble buds for the cutscenes, similar to tower offense (mentioned here a few posts back), but for a larger game with a larger team over a longer period of time. And, its in unity, using c# instead of javascript. So, I've already made a basic port of babble.js (the engine) to c#, which I'm calling babble.cs, and if anyone is interested in using babble puppets in a unity project, you can check it out here. Please note its not really ready for production yet, as it is still being worked on, but at the same time if you need it now, then it is plenty usable, and the provided demo project should make it clear how to use it. Additionally, I'll be working on a piece of software to help write cutscenes for the babble puppets, as up til now its been tedious manual labor. It'll be called "babble movie maker" and probably won't be ready for general use for a substantially long amount of time, but it's in the works. And of course, eventually there'll be a 1.0 release of babble buds itself, with all sorts of cool things like asset bundles (urgh!), being able to browse community made puppets from within the program, and some features to make connecting to other users much easier, since its currently a hassle still. Once again I hope you enjoy this current release, and rest assured there's still a lot more down the pipeline, but it'll be awhile since I'm just one guy, and I've got a lot on my plate. Thanks! 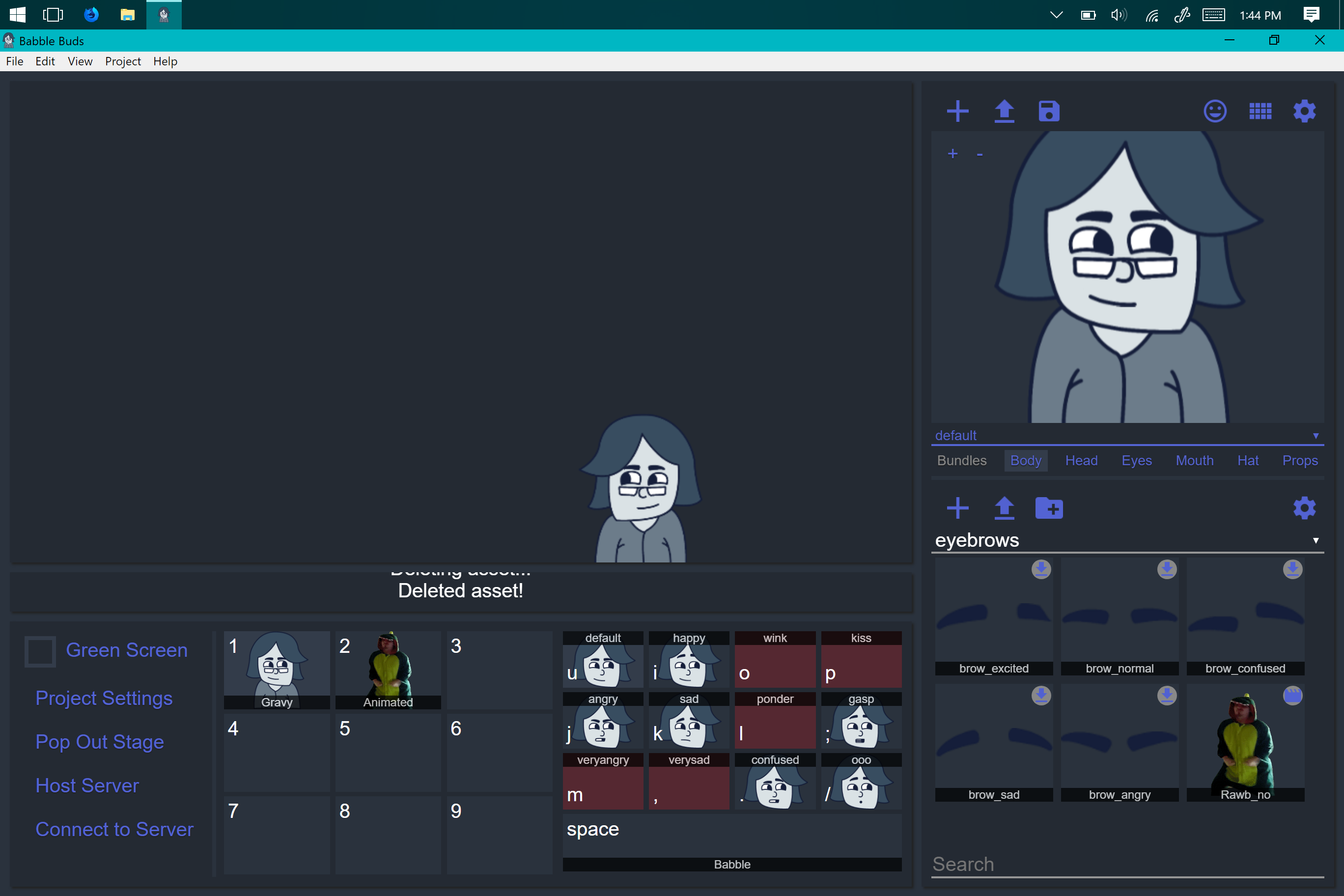 thepaperpilot released this · 453 commits to master since this release

This is an alpha release! It is incomplete and probably buggy. We're getting close to beta though, at this point I'd call it "possibly stable".

thepaperpilot released this · 455 commits to master since this release

thepaperpilot released this · 464 commits to master since this release

thepaperpilot released this · 465 commits to master since this release

While getting rid of the URealms content I had to remove the old releases, so here is what I think is the changelog from v0.5.0: