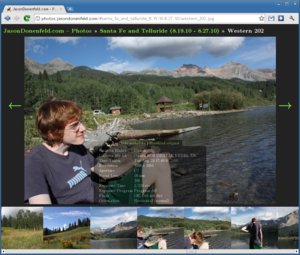 PhotoFloat is an open source web photo gallery aimed at sleekness and speed. It keeps with an old hat mentality, preferring to work over directory structures rather than esoteric photo database management software. Everything it generates is static, which means it's extremely fast.

Check out a demo!

PhotoFloat consists of two segments – a Python script and a JavaScript application.

The Python script scans a directory tree of images, whereby each directory constitutes an album. It then populates a second folder, known as the cache folder with statically generated JSON files and thumbnails. The scanner extracts metadata from EXIF tags in JPEG photos. PhotoFloat is smart about file and directory modification time, so you are free to run the scanner script as many times as you want, and it will be very fast if there are few or zero changes since the last time you ran it.

The JavaScript application consists of a single index.html file with a single scripts.min.js and a single styles.min.css. It fetches the statically generated JSON files and thumbnails on the fly from the cache folder to create a speedy interface. Features include:

It is, essentially, the slickest and fastest, most minimal but still well-featured photo gallery app on the net.

Modify the part that says UA-XXXXXX-X and put your own in there.

Tweak the index.html page to have a custom title or copyright notice.

This simply runs all the javascript through Google Closure Compiler and all the CSS through YUI Compressor to minify and concatenate everything. Be sure you have java installed.

When you're done, fill albums with photos and directories of photos. You can also use symlinks. Run the static generator (you need Python≥2.6 and the Python Imaging Library):

After it finishes, you will be all set. Simply have your web server serve pages out of your web directory. You may want to do the scanning step in a cronjob, if you don't use the deployment makefiles mentioned below.

The JavaScript application uses a very simple API to determine if a photo can be viewed or not. If a JSON file returns error 403, the album is hidden from view. To authenticate, POST a username and a password to /auth. If unsuccessful, 403 is returned. If successful, 200 is returned, and the previously denied json files may now be requested. If an unauthorized album is directly requested in a URL when the page loads, an authentication box is shown.

PhotoFloat ships with an optional server side component called FloatApp to faciliate this, which lives in scanner/floatapp. It is a simple Flask-based Python web application.

Give this file a correct username and password, for both an admin user and a photo user, as well as a secret token. The admin user is allowed to call /scan, which automatically runs the scanner script mentioned in the previous section.

Decide which albums or photos are protected:

This file takes one path per line. It restricts access to all photos in this path. If the path is a single photo, then that single photo is restricted.

FloatApp makes use of X-Accel-Buffering and X-Accel-Redirect to force the server-side component to have minimal overhead. Here is an example nginx configuration that can be tweaked:

Note that the internal-* paths must match that of app.cfg. This makes use of uwsgi for execution:

Both the scanner and the webpage have a make deploy target, and the scanner has a make scan target, to automatically deploy assets to a remote server and run the scanner. For use, customize deployment-config.mk in the root of the project, and carefully read the Makefiles to learn what's happening.

If you have any suggestions, feel free to contact the PhotoFloat community via our mailing list. We're open to adding all sorts of features and working on integration points with other pieces of software.