Slide deck is on prezi at http://prezi.com/0oyzn-ralb-q/?utm_campaign=share&utm_medium=copy

Should You Be Worried?

A mashup for neurotic residents of Omaha, Nebraska, as seen through twitter and a bunch of geographic APIs and regular expressions. 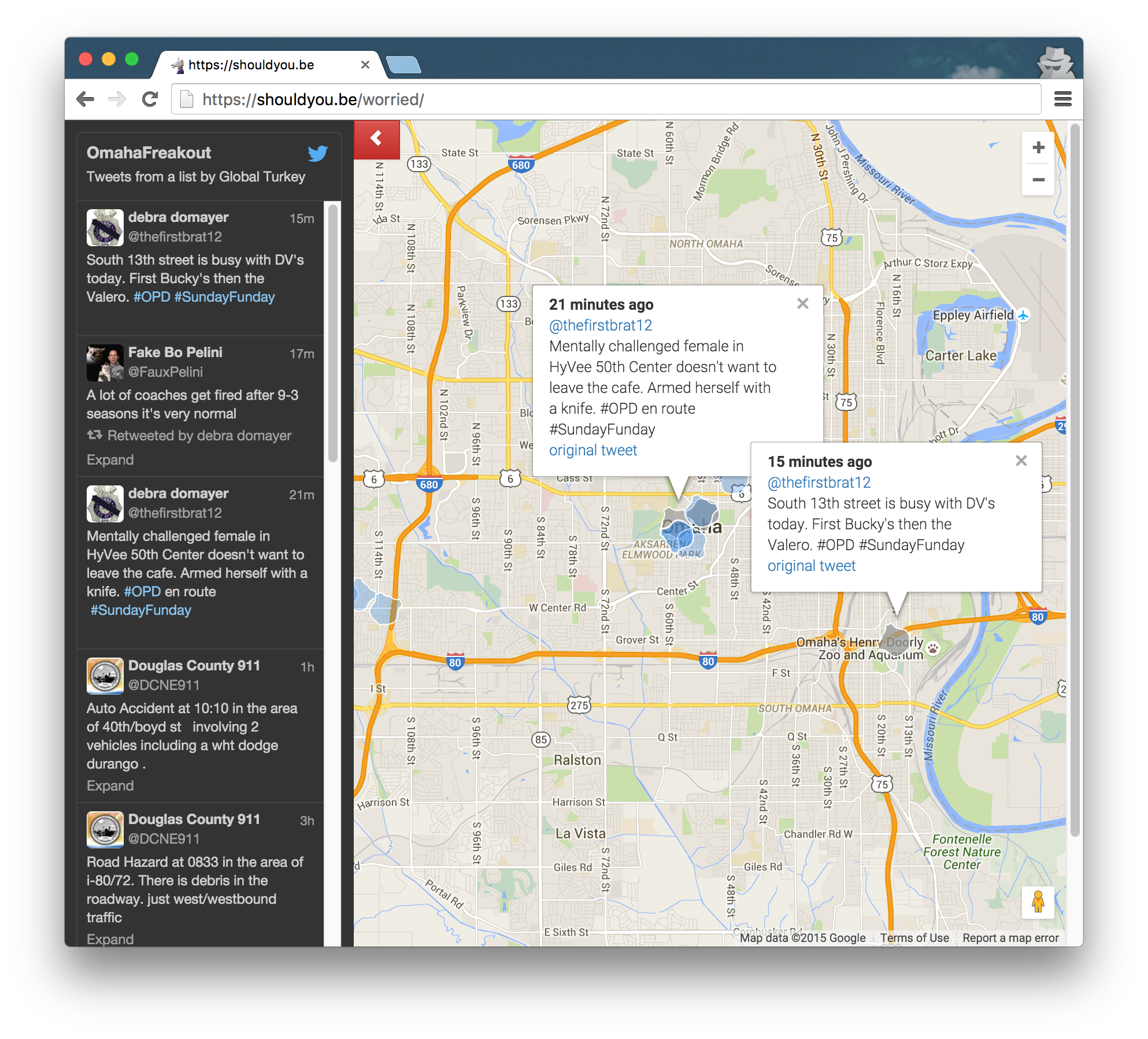 If you've ever wondered why there are lights and sirens screaming through the neighborhood or why the "ghetto copter" is hovering above, then you'll understand the motivation behind this mashup. Thanks to some folks who live tweet the police and fire dispatch radios during the hours when mayhem typically ensues in my local area, you can quickly-ish and easily-ish get a sense for where the action is.

This app takes advantage of the twitter streaming API, uses sausage-fingered algorithm to extract guesses at the addresses being referenced, looks up the appropriate map coordinates, and pushes the map coordinates to your browser, which will then pan the map to the last event to occur. Even on mobile devices, it typically takes less than a second for this to happen from the time the tweet is published. In real terms, this obviously depends on when events get tweeted, but it has not been uncommon for the map to be updated long before the authorities arrive.

I've intentionally avoided capturing any end-user information, and the record of which incidents you've clicked is tracked only in the browser's Web Storage.

Sadly, due to the number of integrations here, this is not the type of project that one can simply check out, build, and run. The number of third party APIs with their respective keys and URLs makes this virtually impossible. I have tried to be as didactic as possible so the project can be a resource to others who may wish to do similar integrations.

In the Google Developer's Console, create a new project.

Take note of the project ID (later referenced as "app id" in some of the documentation - I will use the terms interchangeably.

On your local machine, create a new project, using this Maven Archetype

You will be prompted for some naming things like groupId, as well as which archetype to use. Choose the "endpoints-skeleton-archetype" option.

Our project will have a server component (the part hosted on GAE) and a client component. By convention, I choose to name my server component with a "-war" suffix, e.g. "worried-war." The client, then, will be "worried-jar," and will be an executable jar.

At this point I made series of changes to the pom.xml. These aren't really functional changes, they are just to take advantage of newer Maven features, which are a bit less verbose (using the Maven Compiler Plugin to specify versions has always bugged me, and specifying the maven.compiler.source and maven.compiler.target seems to work fine).

Follow the instructions in keys.properties for obtaining API keys.