Docker and Ruby based PaaS

PaaS for the People

Peas is a Heroku-style Platform as a Service written in Ruby using Docker. It is heavily inspired by Deis and Dokku.

Peas' philosophy is to be an accessible and easily hackable PaaS. It doesn't aim to be a complete enterprise solution. Instead it aims to be a relatively unopinionated, but solid starting place using all the goodness of Ruby; Rspec, Bundler, Guard, Rack, Mongoid, Docker-api, Puma, Grape, GLI, Celluloid, and more.

#General Installation Instructions There is a universal installation script at contrib/bootstrap.sh, it can be run directly on most vanilla *nix systems with root access;

It works on recent versions of Ubuntu, Debian (>=8), Fedora, Centos and Redhat. It uses pacapt to install the OS's native Docker package (ensuring Docker is managed by an init system). It then runs contrib/peas-dind/run.sh to install the Peas image itself, with a restart policy of 'always', ensuring that Peas starts at boot.

Local development environment
To run on Windows and OSX, please follow the 'vagrant' instructions below.

This is the preferred method for local development, but note that local development is also possible with the Docker installation method. All you will need is; Ruby(>=2.1), Docker(>=1.1) and Mongo DB(>=2.6). All of these are generally installable via your system's package manager, no compiling should be necessary.

The Peas API will be available at vcap.me:4443.

Docker
This installation method will work anywhere that Docker can be installed, so both locally and on remote servers like AWS and Digital Ocean.

The Peas API will be available at vcap.me:4443.

Vagrant
Most likely useful to you if you are on Windows. There is a Vagrantfile in the root of the project. All it does is boot a recent VM of Ubuntu and then installs Peas using the Docker method above.

The Peas API will be available at peas.local:4443.

CLI client
To interact with the Peas API you will need to install the command line client: gem install peas-cli

During development you will find it useful to use the peas-dev command. It uses the live code in your local repo as the CLI client. You can put it in your $PATH with something like; sudo ln -s $(pwd)/peas-dev /usr/local/bin/peas-dev

Setup
Peas aims to follow the conventions and philosophies of Heroku as closely as possible. So it is worth bearing in mind that a lot of the Heroku documentation is relevant to Peas.

First thing is to set the domain that points to your Peas installation. If you're developing locally you can actually just rely on the default vcap.me which has wildcard DNS records to point all subdomains to 127.0.0.1.

To use a different domain: peas admin settings peas.domain customdomain.com

Users
Peas is currently authenticated by an API key on a per user basis. The first user is automatically created when you first interact with the CLI. It uses your default SSH key and username, so there is no need to register.

At the moment you will need to use the controller's console to add more users:

Deploying
Next thing is to get into the directory of the git repo for the app you want to deploy.

The last line of the deployment output should contain the URL for your deployed app.

You can then scale processes using: peas scale web=3 worker=2

Services
If a service URI is provided to Peas' admin settings then all subsequently created apps will be given an instance of that service. Therefore, by issuing something like;
peas admin settings mongodb.uri mongodb://root:password@mongoservice.com
all new apps will get created with a config variable of something like; MONGDB_URI=mongodb://appname:2f7n87fr@mongoservice.com/appname

New services can be added by creating a new class in lib/services. You can use any of the existing service classes as a template.

Debugging
You can get a shell to the controller with peas admin run bash. There is no root access at the moment, but you can view logs, run rake console and restart services. 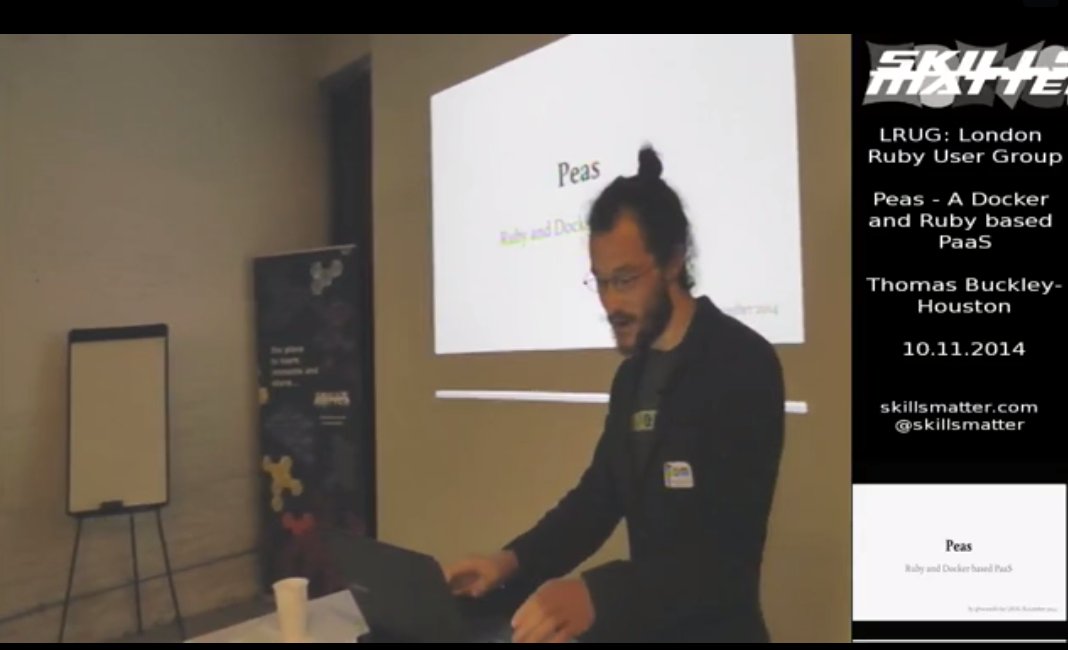 Docker and Ruby based PaaS