schnapple.com/doom-3-for-ios-and-tvos-for-apple-tv/
85 stars 11 forks
Star
Notifications
This commit does not belong to any branch on this repository, and may belong to a fork outside of the repository.
3 branches 0 tags

This is my port of DOOM 3 for iOS, running in modern resolutions including the full width of the iPhone X. I have also made a target and version for tvOS to run on Apple TV.

This commit does not need any placeholder resources as it is not an update of an existing id Software port.

You will need to provide your own copies of the base and d3xp directories from an existing instalation of DOOM 3. The latter directory is only needed if you want to run the expansion. You can buy DOOM 3 on Steam here. You can buy the expansion pack DOOM 3: Resurrection of Evil on Steam here. Note that GOG does not sell the original game, they only sell the BFG Edition which is incompatible with this release.

There are two Xcode project files, one for DOOM 3, DOOM3-iOS.xcodeproj, and one for the expansion pack, DOOM3xp-iOS.xcodeproj. You will need to drag your directories into the project and select "Create Folder References". The base folder needs to be added to the DOOM 3 project and target, while both the base and d3xp folders need to be added to the expansion pack project. The folders will be blue if you've done it right: 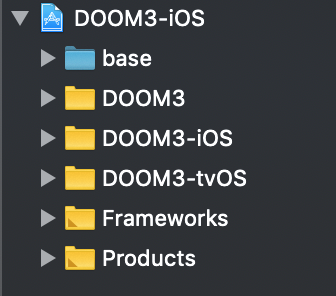 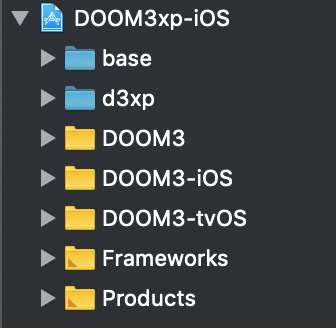 You can read a lengthy blog article on how I did all this here.

This port was based on dhewm3 and uses SDL for iOS. I also referenced to this fork for WebAssembly/WebGL from Gabriel Cuvillier for OpenGL ES code. On-screen joystick code came from this repo by Brad Howe. Font Diablo Heavy available here. I also studied the iOS port of Hedgewars for information on how to use UIKit alongside SDL.

Video of DOOM 3 running on an iPhone X