A web app for finding a rating scale between two arbitrary things. Ever wanted to rate something on a scale of David Hasselhoff to the Eiffel Tower? Well now you can.

Dave Pagurek and I made this for the TerribleHack Winter 2015 hackathon. I wrote the backend, Dave wrote the frontend. I later rewrote the backend in Nim and then D to make it cleaner and easier to deploy as well as learn new languages.

Try it out at http://ratewith.science! 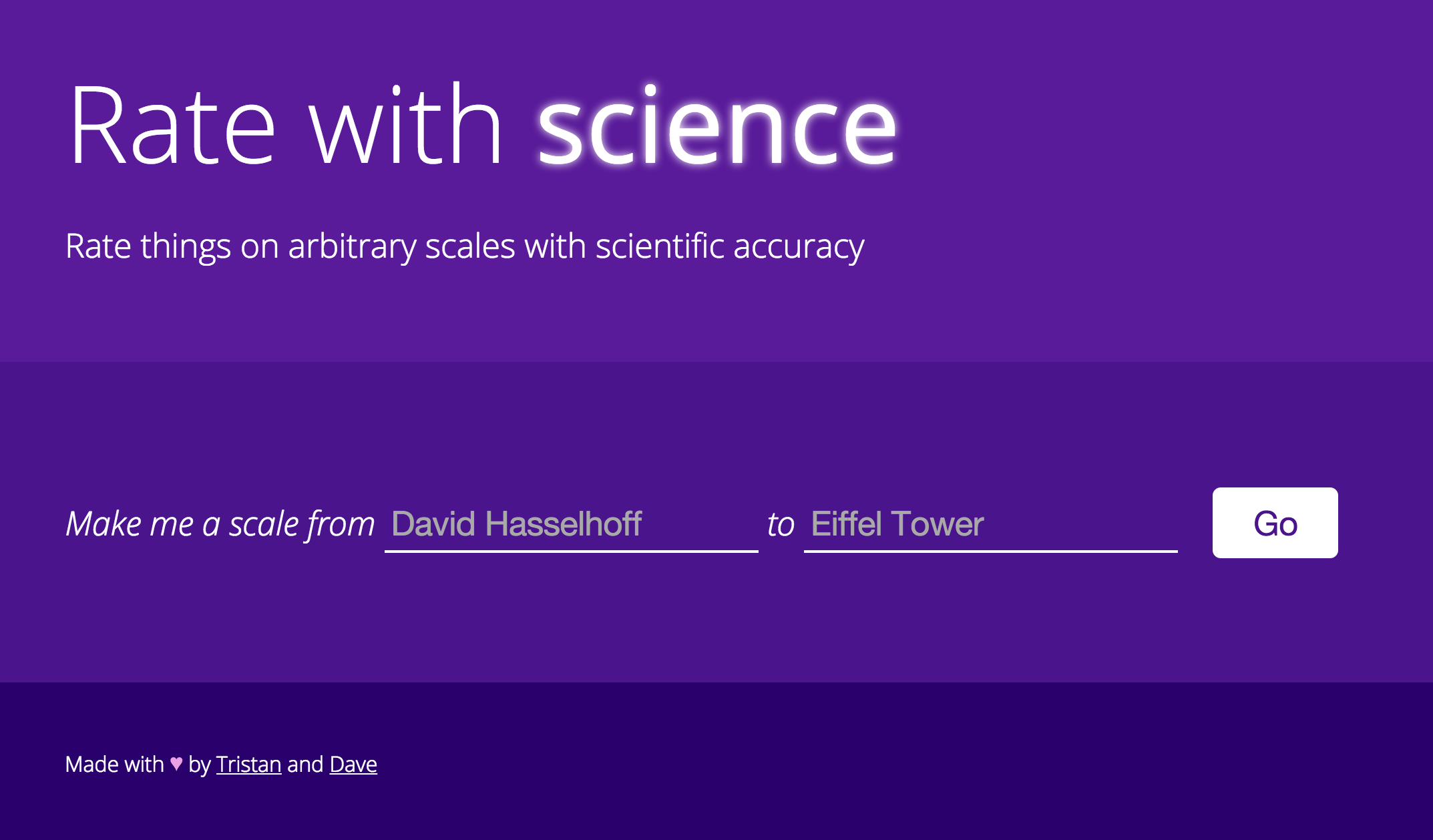 Rate With Science uses shortest path graph searching on the Wikipedia link graph to find connections between different things. It uses an efficient binary link graph format created by my wikicrush project so that I can fit the entire graph into around 500mb of memory and do very fast breadth first searches on it.

Dave's JS sends my backend two endpoints via AJAX and my backend gives back a list of articles forming a path or an error in the rare case it can't find a path.

The frontend is written in static HTML and JS with CSS3 animations and properties for extra fancy design. The backend is currently written in Rust, on its fourth rewrite. Previously I had written it in D, Nim and Rust (when I was first learning) for fun. However the D codebase kept breaking and it was hard to deploy on my VPS, so I rewrote it in Rust so I could hopefully keep it running more easily.

First the backend translates the given pages into something usable with the binary graph using the wikicrush xindex.db sqlite file. The backend then performs a breadth-first-search on an in-memory buffer of the wikicrush indexbi.bin file. It first tries to BFS through only bidirectional links as these lead to better paths but if that fails it tries a single-direction search. Then it uses the Sqlite database to translate the path offsets it got back into article names and ships them back to the frontend as JSON.

The first rewrite was done in Nim by Tristan as a way of learning the language and make the whole thing less hacky than the old Rust version was. The Nim backend used the Jester web framework to serve Dave's frontend as well as respond to API calls for path finding.

The Original Tech (From the Hackathon)

The backend uses a compiled Rust binary from the ratews_backend project to find a path.

Unfortunately the link between them is a total hack brought about by the fact that Rust is alpha quality, I don't really know how to use it, and it was only a one day hackathon. After hitting the wall that Iron couldn't gracefully handle the global graph data and Sqlite connection between requests because the Sqlite connection type wasn't thread-safe and Iron is multithreaded. I could have worked around this by proper multi-threading and message passing but I didn't know how to do that in Rust and time was running out.

The solution was to make the Rust binary interact over stdin and stdout via a simple text format. Then I wrote a simple Sinatra app in Ruby that served Dave's frontend and shuttled API requests to the rust process over IO pipes and back to the frontend via JSON.

Hackathon's aren't where you go to find clean code... Also all the paths are hard coded absolute paths to the various component projects on my laptops file system...

How To Use It Yourself

Due to me using this as an experiment in trying out new experimental languages, this isn't that easy to deploy. But trust me it's easier with the new D version than the Nim or Rust versions. Steps:

This code is released under the MIT license.