It uses Discord4J, an awesome Java library for the Discord API.

K9 was originally created for a server about Minecraft modding, and its first command was to look up MCP mappings. It still has this feature, but there is now much more!

It also features a complete help system, so figuring out how to use a command is as simple as !help [command].

How do I get K9 in my server already?

Well, if you're lucky enough to know me, just ask. Currently the instance of K9 I run is private, so only I can invite it to servers I personally know the owners of. However, K9 is open source and the build server I use is public, so it's easy to set up your own instance! See the next section for a how-to.

So you want to run your own K9

Great! Before doing anything, make sure you have the latest version of Java 8 installed on the machine that will be running the bot.

And that's all! You should see a lot of console output, and then the bot will be running! To invite it to a server, use the "Generate OAuth2 URL" button on the app page. What permissions you give the bot is up to you, but it does not (currently) need any more than these: 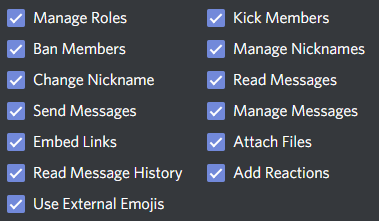 I know this sounds impossible, but I think K9 can be better. How can I help?