A simple experimental utility to estimate the solar potential of building roof surface(s) from a 3D city model stored in CityGML. 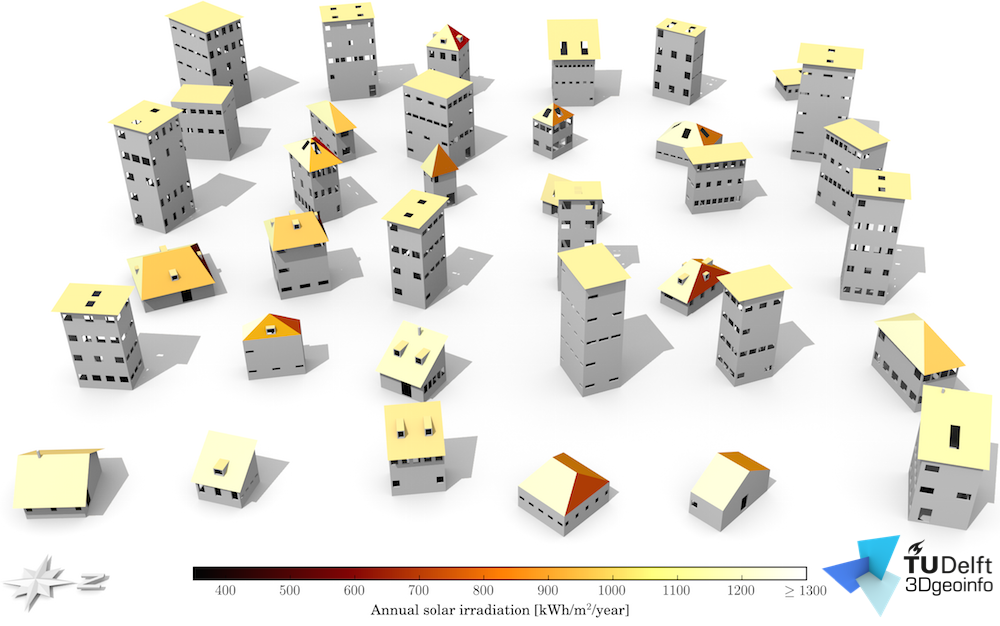 The scripts compute the solar irradiation data thanks to the solpy library.

Please note that this is an experimental research software prototype under continuous development.

The estimation of the solar irradiation of roof surfaces is one of the prominent use-cases of 3D city models. This use-case is important for estimating the feasibility of installing a photovoltaic panel on a roof. Such estimations are usually done on a large-scale, e.g. on the area of a municipality. For instance, see an example in Germany. Further, there are many academic articles that explore this topic.

Despite the popularity of this 3D use-case, there are two drawbacks:

I have created this utility to fill this gap. This experimental software prototype was developed as a part of my PhD research.

This software is free to use. You are kindly asked to acknowledge its use by citing it in a research paper you are writing, reports, and/or other applicable materials; and mentioning the 3D Geoinformation group at the Delft University of Technology. If you used it for making a nice publication, please cite this paper:

I would be very happy to hear if you find this tool useful in your workflow. If you find it useful and/or have suggestions for its improvement, please let me know. Furthermore, I am maintaining a list of users that I notify of corrections and updates.

This short section gives an overview of the estimation of the solar irradiation, for understanding how the utility works.

The solar irradiation is the amount of solar energy received over a given time (e.g. one year) on an area (e.g. one metre squared). Contemporary solar panels are able to utilise 10-15% of this energy and convert it to electric energy.

The three components of solar radiation

The solar radiation is composed of three components:

The global solar radiation is the sum of these three components.

Clouds have a significant influence on the radiation. Therefore it is important to know the weather conditions on a location in order to account the estimation. For this, historic data is usually used.

The yearly irradiation on a surface

The magnitude of the three radiation components is different depending on the day and time (i.e. position of the sun). Hence, the yearly irradiation is computed by integrating the magnitudes over the year, i.e. estimating the irradiation for many epochs during the year and summing them up (e.g. every 1 hour for every day).

The solar radiation differs depending on the tilt and orientation of a surface. The plot below show that TOF (tilt-orientation-factors) for Delft in the Netherlands. It is visible that the difference between the irradiation on differently tilted and oriented surfaces is significant. 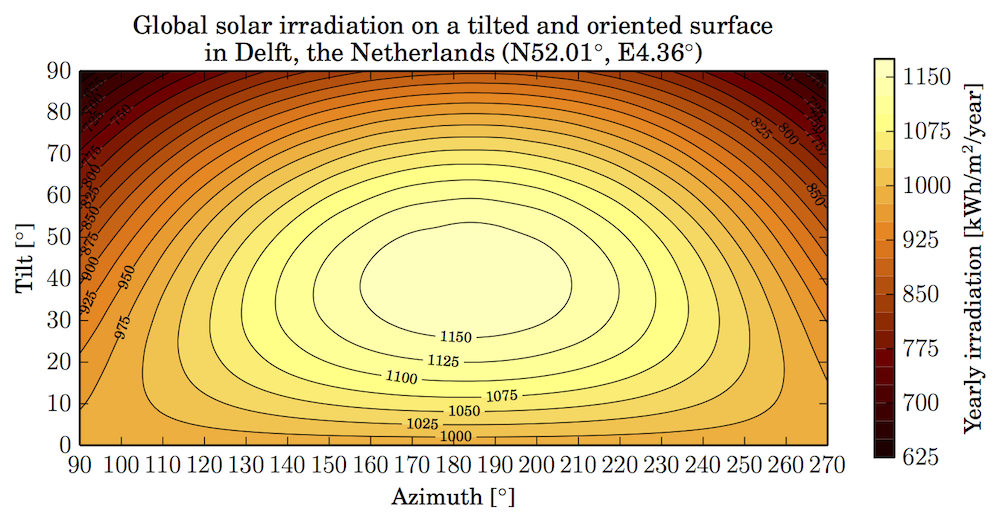 You can use Solar3Dcity to compute the optimal tilt for almost every location on Earth: 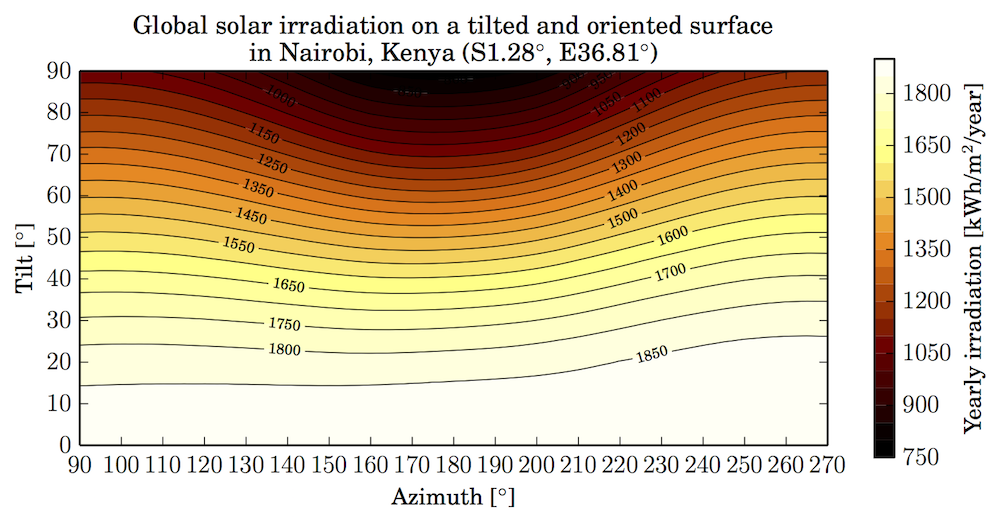 The global solar irradiation on a tilted and oriented surface at location can be estimated from the following components of the surface:

The role of 3D city models

3D city models are very important for the following reasons:

This is precisely what these scripts utilise.

The software has been developed on Mac OSX in Python 2.7, and has not been tested with other configurations. Hence, it is possible that some of the functions will not work on Windows and on Python 3.

Overview of the workflow and advantages

The utility does the following:

It is important to note the following:

The code is composed of multiple Python files. Please follow these steps.

Modify the parametres in the code

There are some parametres that need to be modified prior to running the code.

Without these changes, the code will give wrong estimates. I plan to automate this in future work.

(Optional:) Compute the TOFs to optimise the estimations

In case you have a large dataset (>1000 buildings), it is advised that first you compute the tilt-orientation factors. Then the software samples and interpolates the value of the yearly irradiation directly from this precomputed dataset. This is done with the TOF.py script.

where -lat and -long are the latitude and the longitude of the location of your models (it is not extracted from them), and -s the resolution of the computations in degrees. The smaller the value, the better the estimation. If you have time put this to 1, if not put to 10 or 15.

Here are some examples of how much time it takes my computer to precompute the TOFs depending on the resolution:

The TOF will be saved as a file TOF.dict in the same directory. The code will then sample the irradiation directly from the precomputed values, saving you a lot of time.

If you toggle the -p option at the end you will get the plot as the one above. (Please note that the plot above has been computed with the option of -s 1, i.e. a very high resolution, so if you use a coarser resolution you will not get a very nice plot.)

If you have precomputed the factors, and you just want to plot them run the following:

The Perez et al. (1990) empirical model is used for the estimations.

The main part: Estimate the solar irradiation of CityGML buildings

Put your CityGML file(s) in a separate directory. If you have precomputed the TOFs, run this:

The tool will run the analysis on all *.gml it finds in that folder. The new files with the information on the solar irradiation of the building and its roof surface(s) will have the extension -solar.gml. That's it.

If you have not precomputed the TOFs, run this instead:

to obtain the same result.

Please note that this will increase the computational time, as shown in the following table.

Hence, if you have a large dataset, you might want to precompute the tilt-orientation factors.

This is not really a part of the utility, but might be helpful to understand how the estimation of the solar irradiation works. The script dailyplot.py plots the global solar irradiance on a tilted and oriented surface at a location on a specific date. Multiple locations, multiple surfaces, and multiple dates are possible in order to compare the settings.

Go through the code to adjust the settings and then simply run: 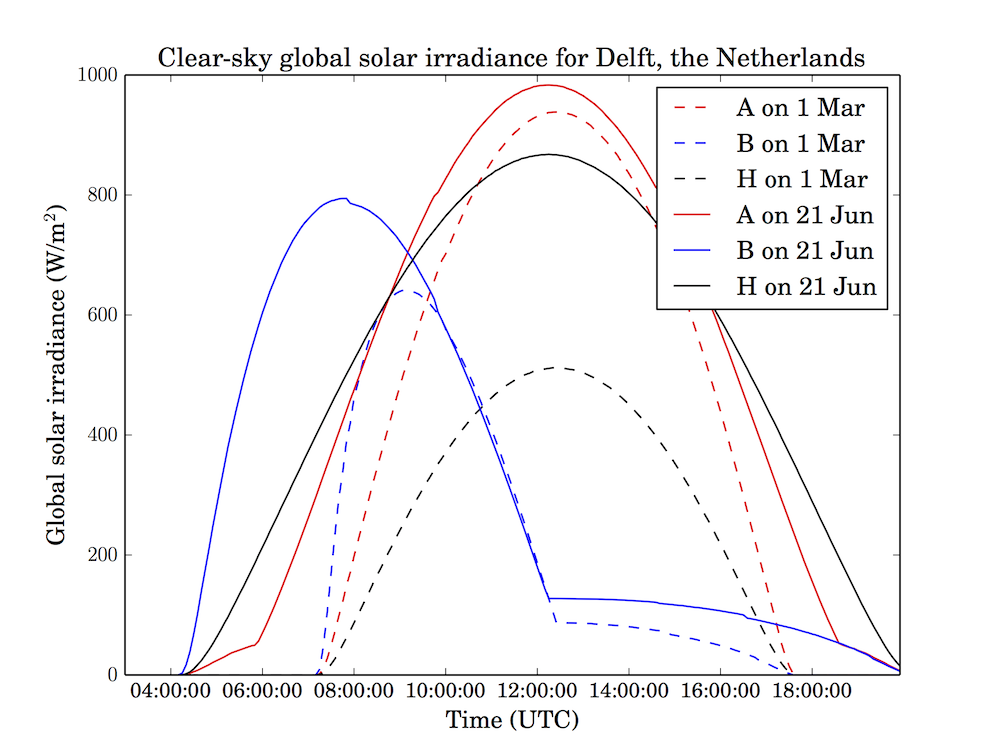 This is the magnitude of the irradiation during the day. Solar3Dcity integrates these values over the year in order to estimate the yearly irradiation.

It is important to note that this is an experimental research software. This means that it is not user-friendly, it has some limitations, and I cannot provide extensive support.

Solar3Dcity does not estimate the shadowing from other objects (e.g. other buildings, chimneys, dormers, ...), which might be severe. This was out of scope of this work. If you have a suggestion how to efficiently implement this feature without sleepless weekends, please let me know.

The input/output files are read/stored in CityGML 2.0. Support for legacy versions 0.4 and 1.0 is not available.

This software has been programmed with Python 2.7. Version 3 is not supported.

Please do not use CityGML files with more than one LOD because the utility does not split between representations. However, multi-LOD files are seldom, so this should not be a problem.

The results of the computations are added directly to the <gml:Polygon> and <bldg:Building> level. I am aware that this does not conform to CityGML. I did not have time yet to make an ADE or to store the data as generic attributes.

This utility just stores the data of the solar estimations directly in the CityGML file. It does not have any GUI. However, data can be visualised by converting this to an enhanced OBJ with my utility CityGML2OBJs. An example is shown in the beginning of this file and here below. 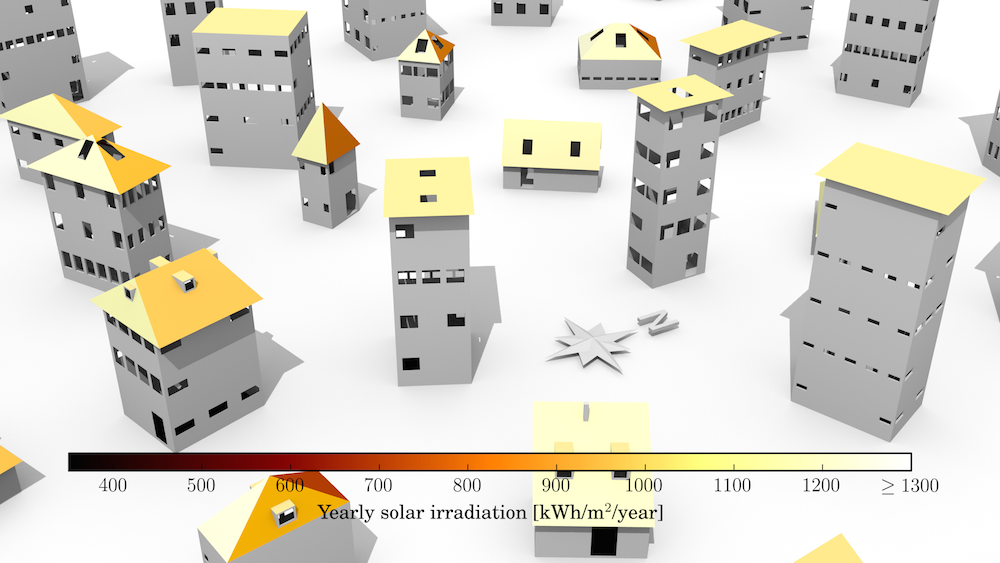