turbo.js - perform massive parallel computations in your browser with GPGPU.

turbo.js is a small library that makes it easier to perform complex calculations that can be done in parallel. The actual calculation performed (the kernel executed) uses the GPU for execution. This enables you to work on an array of values all at once.

turbo.js is compatible with all browsers (even IE when not using ES6 template strings) and most desktop and mobile GPUs.

For a live demo and short intro, please visit turbo.github.io.

For this example, which can also be found at the aforementioned website, we are going to perform a simple calculation on a big-ish array of values.

First, include turbo.js in your site:

or pull turbojs via npm to use it in your project.

turbo.js only has two functions that can be called by your code. Both are contained within the turbojs object. If this object is not initialized, something went wrong. So the first step is to check for turbo.js support. You can optionally check for exceptions thrown by turbo.js, which will provide further details on the error.

Now we need some memory. Because data has to be transferred to and from GPU and system memory, we want to reduce the overhead this copy operation creates. To do this, turbo.js provides the alloc function. This will reserve memory on the GPU and in your browser. JavaScript can access and change contents of allocated memory by accessing the .data sub-array of a variable that contains allocated memory.

For both turbo.js and JavaScript, the allocated memory is strictly typed and represents a one-dimensional array of 32bit IEEE floating-point values. Thus, the .data sub-array is a standard JavaScript Float32Array object. After allocation, you can interact with this array however you want, except for changing it's size. Doing so will result in undefined behavior.

Running this, the console should now display [0, 1, 2, 3, 4]. Now for our simple calculation: Multiplying each value by nFactor and printing the results:

That's great. But sometimes you need to return more than a single value from each operation. Well, it might not look like it, but we've been doing that all along. Both commit and read actually work on 4-dimensional vectors. To break it down:

The nice thing about GLSL is that all operations are overloaded so that they can work with vectors without the need to deal with each element individually, so

Neat, huh? Of course there are other types of vectors in GLSL, namely vec2 and vec3. If you create a bigger vector and supply a smaller one as a parameter, GLSL will automatically align the values:

So we'll use that right now. If you visit the website mentioned above, you will get results from a simple benchmark comparing JS to JS + turbo.js. The benchmark calculates random points on a mandelbrot fractal. Let's break down what happens there, starting with the JavaScript code:

For each run, the first two values of each vec4 of the allocated memory are filled with random coordinates as the input for the fractal function:

For each operation, the result will be a greyscale color value. That will be written to the third (i.e. b) component of each vector:

The fractal is calculated to the iteration depth of sampleIterations. Now let's take a look at the turbo.js code performing the same task:

Notice how easy the JS code can be translated to GLSL and vice versa, as long as no exclusive paradigms are used. Of course this example is not the optimal algorithm in JS or GLSL, this is just for comparison.

GLSL code is compiled by your GPU vendor's compiler. Usually these compilers provide verbose error information. You can catch compile-time errors by catching exceptions thrown by turbo.js. As an example, consider this invalid code:

This will generate two errors. The first one is bar being undefined. The second one is a type mismatch: commit expects a vector, but we've just given it a float. Opening your browser's console will reveal the error: 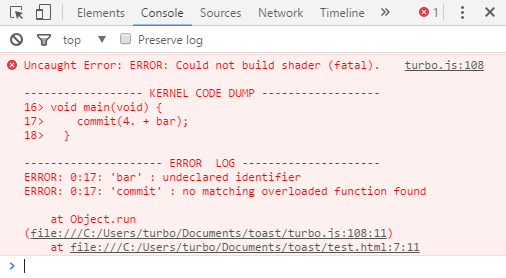 Make sure to familiarize yourself with the GLSL standard, which can be found at OpenGL.org.

Simpler shaders perform better than complex ones. In particular, if you can remove an if statement from a shader, that will make it run faster. Division and math functions like log() should be considered expensive too.

Many C shorthands apply to GLSL. Having said that, this also applies:

However, nowadays even mobile devices possess powerful GPUs that are capable of running even relatively complex shader programs. Moreover, because shaders are compiled, the eventual machine code that actually runs on the hardware may be highly optimized. What may seem like an expensive function call may in fact compile into only few (or even a single) machine instructions. This is particularly true for GLSL functions that typically operate on vectors, such as normalize(), dot() and mix(). The best advice in that regard is to use the built-in functions, rather than try to implement, for example, one's own version of a dot-product or linear interpolation, which may in fact compile to larger and less optimized machine code. Finally, it is important to keep in mind that GPUs are constructed to do complex mathematical calculations in hardware, and therefore, may support math functions, such as sin(), cos() and other, through dedicated machine instructions.

turbo.js - perform massive parallel computations in your browser with GPGPU.