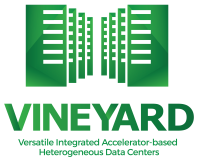 This is the source code of the Maxeler-based Demo implementation of the Inferior Olive Model developed within Neurasmus B.V. (which operates under the holding of the Neuroscience department of the Erasmus MC) in the context of the H2020 Vineyard EU project:

The BrainFrame demo demonstrates the simulation of an Inferior Olive network model. A crucial component of the Olivorcerebellar circuit imperative for the control and synchronization of motor functions. The model is based on a highly complex, bio-physically meaningful and computationally demanding neuron model (Hodgkin-Huxley) and also supports Gap Junction connectivity between neurons. It supports maximally a netwrok of 7680 neurons and has a real-time capability (simulating the network with real-time speed) of about 400 neurons. The application supports programmable connectivity between neurons as well as fully programable neuron conductances. It has been tested and validated with Maxeler tools 2016.1.1 and DFE MAX4 hardware.

Documentation of the project.

License of the project.

Ensure the environment variables below are correctly set:

To compile the application, run within the CpuCode folder:

Currently the demo is run and tested on a Maia DFE card.

To excute the application run :

The network size, simulation time and neuron initial states can be edited from the CPU code.