Before we expose a TurnKey system to a hostile Internet, we first need to initialize it. This will setup passwords, install security updates, and configure key applications settings.

This initialization process can be interactive or non-interactive depending on what works best given where and how the system is deployed.

A configuration wizard shows a short sequence of simple text dialogs that look primitive but provide a quick step-by-step process that works anywhere and requires only the bare minimum of software dependencies - a big advantage for security sensitive applications: 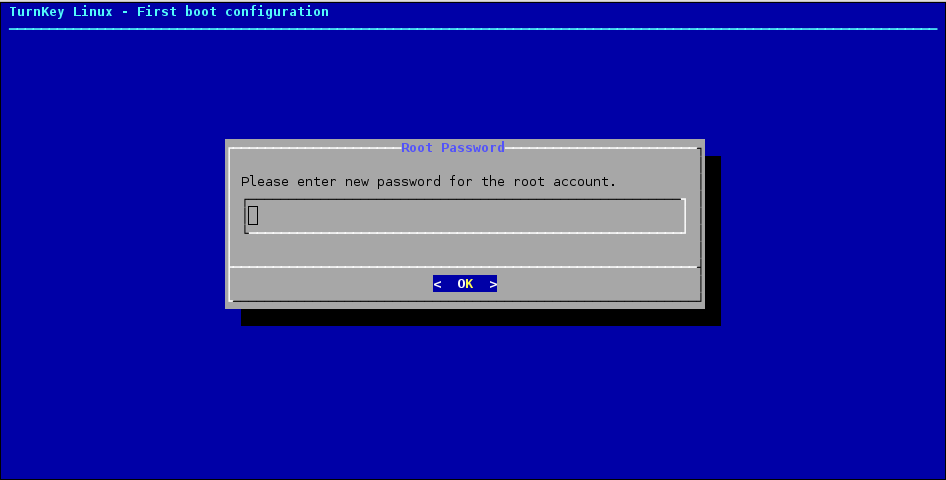 All software is potentially buggy but we can minimize the risk by intentionally favoring simplicity over fancy eye candy.

The configuration dialogs run in one of two places:

The TurnKey Hub streamlines deployment by preseeding system initialization settings with values the user provides before launching an instance through the Hub's cloud deployment web app.

This means when the system boots for the first time it doesn't need to interact with the user through text dialogs.

Preseeding is well documented and may be used by other hosting providers or private clouds in a similar way to streamline deployment.

Under the hood: everything you wanted to know but were afraid to ask

Users wishing to preseed headless builds (e.g. LXC) will find the Preseeding section below of value. Otherwise, the preceding introduction explained everything mere mortals need to know about the system initialization process.

The rest of the documentation is intended for:

Inithooks itself is as generic and barebones as possible, leaving the bulk of functionality up to the appliance specific "hook" scripts themselves,

The inithooks top-level init script is executed early on in system initialization, at runlevel 2 15. This enables configuration of the system prior to most services starting. This should be taken into consideration when developing hook scripts.

Scripts in the firstboot.d sub-directory are executed under the following conditions:

Scripts that are in the everyboot.d sub-directory run on every boot. We try to minimize the number of scripts that live here because they're basically a poor man's init script and real init scripts are often a better idea.

On headless deployments the user needs to login as root to complete the appliance initialization process, but how do you login as root?

Not a problem if you're using OpenNode or ProxMox - those systems prompt you to choose a root password before deploying a TurnKey image.

Other virtualization / private cloud solutions should be able to use their existing deployment scripts to set the root password, just like they already do with Debian and Ubuntu.

Another more advanced option is to "preseed" the /etc/inithooks.conf file in the apliance's filesystem before booting it for the first time. This lets you leverage inithooks to pre-configure not just the root password but also the database and application passwords, admin email, domain name, etc.

However note that using preseeding deactivates the "initilization fence". If you're using preseeding TurnKey assumes you've already interacted with the user some other way (e.g., web control panel) to get the preseeded configuration values.

By default, when an appliance is run for the first time, the firstboot scripts will prompt the user interactively, through the virtual console, to choose various passwords and basic application configuration settings.

It is possible to bypass this interactive configuration process by creating /etc/inithooks.conf in the appliance filesystem and writing inithooks configuration variables into it before the first system boot. For example:

Don't worry about leaving sensitive passwords in there: after the first boot, inithooks blanks /etc/inithooks.conf out so important passwords aren't accidentally left in the clear.

Below is a list of firstboot hooks. All interactive hooks have preseeding options to support cloud deployment, hosting and ISV integration.

If not preseeded, the user will be asked interactively. The SKIP and FORCE options should be self explanatory. Note that secupdates is automatically skipped when in live demo mode.

Most inithooks that are configurable are interactive, however not all. Non-interactive hooks that can be adjusted via preseeding are marked below with an asterisk ('*').

Initihooks that are not relevant to a particular appliance or build will simply be ignored.

Note that almost all appliances have their own application specific secret-regeneration hooks which will run regardless.

Common to all appliances:

Linux and Samba user management is separate and discrete. Previously by default Samba users were mapped 1-1 with Linux users and Samba supported syncronization of passwords between the Linux and Samba users (so essentially the difference between the 2 user management systems was hidden from the end user). However due to a significant security issue, this module has been removed. Samba4 has moved to prioritize support for AD integration (which uses a different paradigm - all Samba users are contained within a single Linux user account).

So you're creating a new appliance and want to add initialization hooks. Awesome! Here are some examples to get you going.

The following example is used in the Joomla3 appliance. It regenerates the secret, and sets a random mysql password for the joomla user.

The following example is used to set the root password in all appliances. If ROOTPASS is not set, the user will be asked to enter a password interactively.