Plug-in that implements the communication aspects of the McLaren demo at GDC 2016.

Plug-in that implements the communication aspects of the Epic Games McLaren demo at GDC 2016. 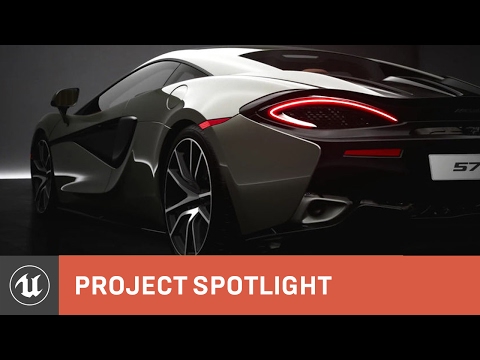 This plug-in contains the code that was used to implement the communication between the McLaren configurator on PC and its companion app on iPad. We provide it only for inspiration and as a learning resource for those who are curious to know how the feature was implemented. This plug-in won't be useful for anything else, but you can use it as a basis for your own projects and experiments.

For a brief introduction about the making of this project, please check out our Twitch livestream on YouTube. An overview of the programming details starts at 43:45.

Make sure to pull the Tag that matches your Unreal Engine version. If you sync to Master the code may not compile, because it may depend on Engine changes that are not yet available in the UE4 Master branch.

This plug-in was last built against Unreal Engine 4.17 and works on all platforms.

The configurator and the companion app were implemented using different versions of Unreal Engine 4, which prevented us from using simple network replication to have the two communicate with each other. As a workaround, we decided to use the Unreal Message Bus instead, a system in Unreal Engine 4 that has been around for a while, but is currently only used in Unreal Editor and Unreal Frontend. Because it is still somewhat experimental, we've been keeping it under wraps.

As described in the Twitch livestream, the purpose of the message bus is to provide a mechanism for distributed applications to communicate with each other while hiding the implementation details of low-level network transports, such as sockets, IP addresses, and port numbers in order to provide a better experience to the user. As a programmer, however, even messages are still too low-level.

What we are really interested in is something that works similar to network replication: the programmer simply calls a C++ function, which may then execute on another computer. We are currently implementing such a system on top of the message bus: MessagingRpc. Although it is complete overkill for something as simple as the McLaren demo, we decided to use it anyway as an early test bed. Most communication therefore happens not via messages directly, but via RPC calls that send messages under the hood.

The plug-in contains two classes, AConfiguratorGameMode and ACompanionGameMode, that expose a number of Blueprint functions in the configurator and companion app respectively. For convenience, we put both into a single plug-in, which is compiled seperately for each project. The game designer then selects the appropriate game mode in each project. Because the message bus implementation slightly differs between the two, we had to add a small hack to make sure the code compiles in both projects.

The connection from the companion app to the configurator happens automatically in ACompanionGameMode::HandleTicker, which continuously pings the message bus for available configurators. To keep things simple, this discovery mechanism does not support multiple configurators on the network. It assumes that there is only one instance at a time and connects to the first one that it finds.

MessagingRpc is still in an early stage and missing some important features. In particular, it does not currently have a code generator in UHT that generates the messages from C++ declarations of RPC functions. We therefore had to code all the messages by hand. In order to get the project up and running quickly, we also made a big simplification in that there is only a single command that contains all possible user interactions (FConfiguratorCommandRequest) distinguished by an enum value (EConfiguratorCommand).

In the future, there will be syntax to declare RPC functions, and messages (one per function) will be generated automatically.

No support is provided for this plug-in, and we're not planning to add any new features. If you have questions about the McLaren project, please visit the UE4 Forums, thanks!

Plug-in that implements the communication aspects of the McLaren demo at GDC 2016.