eliza.js is a Javascript clone of ELIZA, Joseph Weizenbaum's simulation of a Rogerian psychotherapist. It is an attempt to properly learn javascript, so don't blame me if it's godawful.

ELIZA was one of the very first chatterbots, an early attempt to use natural language processing to emulate human responses. Programattically it's really very simple, and the majority of the "intelligence" is embodied in the script.

Charles Hayden has an excellent explanation and sample script on his website; this is what I used as a reference.

Loosely speaking, an input phrase is broken down into tokens, and a set of weighted keywords is searched for in the token list. Each keyword has an associated set of match patterns ("decompositions") and responses which are tried in turn against the input phrase. If one matches, the response is constructed (sometimes using captured segments of the input phrase) and returned. If none match, then the system moves on to the next decomposition, and the next keyword, until a match is found.

Some decompositions store their response for later, giving ELIZA the appearance of returning to earlier topics. Others redirect to specific keywords.

An Eliza object requires a client implementing the .say() and .quit() methods, and a script of fiendish complexity (see lib/eliza/script.js for the more-or-less original ELIZA script as translated into a bodgy JSON representation).

Call .say() on the Eliza instance, and it will call .say() right back with some gibberish. If you utter one of the quit phrases as specified in the script, Eliza will call the client's .quit() method.

I had a stab at implementing this using a strictly tell-don't-ask style, mainly to appease Tom Stuart (the evil one). It actually worked out quite nicely I think, the sequence diagram looks mostly like this: 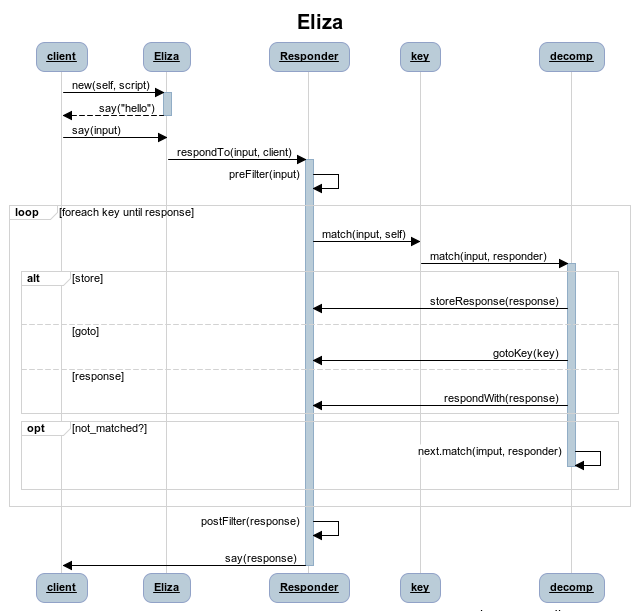 As far as I can tell there's only one place where one type of object gets and sets properties on another type, and that's in the LinkedList implementation (it's not clear in the diagram above: each key has a linked list of decomps. The key calls .match() on the first decomp, which passes on to the next decomp unless it can find a match).

Most of the grossness is in Eliza itself, most of the responsibilities of which would be handled by a proper script parser if I had any pride.