Firewall bypass script based on DNS history records. This script will search for DNS A history records and check if the server replies for that domain. Handy for bugbounty hunters. 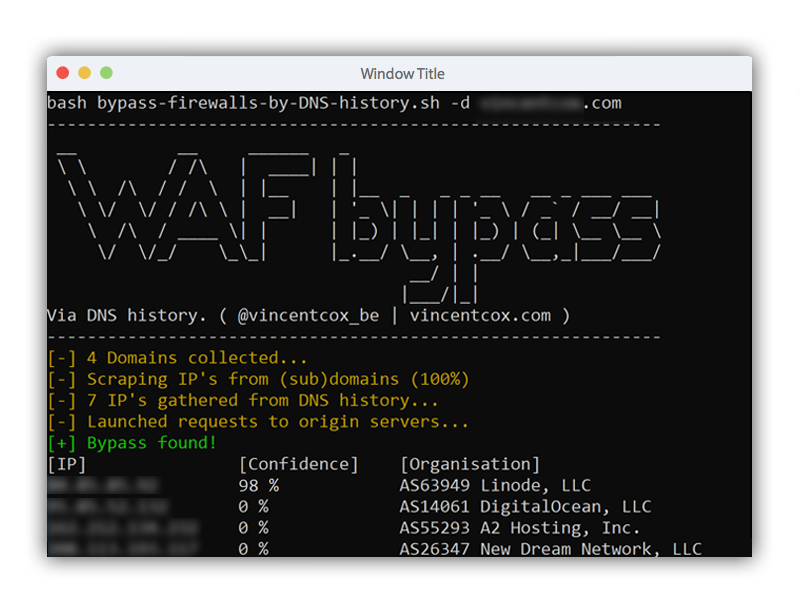 This script will try to find:

This script (ab)uses DNS history records. This script will search for old DNS A records and check if the server replies for that domain. It also outputs a confidence level, based on the similarity in HTML response of the possible origin server and the firewall.

The script also fetches the IP's of subdomains because my own experience learned me that subdomain IP's sometimes point to the origin of the main domain.

To illustrate what we define as WAF bypass, look at the scheme below.

This script tries to find that origin IP, so you can connect directly to the origin webserver. Attacks like SQL injections or SSRF's are not filtered and can be successfully, in contrary when there is a WAF in between which stops these kind of attacks.

When you find a bypass, you have two options:

From this moment, your HTTP traffic goes directly to the origin webserver. You can perform a penetration test as usual, without your requests being blocked by the WAF.

How to protect against this script?

For who is this script?

This script is handy for:

Web services used in this script

The following services are used:

Why in Bash and not in Python?

It started out as a few CURL one-liners, became a bash script, extended the code more and more, and the regret of not using Python extended accordingly.

I find more subdomains with my tools?

I know. I cannot expect everyone to install all these DNS brute-force and enumeration tools. In addition, I don't know beforehand in which folder these tools are placed or under which alias these tools are called. You can still provide your own list with -l so you can feed output of these subdomain tools into this tool. Expected input is a full subdomain on each line.

Firewall bypass script based on DNS history records. This script will search for DNS A history records and check if the server replies for that domain. Handy for bugbounty hunters.