Sign up for free See pricing for teams and enterprises
Encrypted or password protected bootloader based on lufa and Arduino caterina.
Find file

This is a modified arduino caterina bootloader that allows itself to be locked and unlocked from the user space application (or any arduino sketch). This was developed to allow automatic upgrades to our AnyKey device running on kickstarter now https://www.kickstarter.com/projects/715415099/anykey-the-usb-password-key. But it's generic enough to be used on any arduino leonardo or atmega32u4 project as well. 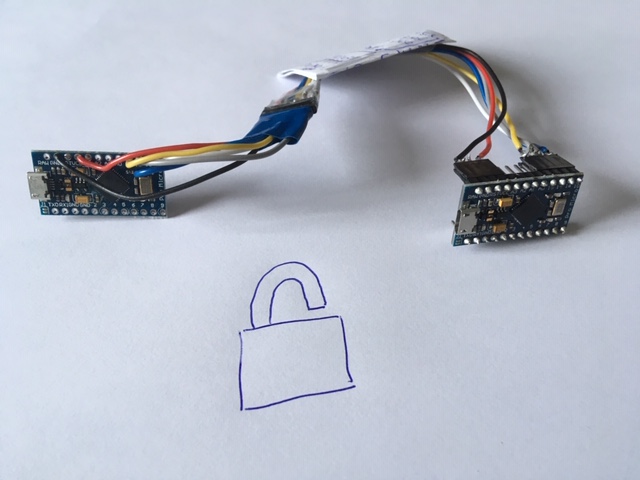 By setting the right EEPROM byte you can disable or temporarely enable or fully unlock all bootloader features like reading, writing to flash, eeprom, fuses etc. In this picture you see an example of an arduino being used as ISP to flash another similar arduino. By protecting the bootloader on the programmer ISP you can't accidentally loose your trusty programming device that allowed you to flash chips (see examples for full example isp sketch). It's just an example but there are many use cases for a protected lockable bootloader. 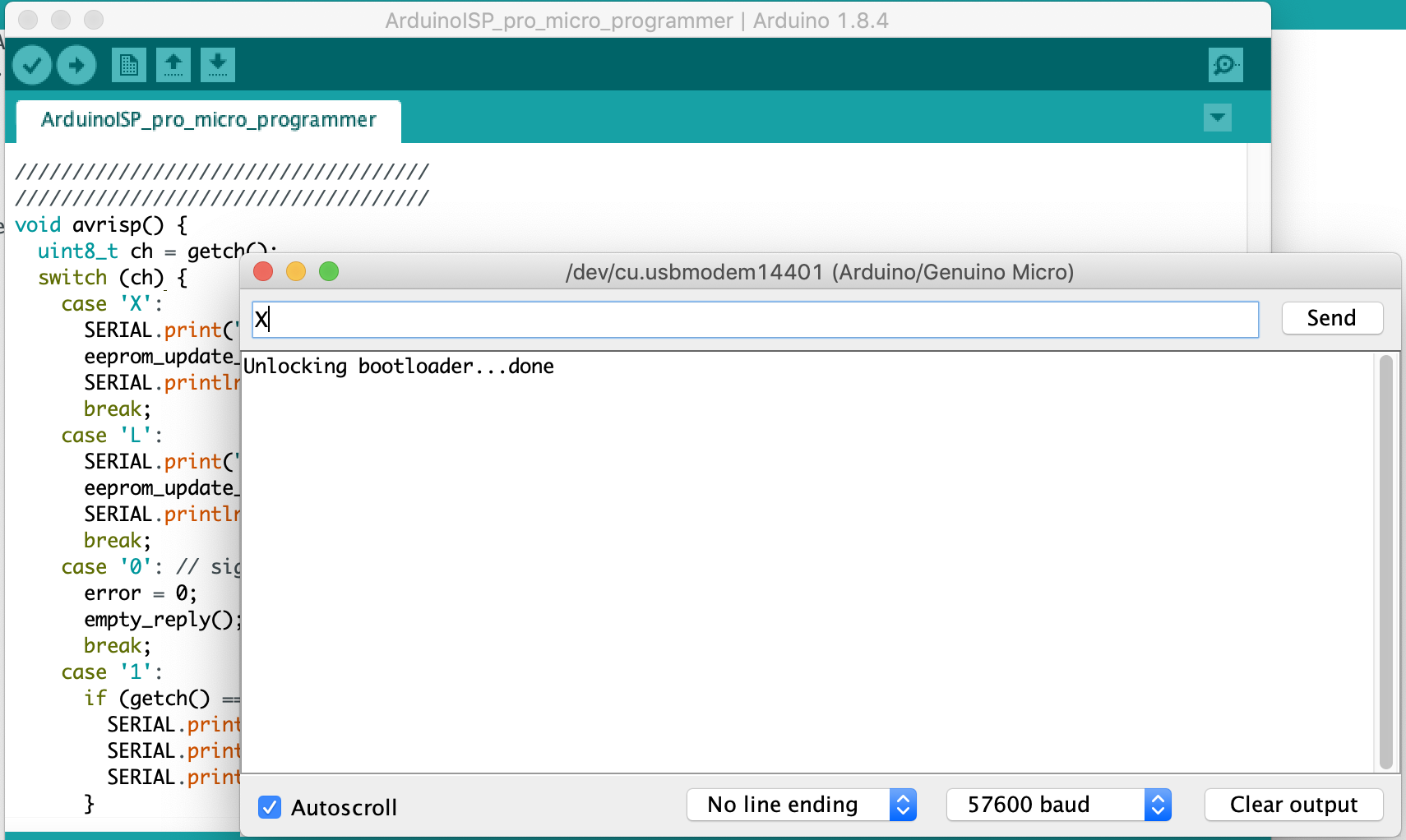 Here we unlocked our programmer and this allows updating it's firmware or making changes. 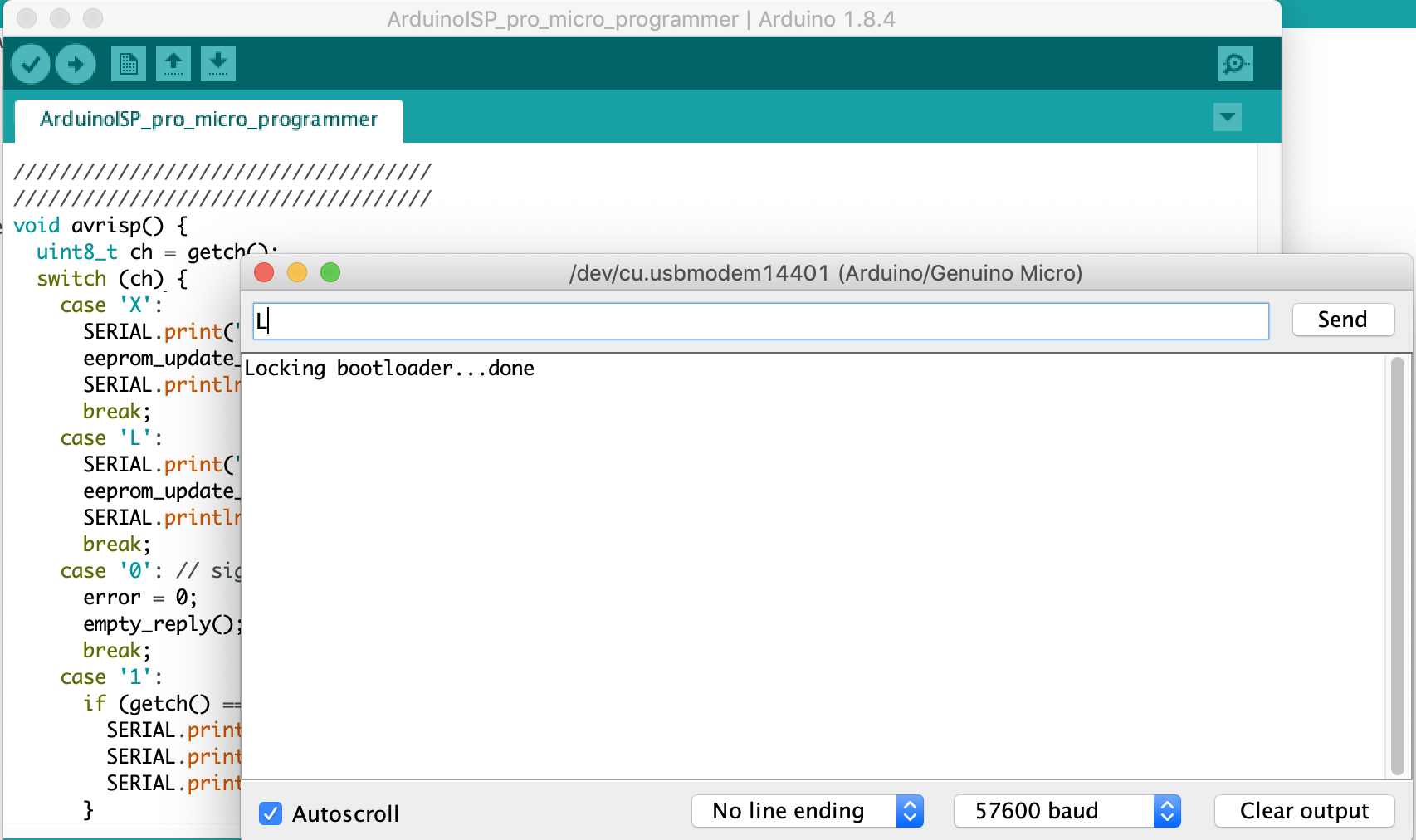 By just typing L we fully lock the bootloader so you can't accidentally overwrite your master ISP programmer.

This results in an anykey.hex file that has the bootlocking functionality. You still need to add an empty sketch and combine the hex file into one larger hex file. Luckily for the lazy this is already done and saved as anykey_bootloader.hex in this repo.

To flash the lockable bootloader there is also an example script in the anykey directory flash_fast.sh. This uses avrdude and an arduino as isp to get the job done. Feel free to use another programmer and just update the avrdude command here. The flash_fast.sh also sets the lock bits LB1 and LB2 so you cant flash with external ISP anymore etc. You can only undo this by doing a chip erase (which is allowed using ISP).

How it was done

We first wanted to build in a challenge-response type protection inside the bootloader itself to unlock but we ran out of flash space (bootloader starts at 0x7000 and current arduino caterina is already close to that). We managed however to squeeze out some bytes with latest avr-gcc and using -Os flags. Then we added a way to disable and enable the bootloader from within a sketch by sacrificing one eeprom byte at address 1023 (the last byte). This way the sketch can implement any complex or simple scheme to lock and unlock the bootloader depending on the application. For our anykey device we plan on using a SHA-HMAC1 challenge response. However a plain simple example is also provided in the examples directory (more info down this page)

The byte at 1023 pos in EEPROM is now used to signal the bootloader if is allowed to start. With the default value of 0xFF (which eeprom has for all bytes when you do chip erase) the bootloader is active and functions exactly like Caterina. Meaning you can use avrdude and other tools to read/write etc. However once you want to protect your bootloader you can set the last eeprom byte to 0x187 (murder! ;) ) and then the bootloader jumps strait to the sketch without doing anything. This way you can't read nor write to your chip using usb. Combined with lockbits LB1 and LB2 (which de-activate external reading/writing with ISP) this is an effective way to protect the contents of your flash and eeprom data.

It doesn't always have to be about protecting your secret data (keys, or hashes or passwords) on the chip. Another example I bumped into myself is when you use a second arduino as an ISP. This is handy but sometimes you can overwrite the ArduinoISP accidently if you choose the wrong port. One way would be to not use a bootloader on your programmer. But that would make it a little cumbersome to update to a newer version (you need a second programmer to program your programmer etc...).

Well in the examples dir is a nice solution using the anykey bootloader (that works on any arduino leonardo compatible device or rather on any atmega32u4). You basically first flash the anykey bootloader and then use the modified ISP sketch. To unlock the bootloader you open a serial window to your ArduinoISP and just enter 'X'. To lock it you enter 'L'. The effect is if you lock it then you can't accidently flash your programmer anymore.

The changes to ArduinoISP are really small all you need to add is this (and this has already been done in examples folder):

Basically means flashing to atmega32u4 with avrdude. We've put a config and example of flashing in the avrdude folder and a flash script in the anykey folder. Avrdude is a free tool to write firmware.hex files to microcontrollers. You can download avrdude here: https://github.com/sigmike/avrdude This needs to be done only once and places the hex file at the end of the microcontrollers memory starting at 0x7000. The file you want to flash is anykey/anykey_bootloader.hex. After this you can lock/unlock the bootloader at any time provided your sketch has some implemented way to alter the eeprom.

Our own AnyKey configurator GUI will eventually have a stripped down version of the above avrdude tool to allow security updates to the AnyKey dongle itself that are signed official signed hex files. That way you can't brick your anykey and you can rest assured the firmware hasn't been tampered with.

When using this first in your own device with a custom sketch: first test your lock/unlock procedure with either Serial.print's like done above before actually writing to your eeprom. Once you lock the bootloader down you can't change the application (arduino sketch) anymore until you unlock it (and yes it survives power cycles). So make sure you have a reliable way to toggle lock/unlock in some way. This can be done by reading a button, switch, or like in the example a simple serial message or any elaborate challenge-response or proprietary way you can think off. Basically the anykey_bootloader applies the same versatile way of locking that is done with LB1 and LB2 for external programming but using an eeprom byte instead of a fuse.

Worst case if you do lock yourself out due to some bug you can indeed do a chip erase and then reflash bootloader+sketch (that is debugged or one that leaves pos 1023 at 0xFF ). The cool thing is you see that only way out is erasing the entire chip with an external programmer and therefore also the secured information you want to protect. For our anykey device we're contemplating of even setting SPIEN off once the firmware is deemed stable enough. That way you can only use HVP to reset but that requires desoldering the smd chip and having professional equipment and skills. And it would only allow you to reset it to a blank so most likely you'd be quicker with just replacing the chip in this case or calling it a 'brick' ;). The thing is even with SPIEN off and LB1+LB2 you can still update. You need to just always be able to set your toggle byte correctly after which the bootloader is still allowed to update application space.