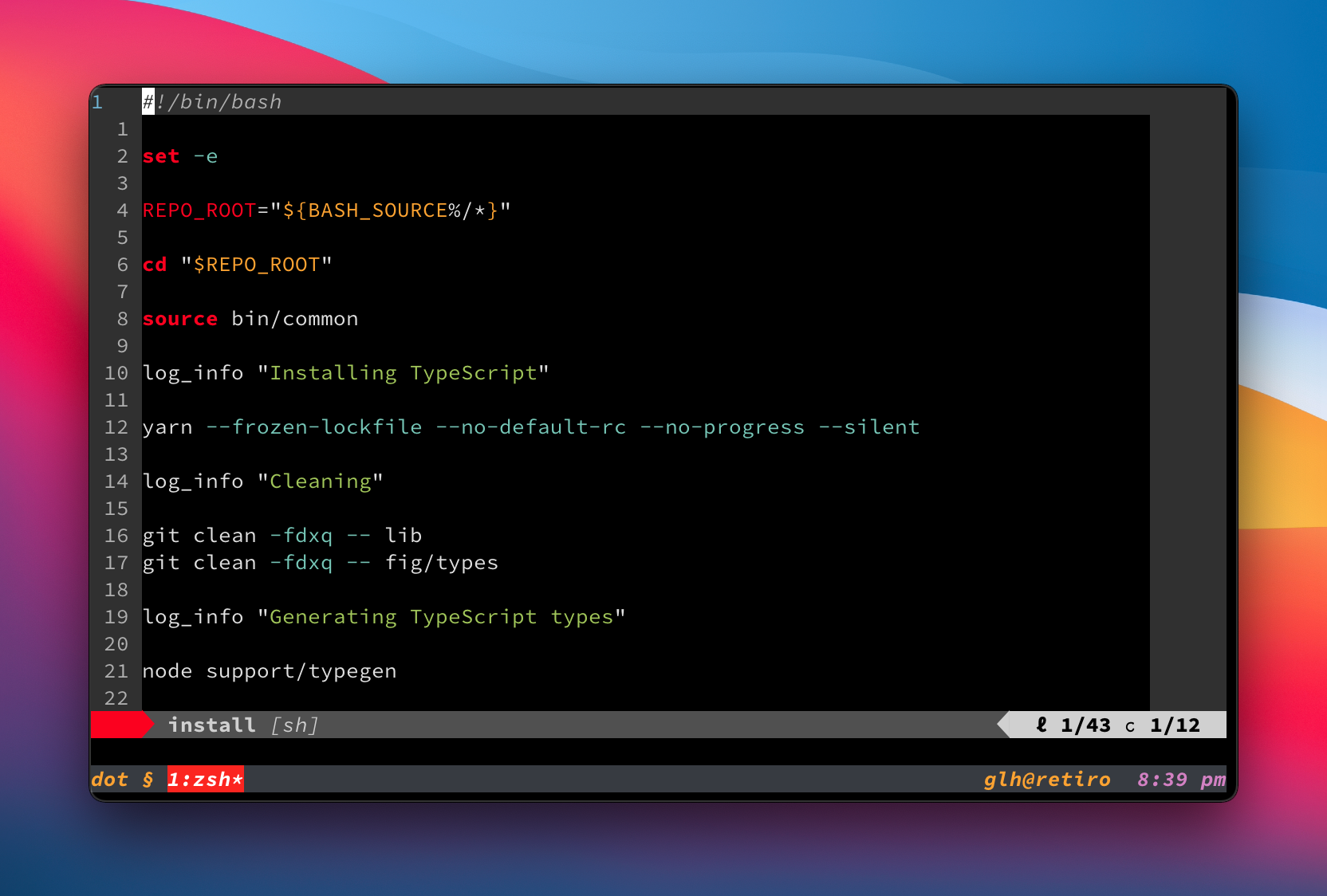 A set of dotfiles that I've been tweaking and twiddling since the early 2000s (under version control since 2009). Characteristics include:

On macOS, the "homebrew" aspect installs a bunch of useful software.

On macOS, Karabiner-Elements is used for the following:

Zsh is configured with the following prompt:

Nested shells are indicated with additional prompt characters. For example, one nested shell:

Root shells are indicated with a different color prompt character and the word "root":

Nesting within a root shell is indicated like this:

If the last command exited with a non-zero status (usually indicative of an error), a yellow exclamation is shown:

If there are background processes, a yellow asterisk is shown:

WARNING: There are lots of different things that can be installed or configured (see the "aspects" directory). Unless you want your machine to be exactly like mine — which is unlikely — you probably don't want to install everything. Maybe you don't even want everything in the "dotfiles" and "vim" aspects. Please inspect the contents of each aspect before proceeding to install it; you may even be better off just looking at the configuration files and stealing the bits that you find interesting or useful (everything is in the public domain, unless otherwise indicated).

At the time of writing, these are the aspects, which you can expect to change over time:

This sets up a local Node environment using n, and then uses Fig to copy the dotfiles and configure the machine.

Note: Given that ~/.gitconfig is included with these dotfiles, any local modifications or overrides that you apply should be added to ~/.gitconfig.local instead; for example:

There are a few useful ./install options:

If Unicode symbols appear missing or corrupted in Vim, first ensure that your terminal emulator supports UTF-8. Then, check to see if you've properly configured your system-wide UTF-8 support.

Then run vim. Unicode in the statusline should be working.

To persist this LC_* variable binding, edit your locale accordingly:

Unless otherwise noted, the contents of this repo are in the public domain. See the LICENSE for details.

The repo is written and maintained by Greg Hurrell <greg@hurrell.net>. Other contributors that have submitted patches include, in alphabetical order: