This repository contains the source code of the worker interface and the data we collected in the following paper:

(Demo: Here, or download the repo and open ESP-AMT.html with a web browser.)

Output-agreement mechanisms such as ESP Game have been widely used in human computation to obtain reliable human-generated labels. In this paper, we argue that a time-limited output-agreement mechanism can be used to create a fast and robust crowd-powered component in interactive systems, particularly dialogue systems, to extract key information from user utterances on the fly. Our experiments on Amazon Mechanical Turk using the Airline Travel Information System (ATIS) dataset showed that the proposed approach achieves high-quality results with an average response time shorter than 9 seconds. 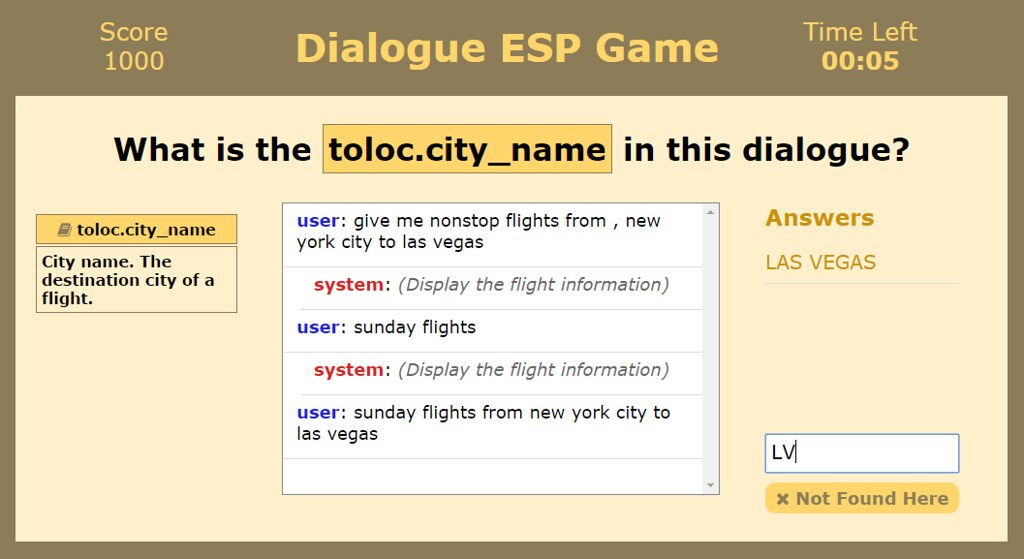 An example source code of our worker interface is in the following folder:

timeInSec: The time limit of each game (in seconds). Default = 20.

In the Experiment 2 of our paper, we conducted lab-based user experiments to evaluate the proposed technology on extracting "food" entities. The end-to-end system is called Eatity.

The following .csv file contains the data we collected in Expetiment 2.

The detailed descriptions of the user study, which was not included in the paper, are described in the follwoing subsections.

Ten Google Hangouts users enter our lab with their own laptops. We first ask them to arbitrarily create a list 9 foods, 3 drinks, and 3 countries based on their own preferences. Then we explain the purpose of the experiments, and introduce five scenarios of using instant messaging:

We also list three types of conversational acts which could emerge in each scenario:

Correspondingly, instructions on the workers' interface is modified as "What is the food_name in this dialog?", and the explanation of food_name is modified as "Food name. The full name of the food. Including any drinks or beverages." In the experiments, our chatbot post 120 HITs with a lifetime of 60 seconds to MTurk upon receiving a text chat. The price of each HIT is $0.1. (Rate = $18 per hour.) We use the interface shown above with a time constraint of 20 seconds.

How to Cite this Work