A basic randomizer of Pokemon TCG (GBC), written in Java. Work in progress.

It randomizes the following ROM:

Currently, it randomizes the following data inherent to Pokemon cards (all options are selectable):

The minimum and maximum HP, retreat cost, and number of weaknesses and resistances is selectable. The HP and retreat cost ranges are selectable for 6 types of evolution classes or stages.

Planned features or tweaks (in no particular order)

I'm no longer working on this. Anyone is free to pick this project up and add new features or fix current issues if he/she wishes

Contributions aren't expected but would always be welcome. 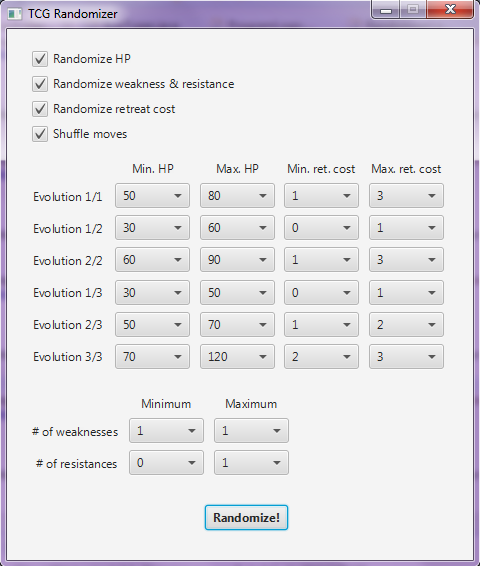 At the moment, the Pokemon TCG ROM detailed above must be in the same directory as the .jar file, and must be named tcg.gbc. Make sure you have a recent version of Java installed on your computer. Execute the .jar file and choose your settings. Finally, click on the "Randomize!" button to generate a randomized ROM that will named tcgrandomized.gbc.