Sign up
Boxes and Bombs is a game about a bunch of boxes and the bombs in some of them.
Find file

Boxes and Bombs is a game about a bunch of boxes and the bombs in some of them. 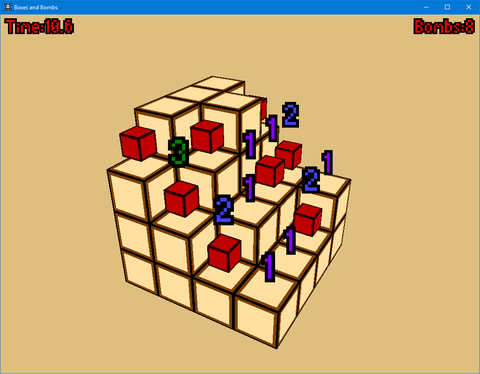 Upon starting a game, the player is presented with a grid of boxes. Revealing a box will either leave behind an empty spot or a number ranging from 1 to 6. The number indicates how many bombs can be found around that particular field. Bombs in diagonal directions are not counted.

The game is won when all boxes are either revealed or marked and lost when a bombed box is revealed.

Running the game requires the installation of the Visual C++ 2017 Runtime (x86), which can be downloaded at https://aka.ms/vs/15/release/vc_redist.x86.exe.

Boxes and Bombs' source code and assets are licensed under the zlib/libpng license. The license details are available at http://www.yeticave.com/links/In9VcBUV/.

The game was developed by Gabor Soos, and it's dedicated to Hexadecimal, who is to be blamed for its existence.