A lightweight, cross-platform, portable, and easy-to-maintain LaTeX distribution based on TeX Live 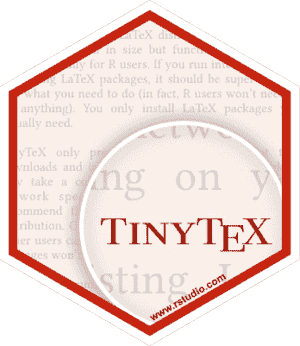 The motivation behind TinyTeX was from two common problems in installing and maintaining LaTeX distributions:

I believe these problems can be solved by TinyTeX, a custom LaTeX distribution based on TeX Live that is small in size but still functions well in most cases. Even if you run into the problem of missing LaTeX packages, it should be super clear to you what you need to do. In fact, if you are an R Markdown user, there is nothing you need to do, because missing packages will just be installed automatically. You may not even know the existence of LaTeX at all since it should rarely bother you.

This repo contains the installation scripts of TinyTeX (under the tools directory) and the R companion package tinytex. Please see the full documentation at https://yihui.org/tinytex/. Obviously I hope it is not too long.

A lightweight, cross-platform, portable, and easy-to-maintain LaTeX distribution based on TeX Live