Install it from the Chrome Web Store. 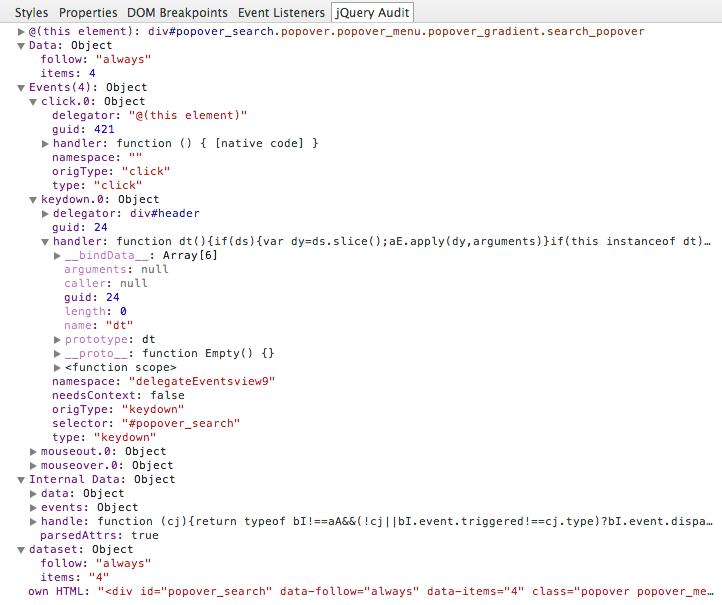 Requirements: jQuery Audit does a typeof window.jQuery === 'function' whenever a node is selected. If it can't find a jQuery function in the global scope, the sidebar will display Error: "@(window.jQuery is missing)".

Tip: Text wrapped in @(...) are "messages" from jQuery Audit. This was the compromise made to get live objects in the sidebar and be able to show informative messages.

Often event handlers are bound functions. In these cases, the function under Events → event_name → handler is the binder function and not the bindee. Depending on the binder used, the bindee function is usually near by.

_.bind from Underscore and native Function.prototype.bind

Yes, if the <iframe> has a jQuery function (regardless of the parent having jQuery or not) and it's not restricted by the same-origin policy.

Run jQueryAudit() in the console. When you close the developer tools the two comment nodes are removed and the jQueryAudit object is removed.

The content of a SidebarPane can be an HTML page, a JSON object, or "the result of an expression". An HTML page, nor a JSON object, have the ability to display "live" objects. The reason for making this extension was so that I could find a delegated event and be able to use "Show Function Definition" on the handler. For that effect, the contents of the sidebar is actually "the result of an expression" with a lot of trickery to make it look not-so-ugly. So, to differentiate between actual object data and informational messages I went with @(...) so it wouldn't be easily confused with string data.

I am a lawyer. Yes, really. Went to law school, passed the bar, and I'm a fully admitted member of the New York State Bar Association. So, yeah, that's why Audit came to mind when I was thinking of a name.

Disclaimer: I am not related to the jQuery project.