This package provides ready-to-use power plant data for the European power system. Starting from openly available power plant datasets, the package cleans, standardizes and merges the input data to create a new combining dataset, which includes all the important information. The package allows to easily update the combined data as soon as new input datasets are released. 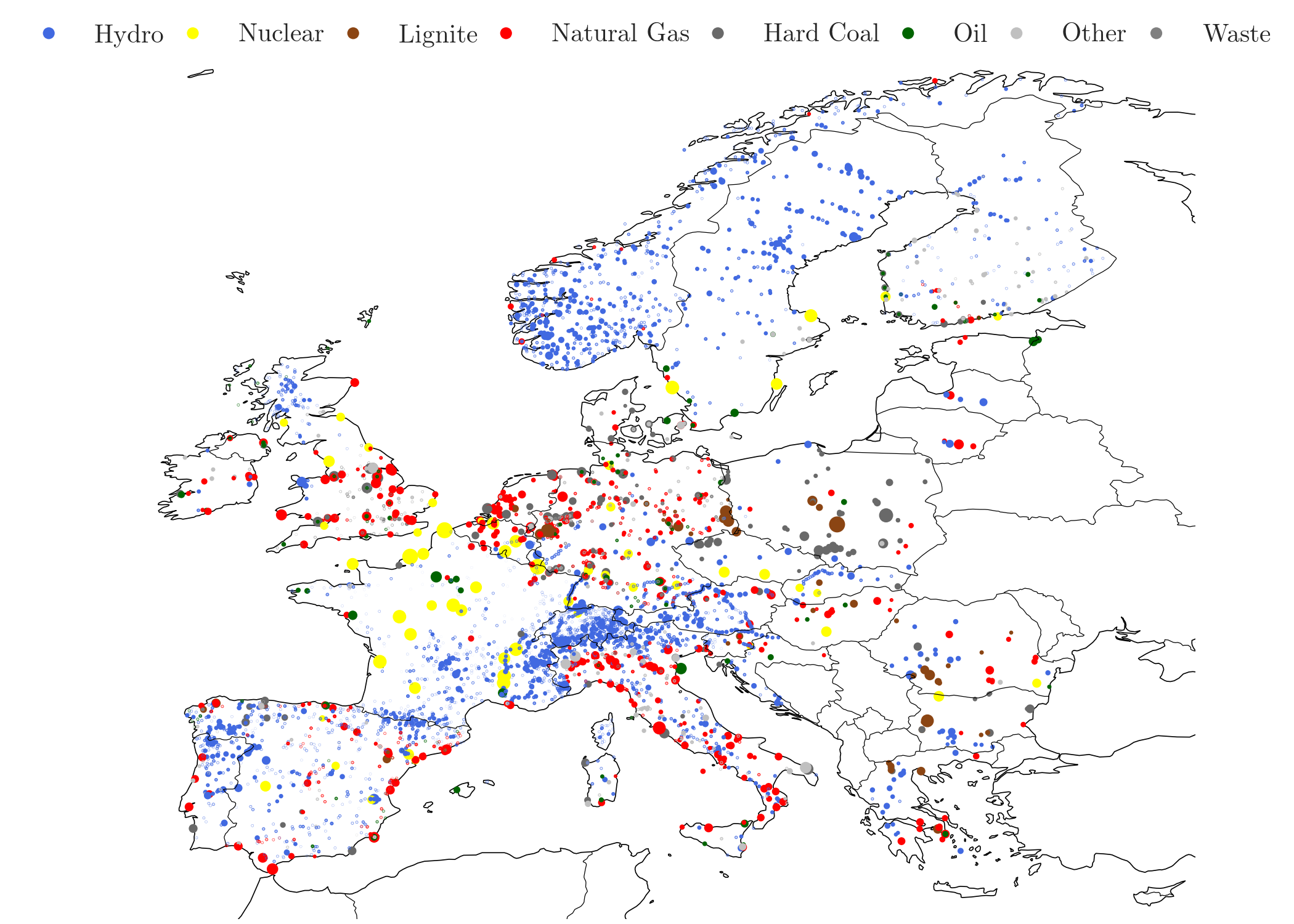 powerplantmatching was initially developed by the Renewable Energy Group at FIAS to build power plant data inputs to PyPSA-based models for carrying out simulations for the CoNDyNet project, financed by the German Federal Ministry for Education and Research (BMBF) as part of the Stromnetze Research Initiative.

What it can do

which will parse and store the actual dataset of powerplants of this repository. Setting from_url=False (default) will load all the necessary data files and combine them. Note that this might take some minutes.

The resulting dataset compared with the capacity statistics provided by the ENTSOE SO&AF:

The dataset combines the data of all the data sources listed in Data-Sources and provides the following information:

Where is the data stored?

All data files of the package will be stored in the folder given by pm.core.package_config['data_dir']

Make your own configuration

You have the option to easily manipulate the resulting data modifying the global configuration. Just save the config.yaml file as ~/.powerplantmatching_config.yaml manually or for linux users

and change the .powerplantmaching_config.yaml file according to your wishes. Thereby you can

Not available but supported sources:

The merged dataset is available in two versions: The bigger dataset, obtained by

links the entries of the matched power plants and lists all the related properties given by the different data-sources. The smaller, reduced dataset, given by

claims only the value of the most reliable data source being matched in the individual power plant data entry. The considered reliability scores are:

Let's say you have a new dataset "FOO.csv" which you want to combine with the other data bases. Follow these steps to properly integrate it. Please, before starting, make sure that you've installed powerplantmatching from your downloaded local repository (link).

Whereas single databases as the CARMA, GEO or the OPSD database provide non standardized and incomplete information, the datasets can complement each other and improve their reliability. In a first step, powerplantmatching converts all powerplant dataset into a standardized format with a defined set of columns and values. The second part consists of aggregating power plant blocks together into units. Since some of the datasources provide their powerplant records on unit level, without detailed information about lower-level blocks, comparing with other sources is only possible on unit level. In the third and name-giving step the tool combines (or matches)different, standardized and aggregated input sources keeping only powerplants units which appear in more than one source. The matched data afterwards is complemented by data entries of reliable sources which have not matched.

The aggregation and matching process heavily relies on DUKE, a java application specialized for deduplicating and linking data. It provides many built-in comparators such as numerical, string or geoposition comparators. The engine does a detailed comparison for each single argument (power plant name, fuel-type etc.) using adjusted comparators and weights. From the individual scores for each column it computes a compound score for the likeliness that the two powerplant records refer to the same powerplant. If the score exceeds a given threshold, the two records of the power plant are linked and merged into one data set.

where Dataset 2 has the higher reliability score. Apparently entries 0, 3 and 5 of Dataset 1 relate to the same power plants as the entries 0,1 and 2 of Dataset 2. The toolset detects those similarities and combines them into the following set, but prioritising the values of Dataset 2:

If you want to cite powerplantmatching, use the following paper

and/or the current release stored on Zenodo with a release-specific DOI:

powerplantmatching is released as free software under the GPLv3, see LICENSE for further information.