Note: Make sure you read the Overview section first to get a sense for some of the high-level principles.

This approach borrows heavily from the designs of Roslyn and TypeScript. However, it needs to be adapted because PHP doesn't offer the same runtime characteristics as .NET and JS.

The syntax tree is produced via a two step process:

Under the covers, the lexer is actually driven by the parser to reduce potential memory consumption and make it easier to perform lookaheads when building up the parse tree.

The lexer produces tokens out PHP, based on the following lexical grammar:

Initially, we tried handspinning the lexer, rather than using PHP's built-in token_get_all, because that approach would provide the most flexibility to use our own lightweight token representation (see below) from the beginning, rather than requiring a conversion. This initial implementation is available in src/Lexer.php, but has been deprecated in favor of src/PhpTokenizer.php.

Ultimately, the biggest challenge with the initial approach was performance (especially with Unicode representations) - we found that PHP doesn't provide an efficient way to extract character codes without multiple conversions after the initial file-read.

Tokens hold onto the following information:

In order to be as efficient as possible, we do not store full content in memory. Instead, each token is uniquely defined by four integers, and we take advantage of helper functions to extract further information.

In order to ensure that the parser evolves in a healthy manner over time, we define and continuously test the set of invariants defined below:

At this point in time, the Representation has not yet diverged from the Model. Tokens are currently represented as a Token object, with four properties - $kind, $fullStart, $start, and $length. However, objects (and arrays, and ...) are super expensive in PHP (see experiments/php7-types.txt). WordPress (11MB source) has around ~1 million tokens (more if you do no conversion from token_get_all, so it gets really expensive, really fast with an object representation. Ultimately, we need a way to store these four properties in a performant and memory-efficient manner.

We've explored a number of different options at this point.

It has not yet been implemented, and we're very much open to other ideas, but at the moment we're currently leaning towards bitwise operators. So now the question is "what encoding?" - note that we can always drop the Start property, and recompute, but we would prefer not to throw away that information if we can help it.

Each double/long property in PHP is 16 bytes total, though only 4-8 bytes (depending on 32-bit or 64-bit) are used for the value. We propose the following 64-bit representation (1 16-byte property on a 64-bit machine, two 12-byte properties on a 32-bit machine):

TokenKind and FullStart remain unchanged, so we won't dive into that, but the second pair needs some explanation. Instead of storing Start and Length properties, we will store TriviaLength (FullStart - Start) and TokenLength (Length - TriviaLength). Because we don't know which of the two will be longer (TriviaLength or TokenLength), we won't know how many bytes to allocate to each until we tokenize the stream. Therefore the bits allocated to LengthEncoding specify the bitshift value.

In the edge cases where we cannot store both, and we can recompute the value. Note that this extra complexity does not preclude us from presenting a more reasonable API for consumers of the API because we can simply override the property getters / setters on Node.

The parser reads in Tokens provided by the lexer to produce the resulting Syntax Tree. The parser uses a combination of top-down and bottom-up parsing. In particular, most constructs are parsed in a top-down fashion, which keeps the code simple and readable/maintainable (by humans ) over time. The one exception to this is expressions, which are parsed bottom-up. We also hold onto our current ParseContext, which lets us know, for instance, whether we are parsing ClassMembers, or TraitMembers, or something else; holding onto this ParseContext enables us to provide better error handling (described below).

For instance, let's take the simple example of an if-statement. We know to start parsing the if-statement because we'll see an if keyword token. We also know from the PHP grammar, that an if-statement can be defined as follows:

The resultant parsing logic will look something like this. Notice that we anticipate the next token or set of tokens based on the our current context. This is top-down parsing.

Expressions (produced by parseExpression), on the other hand, are parsed bottom-up. That is, rather than attempting to anticipate the next token, we read one token at a time, and construct a resulting tree based on operator precedence properties. See the parseBinaryExpression in src/Parser.php for full information.

See the Error-handling section below for more information on how ParseContext is used.

Nodes hold onto the following information:

Below, we define a set of invariants. This set of invariants provides a consistent foundation that makes it easier to confidently reason about the tree as we continue to build up our understanding.

For instance, the following properties hold true about every Node (N) and Token (T).

Let's say we run the following through parseIf

This above should generate the IfNode successfully. But let's say we run the following through, which is missing a close parenthesis token.

In this case, eat(")") will generate a MissingToken because the grammar expects a token to be there, but it does not exist.

In this case, the foo function block is not closed. A MissingToken will be similarly generated, but the logic will be a little different, in order to provide a gracefully degrading experience. In particular, the tree that we expect here looks something like this: 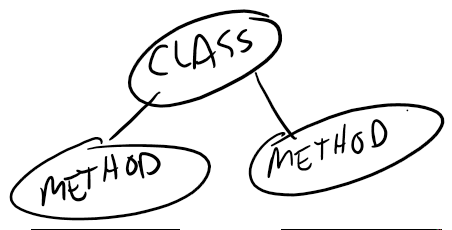 This is achieved by continually keeping track of the current ParseContext. That is to say, every time we venture into a child, that child is aware of its parent. Whenever the child gets to a token that they themselves don't know how to handle (e.g. a MethodNode doesn't know what public means), they ask their parent if they know how to handle it, and continue walking up the tree. If we've walked the entire spine, and every node is similarly confused, a SkippedToken will be generated.

In this case, however, a SkippedToken is not generated because ClassNode will know what public means. Instead, the method will say "okay, I'm done", generate a MissingToken, and public will be subsequently handled by the ClassNode.

Building on Example 2... in the following case, no one knows how to handle an ampersand, and so this token will become a SkippedToken

There are also some instances, where the aforementioned error handling wouldn't be appropriate, and special-casing based on certain heuristics, such as whitespace, would be required.

In this case, the user likely intended the type of $b to be MyClass. However, because under normal circumstances, parsers will ignore whitespace, the example above would produce the following tree, which implies that the $b assignment never happens.

In our design, however, because every Token includes preceding whitespace trivia, our parser would be able to use whitespace as a heuristic to infer the user's likely intentions. So rather than handling the error by generating a skipped = token, we could instead generate a missing token for the right hand side of the RelationalExpressionNode.

Note that for this error case, it is more of an art than a science. That is to say, we would add special casing for anticipated scenarios, rather than construct some general-purpose rule.

For large files, it can be expensive to reparse the tree on every edit. Instead, we save time by reusing nodes from the old AST.

Rather than reparsing the entire token stream, we reparse only the portion corresponding to the edit range. Such "invalidated" nodes include the directly-intersecting node, as well as (by definition) its parents. 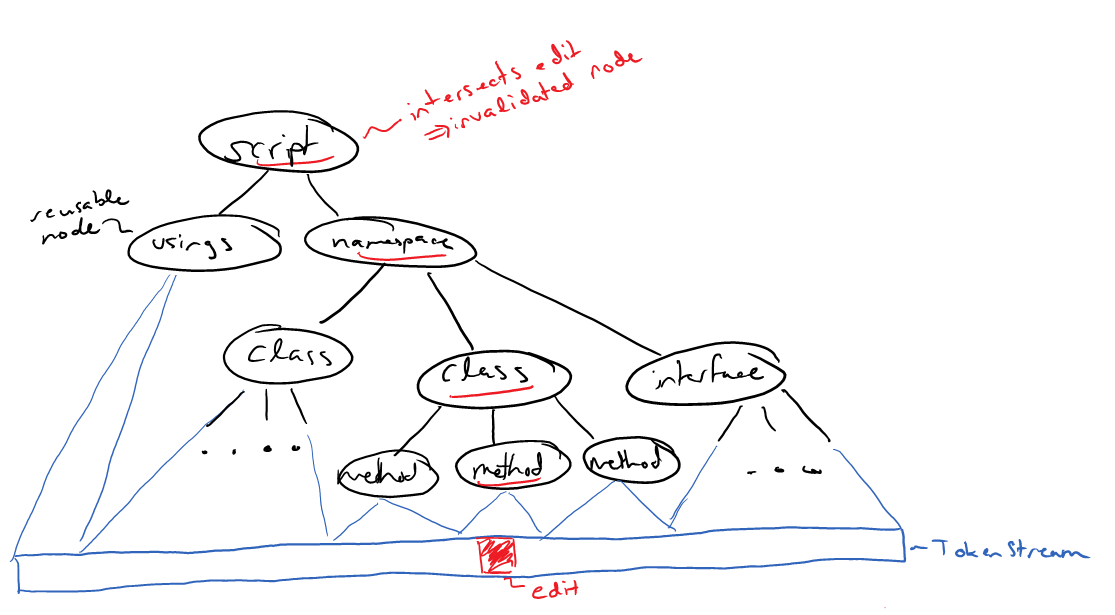 In order to minimize the impact of edge cases, we avoid context-specific conditions in the parser. For instance, let us apply the following transformation (making an edit that turns a compound statement into an class):

In addition to simply avoiding context-specific conditions where possible, we minimize the number of edge cases by limiting the granularity of node-reuse. In the case of this parser, we believe a reasonable balance is to limit granularity to a list ParseContext.

We ensure correctness in several ways: