Liquid Prompt gives you a nicely displayed prompt with useful information when you need it. It shows you what you need when you need it. You will notice what changes when it changes, saving time and frustration. You can even use it with your favorite shell – Bash or zsh. 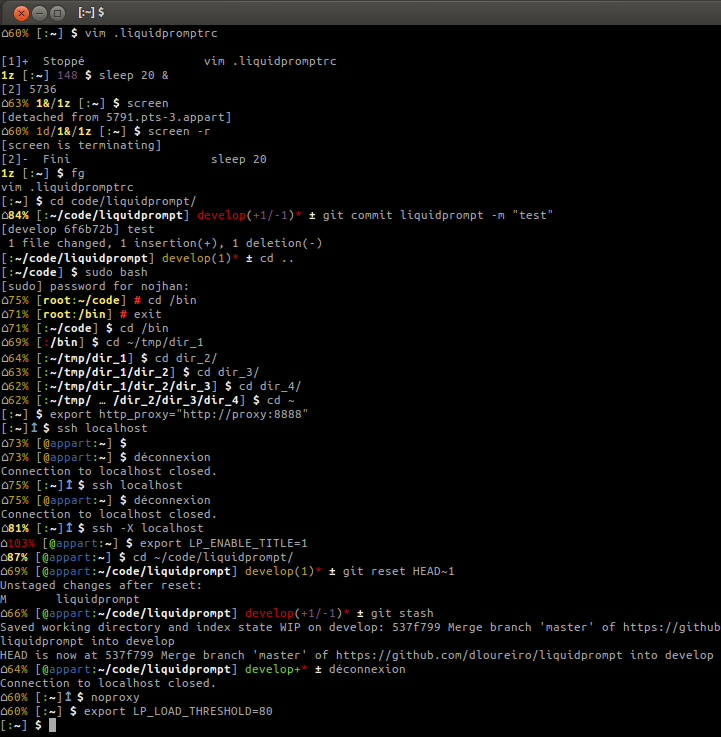 If there is nothing special about the current context, the appearance of Liquid Prompt is similar to that of a default prompt:

If you are running a background command and are also in the "myb" branch of a Git repository on a server:

When Liquid Prompt is displaying everything (a rare event!), it may look like this:

Here is an overview of what Liquid Prompt is capable of displaying:

You can temporarily deactivate Liquid Prompt and revert to your previous prompt by typing prompt_off. Use prompt_on to bring it back. You can disable all prompts and simply use a single mark sign ($ for user and # for root) by using the prompt_OFF command.

Installation is simple. The basic dependencies are standard Unix utilities/commands. If you experience some problems during the installation, please check that they are met; see the dependencies section for what you need specifically.

Next up is the configuration; you can skip this step if you like the defaults:

You can also copy the file to ~/.liquidpromptrc. Use your favorite text editor to change the defaults. The liquidpromptrc file is richly commented and easy to set your own defaults. You can even theme Liquid Prompt and use a custom PS1 prompt. This is explained in the sections below.

Check in your .bashrc that the PROMPT_COMMAND variable is not set, or else the prompt will not be available. If you must set it or use a add-on that sets it, make sure to set PROMPT_COMMAND before you source Liquid Prompt to avoid history and timing issues. Do not export PROMPT_COMMAND.

To install via antigen, simply add the following line in your .zshrc after activating antigen:

Apart from obvious ones, some features depend on specific commands. If you do not install them, the corresponding feature will not be available, but no error will be displayed.

For other features, the script uses commands that should be available on a large variety of Unix systems: tput, grep, awk, sed, ps, and who.

You can configure some variables in the ~/.config/liquidpromptrc file:

You can also force some features to be disabled, to save some time in the prompt-building process:

Note that if required commands are not installed, enabling the corresponding feature will have no effect. Also, all the LP_ENABLE_… variables override the templates; i.e. if you use $LP_BATT in your template and you set LP_ENABLE_BATT=0 in your configuration file, your prompt will not have any battery information.

If you are using Bash and want to use the PROMPT_DIRTRIM built-in functionality to shorten but still want to have Liquid Prompt calculating the number of directories to keep in the path, precise a value for PROMPT_DIRTRIM before sourcing Liquid Prompt and it will override this value with one fitting the width of your terminal.

You may face performances decrease when using VCS located in remote directories. To avoid this, you can set the LP_DISABLED_VCS_PATH variable to a list of absolute colon-separated paths where VCS-related features should be disabled.

You can prefix the LP_PS1 variable with anything you want using LP_PS1_PREFIX. The following example activate a custom window's title:

To postfix the prompt, use the LP_PS1_POSTFIX variable. For example, to add a newline and a single character:

Note: the prompt_tag function is a convenient way to add a prefix. You can use it to add a keyword to each of your different terminals:

You can sort what you want to see by sourcing your favorite template file (*.ps1) in the configuration file.

You can start from the liquid.ps1 file, which show the default settings. To use your own configuration, just set LP_PS1_FILE to your own file path in your ~/.liquidpromptrc and you're done.

Those scripts basically export the LP_PS1 variable, by appending features and theme colors.

For example, if you just want to have a prompt displaying the user and the host, with a normal full path in blue and Git support only:

Note that you need to properly escape dollar signs in a string that will be interpreted by Bash at each prompt.

To erase your new formatting, just bind LP_PS1 to a null string:

You can change the colors and special characters of some parts of Liquid Prompt by sourcing your favorite theme file (*.theme) in the configuration file. See liquid.theme for an example of the default Liquid Prompt theme.

You can directly use them in your configuration files to change some foreground color in your own prompt, for example, to set the path segment as a bold and blue over the default background of your terminal: LP_COLOR_PATH="${BOLD_BLUE]}".

Set the variable to a null string ("") if you do not want color.