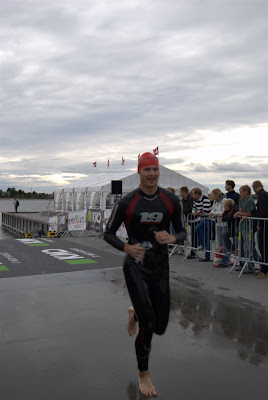 Last year I had my debut as triathlete – I wrote about it here: Blogpost last-year

This year I did that same race again. The hardcore numbers:

All in all  15minutes faster than last year, and still great fun. The major difference is that I have been practicing since last year. Lots and lots of swim, a new bike and a member ship of a triathlon club.

This year they changed bike ride to not include two loops which involved some cobblestones. Otherwise still great fun!

The Swim: This year I had a wet suit! The wind was cold and the water not very warm, so I was very happy to snuggle in my rented nineteen pipeline suit! I have been practicing my crawl technique pretty much since this time last year, so this year it was a breeze to actually do the front crawl all 400m’ers. Except for the part were I got confused and headed for the wrong buoy in the beginning I was plowing through the fields of breast-stroke-swimmers and ran for my bike. (I did not see any backstrokers this year :D)

The Bike: Very uneventful ride. I got a giant defy 1 bike this april and I have mounted aero-bars so it was quite another experience this time around. Nobody to draft from and overtaking all the way! Great fun

The run: Hard as all always but I felt stronger and was faster this year, not quite as lonely a run this year either. I believe that triathlon has gotten quite a hold of the danish population!

Great event. My main take-away was to think more about the layout of the transition area. I placed my bike in such a position that I had to run waaaaay to long in my biking shoes (got no triathlon-biking-shoes so I wield the shoes right after the swim and tun out of T1 in them)