The Internet of Things Agent for LoRaWAN protocol enables data and commands to be exchanged between IoT devices and the NGSI interface of a context broker using the LoRaWAN protocol.

It is based on the IoT Agent Node.js Library. Further general information about the FIWARE IoT Agents framework, its architecture and the common interaction model can be found in the library's GitHub repository.

This project is part of FIWARE. For more information check the FIWARE Catalogue entry for the IoT Agents.

As explained in What is LoRaWAN™, the proposed Network Architecture for a LoRaWAN based system relies on a mesh network architecture composed of End nodes, Concentrators, Network Servers and Application Servers. This IoTA is fully compliant with this architecture, providing interoperability between FIWARE NGSI Context Brokers and LoRaWAN devices. 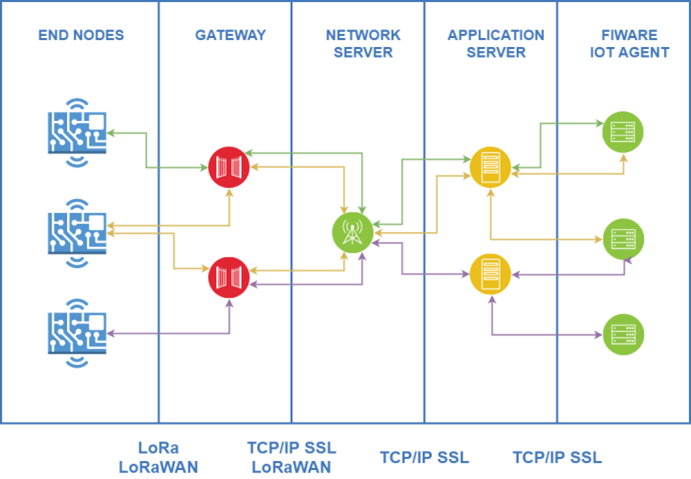 Information about how to install the LoRaWAN IoT Agent can be found at the corresponding section of the Installation & Administration Guide.

Information about how to use the IoT Agent can be found in the User & Programmers Manual.

Apiary reference for the Configuration API can be found here. More information about IoT Agents and their APIs can be found in the IoT Agent Library documentation.

The roadmap of this FIWARE GE is described here

This project is part of FIWARE and has been rated as follows:

The following third-party library is used under license:

Are there any legal issues with AGPL 3.0? Is it safe for me to use?

There is absolutely no problem in using a product licensed under AGPL 3.0. Issues with GPL (or AGPL) licenses are mostly related with the fact that different people assign different interpretations on the meaning of the term “derivate work” used in these licenses. Due to this, some people believe that there is a risk in just using software under GPL or AGPL licenses (even without modifying it).

For the avoidance of doubt, the owners of this software licensed under an AGPL-3.0 license wish to make a clarifying public statement as follows:

Please note that software derived as a result of modifying the source code of this software in order to fix a bug or incorporate enhancements is considered a derivative work of the product. Software that merely uses or aggregates (i.e. links to) an otherwise unmodified version of existing software is not considered a derivative work, and therefore it does not need to be released as under the same license, or even released as open source.