A .NET Tracker to create music for WYZPlayer.

WYZTracker is a tool developed by Augusto Ruiz, from Retroworks, that can be used to compose music for WYZ's Player.

A first look at the application

This is the window that will appear when you first run the application: 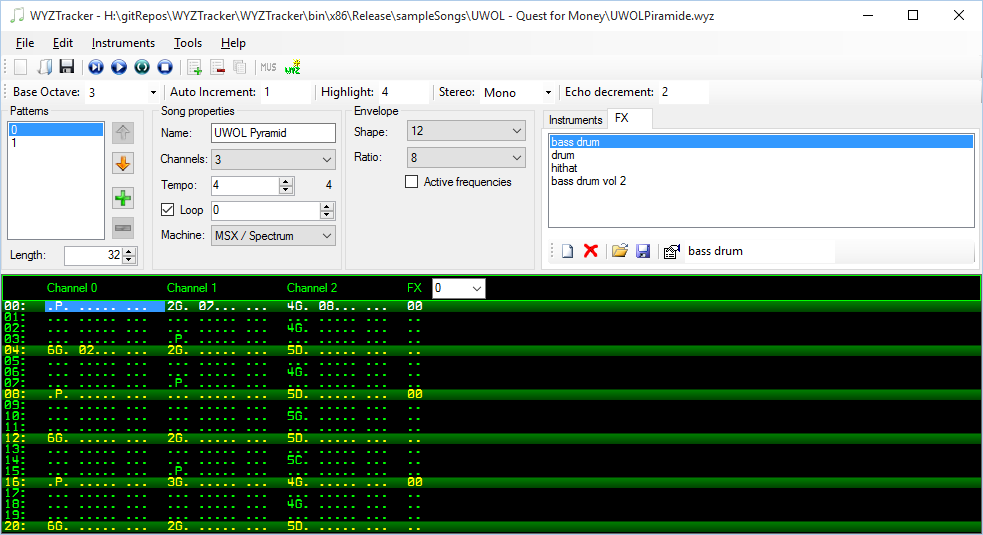 You can see at the top the Menu Bar, then the Tool Bar, and below you can see from left to right:

I didn't see that the first time!

Well, that's true. Actually, the first thing you see when the application starts for the first time is something like this:

This screen is pretty obvious, it will check whether .wyz files are associated with WYZTracker, and if not (which will probably will be the case the first time you run the application), will kindly ask you if you want to associate the .wyz file extension to WYZTracker, so that double clicking any .wyz file will open a new instance of the tracker with the specified file.

Now, let's see what we can do with the menu bar: 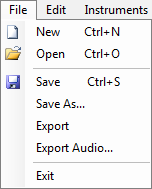 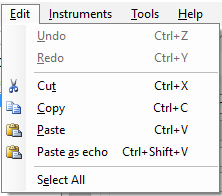 The tool bar has some convenient buttons in it that will allow you to do the following:

There are also some other controls in the Tool Bar:

By the way, all buttons have a tooltip that will be shown if you let your mouse for a while over the button.

The Pattern Order Editor will let you sort the song patterns and move them around in order to create your song structure. Also is the place where you can create a new pattern, and specify how long the current pattern will be. The current pattern that is being edited is selected in this editor too.

Here is what you can do with this editor:

The song properties editor will let you set the song general properties, such as the song title, tempo, number of channels...

The data you can input here is:

The envelope settings editor is used to set the current parameters that will be used when adding notes that are going to be played using the Sawtooth instrument.

The settings map directly to the parameters the AY uses to control the envelopes, so I highly recommend you to play with them and see how they sound combined. You can do this with a new song. Select the Sawtooth instrument in the instrument selector, and start pressing keys from the virtual piano. Change some settings and press some more... And please, try the Active frequencies setting ;)

This is a list of the instruments defined for the current song. You can change the selected instrument, which is the one that will be used when pressing keys of the Virtual Piano. Also, right clicking an instrument will allow you to export that instrument. In order to export all of them at once, use the Menu Bar, or the export button in the tool bar below the instrument selector. 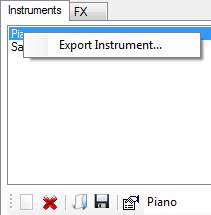 Double clicking an instrument will show you the Instrument Editor.

You can change the currently selected Instrument quickly by pressing F6 and/or F7.

This is a list of effects defined for the current song. Right clicking an effect will allow you to export the current effect. In order to export all of them at once, use the Menu Bar, or the export button in the tool bar below the FX selector. 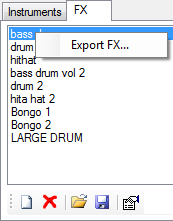 Double clicking an effect will show the Effect Editor.

There is a toolbar below the selector that will allow you to create a new effect, delete the selected one, import effects, export effects, show the effect editor, and display the current effect name.

So, finally! The pattern editor is where you fill the notes that will be played for the current pattern, with which instruments, and for how long... In order to do so easily, you can use the Virtual Piano. Whenever you press a key of the virtual piano, it will add the corresponding note to the currently selected position in the pattern editor.

Working with the virtual piano

The virtual piano has two octaves. The lower octave starts with the key Z, which is a C note, and all keys in that keyboard row are the D, E, F, G notes and so on. The next row of keys is where the sharp notes lie, so there are some keys that don't have an actual note. For example, C# is the S key. The actual value of the octave is the one selected in the "Base Octave" that appears in the Tool Bar.

If the currently selected position is inside the FX channel, then the virtual piano works differently. It uses the keys 1,2,3,... for the FX, so you don't have to change the FX by selecting it when creating drum sequences.

You can use a MIDI Piano. Be sure to plug it in BEFORE you start WYZTracker.

In the pattern editor you can select ranges by selecting and dragging with the left mouse button. That way you can cut, copy or apply modifiers to all notes in the selected range.

The pattern editor has a contextual menu:

All the items in this contextual menu will work on the selected range of notes. It will allow you to transpose notes, change the octave, or set the instrument to the one you specify.

This is the place where you can edit, add, or remove instruments for the current song. It looks like this: 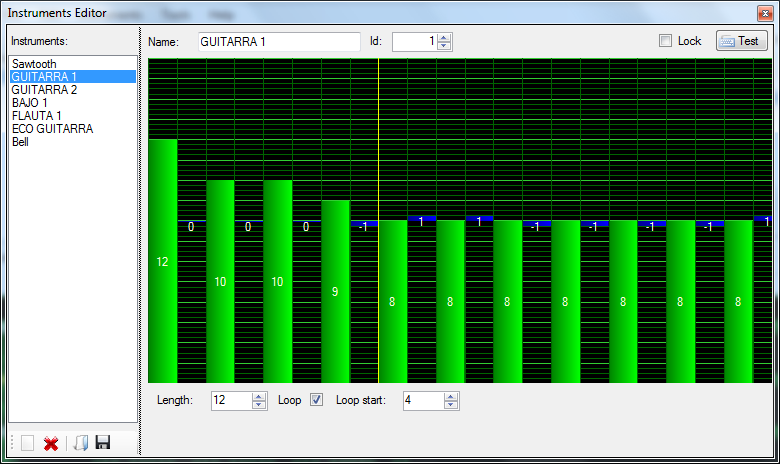 You can export a single instrument by right-clicking on the instrument and selecting "Export Instrument...".

An instrument is defined by:

Setting the volumes and modifiers

You can set the volumes by left clicking on the odd columns of the editor, and dragging. The checkbox "Lock" can be used to restrict the change of the current value to the column the mouse was over when the drag started.

The modifiers can be:

Click the Test button, and it will remain pressed. Now, you can test the instrument by using the Keyboard the same way you would use it to input notes in the Pattern Editor. Clicking the Test button again will release the button, and the Test will be finished. 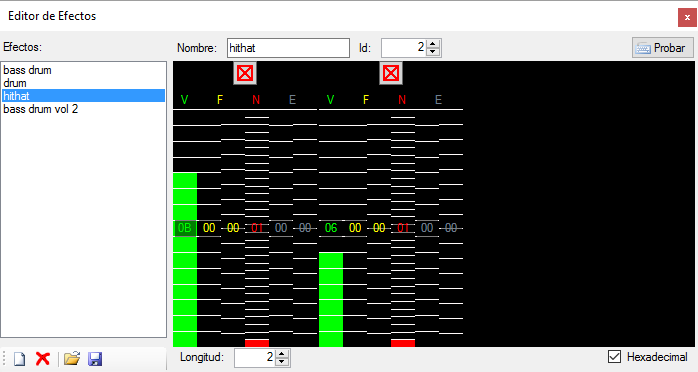 You can export a single effect by right-clicking on the effect and selecting "Export Effect...".

An effect is defined by:

You can set the levels by left clicking on the editor, and dragging. The checkbox "Lock" can be used to restrict the change of the current value to the column the mouse was over when the drag started. The levels are color coded:

Click the Test button, and it will remain pressed. Now, you can test the effect by using the Keyboard the same way you would use it to input effects in the Pattern Editor. Clicking the Test button again will release the button, and the Test will be finished. 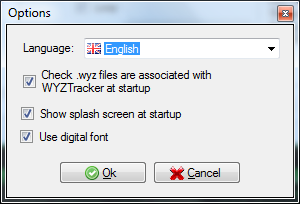 This is the screen where you can select:

This is the editor where notes frecuencies can be customized. You can select:

This editor will let you easily specify one channel of a pattern, with some composer visual aids. 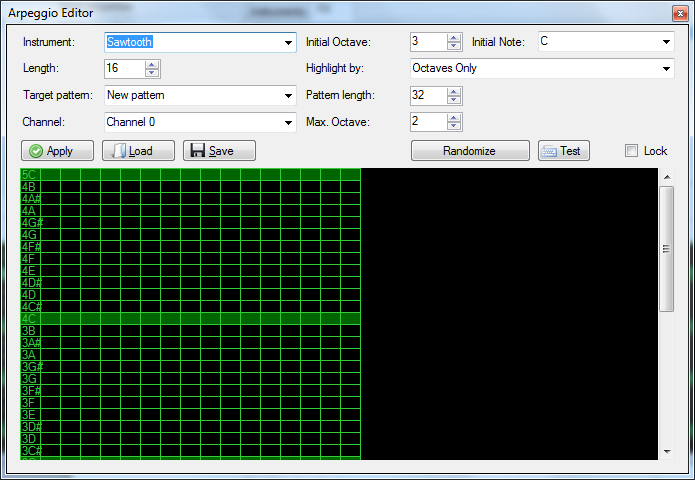 You can specify a set of parameters that control the root note and how many octaves you want to have available to create the arpeggio, and the target pattern and channel where the notes will be set.

On the lower part of the editor you can see a grid where you can set notes for the arpeggio. The notes are set by clicking with the left mouse button (and are shown in red). Clicking with the right mouse button, you will delete the note if there is a note in the current column, or insert a "stop playing" note (shown in orange).

The buttons available are:

For the FX editor:

A .NET Tracker to create music for WYZPlayer.