Biome-Shiny is a graphical interface for visualizing microbiome data, primarily based around the "phyloseq" and "microbiome" libraries, with the "shiny" library being used to develop the interface. It provides a user-friendly interface to generate and visualize community composition and diversity through interactive plots.

Biome-Shiny has some dependencies outside of R that need to be installed before downloading the package. In Ubuntu:

Biome-Shiny is an R package, and can installed, along with its dependencies using devtools.

All you need to do to launch the app is open R and type in the R console:

Then type in your browser of choice:

Biome-Shiny has a variety of visualizations and tables that can be used to subset and visualize a dataset.

Biome-Shiny makes use of phyloseq's .biom importing functions to upload data. It accepts a .biom file as input, and requires metadata (sample_data() in phyloseq format files).

to load the data.

Alternatively, you can use the sample data provided by microbiome for testing purposes, by clicking

Biome-Shiny has several functions for subsetting and filtering datasets.

Once done with filtering, tick

to apply changes, and untick to return the dataset to default settings.

In the "Top taxa" tab, the user can remove all but a number of taxa from the dataset, leaving only a small number of top taxa. To apply changes, the user must tick

The "Subset taxa" tab allows the user to remove all species or OTUs belonging to a certain taxa. The user must choose a taxonomic rank in the dropdown list, then untick all taxa that they wish to see removed. Once they're done, tick

Example of the taxa subsetting menu

The user can remove individual samples from the dataset in the "Remove samples" tab. Like the previous section, to remove samples just untick all samples that should be removed and tick

It's possible to subset the plot by a value of prevalence - the ratio of OTU/species presence in samples. For example, a prevalence of 0.5 will make it so that any species that doesn't appear in at least 50% of samples will be removed from the dataset. In the "Prevalence [0-1]:" box, input a number between 0 and 1. Inputting a value of 1 will likely cause an error, unless there is an OTU that's present in 100% of samples. 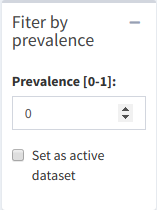 Displays a general summary of the entire dataset, based on the microbiome library's summarize_phyloseq() function. This includes smallest, largest and median reads, number of singletons, and whether the data is in compositional format or not.

A heatmap that compares abundance values for each OTU on each sample. Allows the user to view how abundant a given taxa is, generating abundance (absolute and relative) barplots which allow the samples to be sorted by metadata. 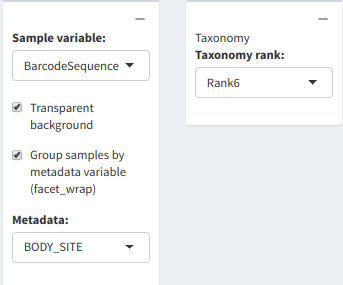 In the "Sample variable:" dropdown list, the user needs to pick the metadata variable which corresponds to the samples. If the uploaded dataset didn't have any metadata attached to it, the sample variable was automatically generated from the OTU table's sample headers.

, the user can divide the plot bars, based on the levels of a given metadata variable (e.g. splitting samples between two different nationalities). The metadata which will be used to divide the samples can be picked in the "Metadata:" dropdown list.

The "Taxonomy Rank:" dropdown colors the bars based on the chosen taxonomic rank.

Alpha diversity is the index that measures diversity within a sample.

Biome-Shiny displays several tables with diversity measures in the samples, such as an Evenness Table (measures how equal the OTU numbers are in each sample), Abundance Table (measures the number of each OTU in the table, whether as a simple count or in relation to the full number of species in the sample) and a table with assorted diversity measures (measure richness, among other things). 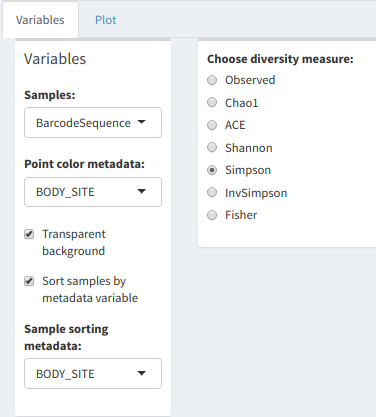 Finally, it's possible to group samples by a metadata sample in the same way as the Community Composition plots.

Beta diversity is an index that measures diversity between samples. Biome-Shiny measures Beta diversity by the samples' general composition. This is done by generating a distance matrix and representing it as a PCA plot, where each point corresponds to a sample.

The PERMANOVA test can be used to determine the importance of a sample variable in affecting the samples' composition. The test is applied over a user-input number of permutations, and with a dissimilarity index chosen by the user (default is "bray", though there are several more). 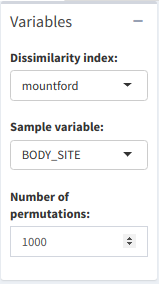 The test's results can be viewed in a table, where a P-value between 0 and 1 determines the importance of the analyzed variable in affecting differences between samples

Individual tables and plots can be saved, either by pressing

(for tables) or the

Alternatively, an HTML report can be downloaded by clicking

in the Results tab.