A Framework for Multi-Robot Motion Planning, Coordination and Control

This software implements an online coordination method for multiple robots. Its main features are:

The software includes a basic 2D robot simulation and a simple built-in motion planner (which depends on the OMPL library). A separate interface package is provided to enable the use of this software in conjunction with ROS and the navigation_oru stack to obtain a fully implemented stack for multi-robot coordination and motion planning.

The algorithm provided by this implementation is detailed in 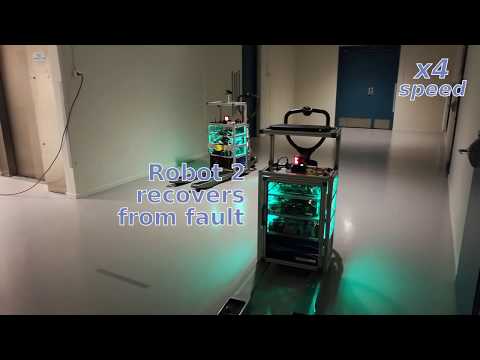 The approach makes very few assumptions on robot controllers, and can be used with any motion planning method for computing kinematically-feasible paths. Coordination is seen as a high-level control scheme for the entire fleet. Heuristics are used to update precedences of robots through critical sections while the fleet is in motion, and the dynamic feasibility of precedences is guaranteed via the inclusion of user-definable models of robot dynamics.

The approach is discussed in detail in the tutorial on Integrated Motion Planning, Coordination and Control for Fleets of Mobile Robots, given at the 2018 International Conference on Automated Planning and Scheduling (ICAPS) by F. Pecora and M. Mansouri. Slides and source code of the tutorial are available here.

To install, clone this repository and compile the source code with gradle (redistributable included):

A number of examples are provided. Issue the following command from the source code root directory for instructions on how to run the examples:

In the example TestTrajectoryEnvelopeCoordinatorThreeRobots, missions are continuously posted for three robots to reach locations along intersecting paths. The paths are stored in files provided in the paths directory. The poses of locations and pointers to relevant path files between locations are stored in the self-explanatory paths/test_poses_and_path_data.txt file.

Most examples use the BrowserVisualization. The state of the fleet can be viewed from a browser at http://localhost:8080. The image below shows this visualization for the TestTrajectoryEnvelopeCoordinatorThreeRobots example: An arrow between two robots indicates that the source robot will yield to the target robot. Priorities are computed based on a heuristic (which can be provided by the user) and a forward model of robot dynamics (which can also be provided, and is assumed to be conservative - see the ICAPS 2018 paper mentioned above). The specific poses at which robots yield are also updated online, based on the current positions of robots and the intersecting areas of their trajectory envelopes (critical sections). This makes it possible to achieve "following" behavior, that is, the yielding pose of a robot is updated online while the "leading" robot drives.

The a Swing-based GUI provided by class JTSDrawingPanelVisualization looks like this: This GUI allows to take screenshots in SVG, EPS and PDF formats by pressing the s, e and p keys, respectively (while focus is on the GUI window). Screenshots are saved in files named with a timestamp, e.g., 2017-08-13-11:13:17:528.svg. Note that saving PDF and EPS files is computationally demanding and will temporarily interrupt the rendering of robot movements; SVG screenshots are saved much quicker.

The RVizVisualization visualization publishes visualization markers that can be visualized in RViz. The class also provides the static method writeRVizConfigFile(int ... robotIDs) for writing an appropriate RViz confiuration file for a given set of robots. An example of the visualization is shown below. The visualization with least computational overhead is the RVizVisualization, and is recommended for fleets of many robots. The BrowserVisualization class serves an HTML page with a Javascript which communicates with the coordinator via websockets. Although rendering in this solution is less efficient than in RViz, the rendering occurs on the client platform (where the browser is running), so its computational overhead does not necessarily affect the coordination algorithm. The JTSDrawingPanelVisualization is rather slow and not recommended for fleets of more than a handful of robots, however it is practical (not requiring to start another process/program for visualization) and relatively well-tested.

More detailed information about execution is posted in the terminal and saved to log files. Log files can be inspected offline by running class coordination_oru.util.BrowseLogs, which opens a log browsing GUI. Each panel in the GUI shows the output of one of the class instances that ran in the previous execution of the test program. Several of these classes are instantiated in separate threads, and messages produced concurrently are highlighted when the caret position in one of the panels is updated by the user. The key-bindings Alt-<X> and Ctrl-Alt-<X> can be used to quickly select panel <X> in the top and bottom pane, respectively. A simple motion planner is provided for testing the coordination framework without the need for pre-computed path files. The planner can be used to obtain paths for robots with Reeds-Shepp kinematics (Dubin's car-like robots that can move both forwards and backwards), and is used in several of the included demos.

The provided motion planner depends on the Open Motion Planning Library (OMPL). The motion planner and its Java interface are purposefully kept very simple. It performs rather poorly in terms of the quality of paths it returns, and is not suited for anything beyond simple examples. Please consider developing a more performing and principled integration with your motion planning software of choice, as done in the coordination_oru_ros package.

Please install the OMPL library, which is available in the official Ubuntu repositories:

Then, compile and install the simplereedssheppcarplanner shared library as follows:

This will install libsimplereedssheppcarplanner.so in your /usr/local/lib directory. A simple JNA-based Java interface to the library is provided in package se.oru.coordination.coordination_oru.motionplanning. The Java class ReedsSheppCarPlanner in the same package can be instantiated and used to obtain motions for robots with Reeds-Shepp kinematics.

A simple example showing how to invoke the motion planner is provided by class TestReedsSheppCarPlanner in package se.oru.coordination.coordination_oru.motionplanning.tests.

Most of the coordination examples make use of the motion planner (see screenshot below). Issue command

for a list of all provided examples and instructions on how to run them (and/or see package se.oru.coordination.coordination_oru.tests). This project is supported by