This project is a work in progress. 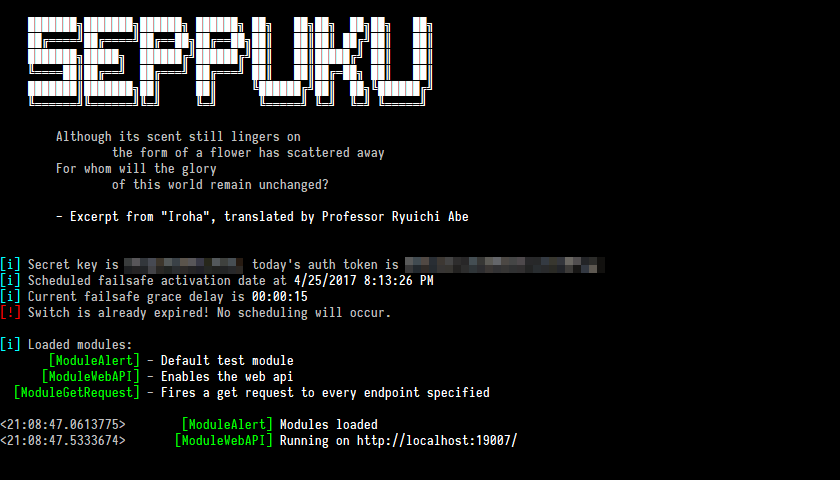 A dead man's switch (for other names, see alternative names) is a switch that is automatically operated if the human operator becomes incapacitated, such as through death, loss of consciousness, or being bodily removed from control. Originally applied to switches on a vehicle or machine, it has since come to be used to describe other intangible uses like in computer software. Wikipedia

Consists of a continous countdown timer, which requires constant resets to avoid triggering, akin to a deadman's switch used in a train. If the timer is allowed to countdown because the owner is not able to reset the timer, then it will trigger a list of actions in the form of "modules", which can be added to Seppuku to extend its functionality.

For example, you could create a module which wipes your harddrive when the switch triggers, or sends a message to everyone in your contacts.

Q: I'll be dead anyways, why would I care about what happens after I die?
A: I just write software, get your philosophy outta here

Q: How should I run this?
A: Rent a Linux box and run it with Mono as a daemon or something of that ilk.

On first execution, seppuku.xml will be generated. Look through it to see what you can modify. The default configuration properties are available at https://github.com/Netdex/Seppuku/blob/master/Seppuku/Config/Conf.cs#L30 (this link might not lead to the right code).

Each individual module also has it's own configuration, stored at /Configuration. Each module specifies its default configuration through the constructor.

Modules are MEF contract based. See Seppuku/Module/Internal/ModuleAlert.cs for an example. For non-internal modules, compile them as a .dll file and place them in a folder named Modules/ in the same directory as seppuku.exe.

Prints out a message to the console whenever an event occurs.

Seppuku also exposes a web API through ModuleWebAPI to query information about the deadman's switch, available at localhost:19007 by default (can be configured). All responses are returned in JSON. Look in the code for more details.

Sends GET requests to multiple configurable endpoints when the switch fails.