Lua Player Plus for 3DS 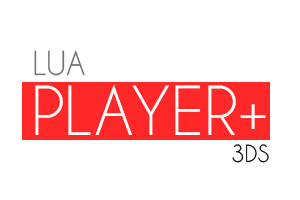 Lua Player Plus 3DS is the first lua interpreter made for Nintendo 3DS.

The interpreter currently runs under Lua 5.3.1. It has also a debug FTP server to correct your errors in runtime.

We offer an automated builder service for our nightly builds. Nightly builds are automatically updated every 4 hours by a server we own. To take advantage of this service, you should visit this page.

Here are some 3DS homebrews made using Lua Player Plus 3DS:

The repository will provide you a full set of all of the needed libraries. Take in mind that a lot of them are modified versions of the original ones so if you want to update them, take a look at this repository where you can find sourcecodes of every pre-builded library used in this repository. Also take in mind that libkhax includes also libSu sourcecode. Last but not least, please note that libjpeg.a file is a standard compilation of libjpeg-turbo.

Lua Player Plus for 3DS