This version adds MaxTile support, a system that removes all sprite tile limitations from SMW and allows up to 128 sprite tiles on the screen and fixes priority issues between sprites, such as the key and keyhole. 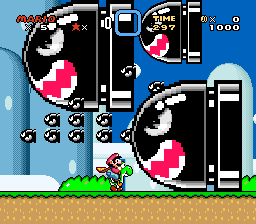 This version fixes one of the 'boxes' floating on the bonus game, being caused by an incompatibility with sprite memory 0x08 and the bonus game sprites.

In addition, for ROM hackers, it adds a mechanism for retrying DMA interrupted by HDMA on the LZ2/LZ3 decompressor and adds a few missing notes on the programming guide.

For game players, this release activates 22 sprites mode for most of the levels, unlocking the default sprite spawning limitations Nintendo imposed on the levels. That will make the game slight harder, but it will let enemies spawn enemies as maximum as the SA-1 Pack allows for!

For ROM hackers, this release adds DMA remap which frees channel 7 for custom HDMA and fixes a graphics uploading bug, adds a finish OAM hook, useful for custom sprites that uses a lot of OAM slots, fixes a bug involving bank switching and fixes an issue related to custom game over screens, in addition if the ROM is clean, it changes the sprite header to 0x08 on all compatible levels.

This version fixes some minor but important bugs.

This version still does not work with VWF Dialogues and requires to you change your sprite header index to 0x08 instead of 0x10 for the 22 sprites mode. However it has native support for the new Lunar Magic version.

This version does not work with the current VWF dialogues due of its new IRQ controller. It requires a small tweak to its code.

This version pretty much adds compatibility with real hardware, making it run (for now) with hacked SA-1 carts (with 128KB BW-RAM or more). Thanks a lot markfrizb for discovering, testing and helping me with the fixing process. Without him I'd never really know that the SA-1 Pack had real hardware issues.