a web application framework for python

Spyre is a Web Application Framework for providing a simple user interface for Python data projects.

Spyre runs on the minimalist python web framework, cherrypy, with jinja2 templating. Spyre is all about data and data visualization, so you'll also need pandas and matplotlib.

The Simplest of Examples

The SimpleApp class inherits server.App which includes a few methods that you can override to generate outputs. In this case we want our app to display HTML (just text for now) so we'll overide the getHTML method. This method should return a string.

This is a list of dictionaries, one dictionary for each input element. In our simple example above, there's only one input, of type "text". We give it a label and initial value with the keys "label" and "value". The value from this input will be used as an input parameter when generating the outputs (html in this case), so we need to also give it a key that we can reference in the getHTML method. "action_id" is an optional variable that equals id from either an output or a control element (we'll get to controls in the next example). When action_id is defined, a change in the input will result in either an update to the referenced output or a call to the functions connected to the referenced control.

An output's type can be "plot", "image", "table", "html", or "download". In addition to the type, we also need to provide a unique id (must start with a letter). If this output is suppose to get updated on execution of one of the controls specified in the list of controls, we need to also specify the control_id of that controller (which we'll see in the next example). All outputs get generated on page load by default. If we want an output not to load on the page load, we can also specify an "on_page_load" attribute and set it to False.

Controls are one mechanism by which a spyre app can update its outputs. A control's id can be referenced by either an input or an output. When an output references the control's id, executing the control updates that output. When an input references the controld's id (via the "action_id"), updating the input executes the control. The two control type options are "button" and "hidden". "button" will add a button to the left panel. No control is added to the left-panel for control_types "hidden" (this is useful for linking a single input action to multiple outputs).

Let's get back to our getHTML method. Notice that it takes a single argument: params. params is a dictionary containing:

With the exception of the input type "checkboxgroup", the value of each of the params elements is a string. The string returned by getHTML will be displayed in the right panel of our Spyre app.

To launch our app we just need to create an instance of our SimpleApp class and call the launch method. Assuming you name this file "simple_app_example.py" you can launch this app from the command line with:

If all goes smoothly your spyre app should look like this:

Let's look at another example to introduce controls, tabs, and a second output type, tables. Many apps will require multiple outputs. In these cases, it's often cleaner to put each output in a separte tab.

In the example below we'll show historical stock data in a line graph and a table, each in it's own tab. Since inputs can only have a single action_id (and we have two outputs), we'll need to introduce a button control in order to update both outputs.

There's a few things to point out here:

We're also overriding getData, a method which should fetch or generate the data that will go into the table. Just like getPlot, it takes a params argument which is a dictionary containing all of our input variables. getData should return a pandas DataFrame.

Launch the app just as you did in the previous example. The app now has two tabs. 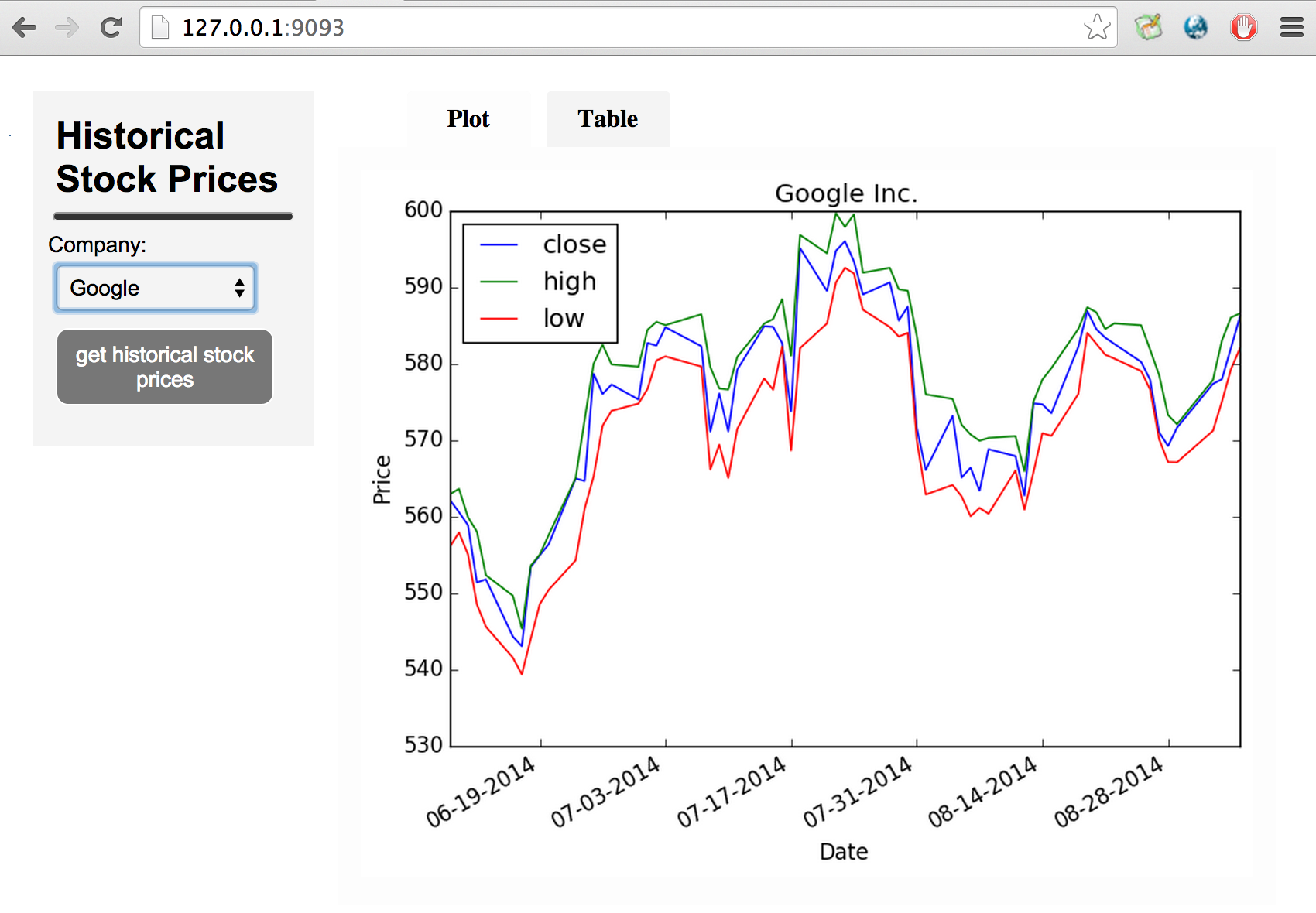 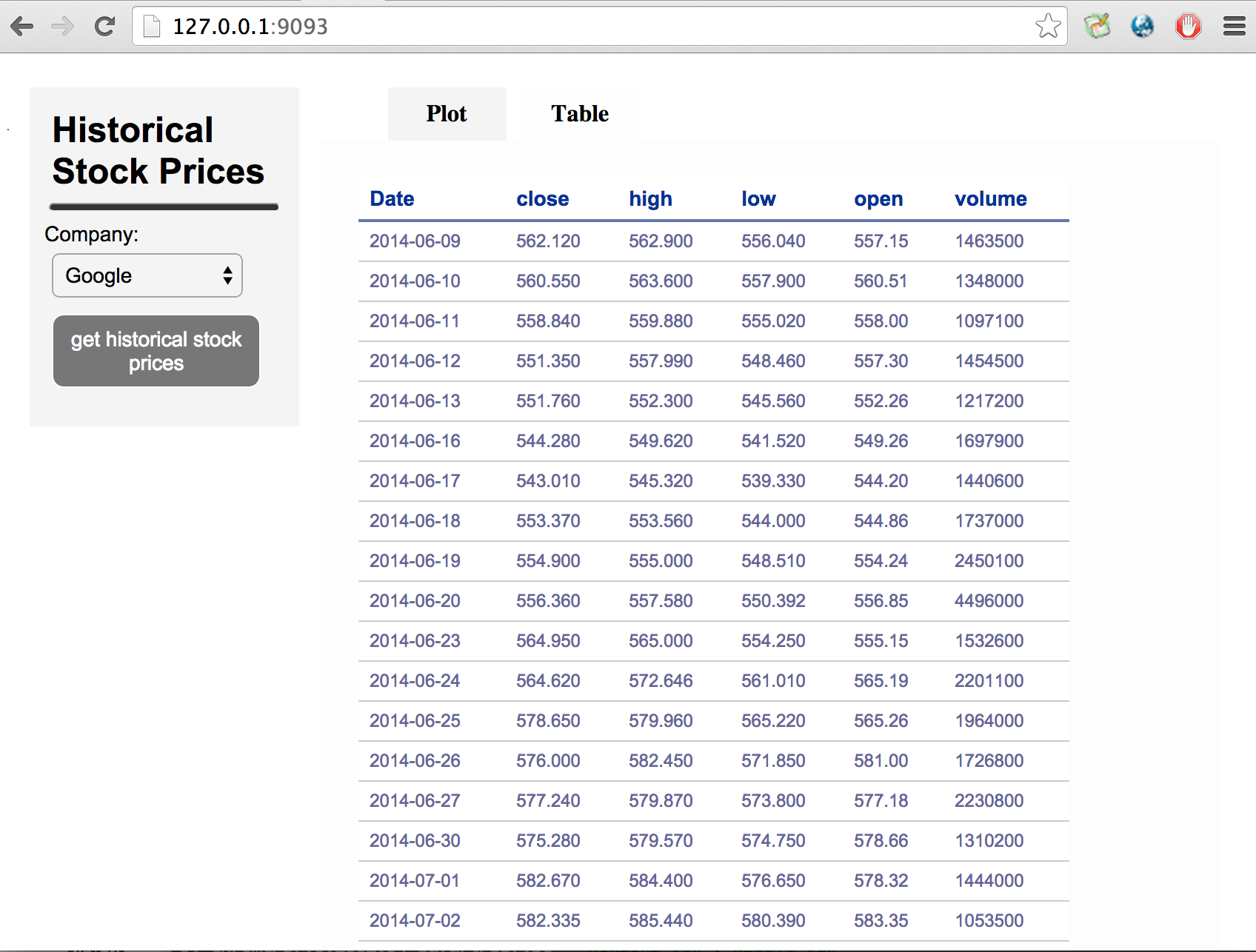 Much of the work that went into creating Spyre happened during hack weeks at Next Big Sound. If you're a talented engineer or data scientist looking for a great place to work, check out their about page for job openings!

a web application framework for python