Foundation Mobile is a plugin or addon , which adds some much-needed mobile-specific user interface elements to the excellent Zurb Foundation CSS framework.

We've tried several other mobile-web focused frameworks, but none of them accomplished what we needed in the way that we wanted. To us, a mobile web app should follow a few ideals:

See the bottom of this README to see how other frameworks and solutions stack up.

First step is to get your app going with Foundation.

Good. Now you can simply add the CSS files from Foundation Mobile to your project and start using the new CSS classes for mobile-only components. 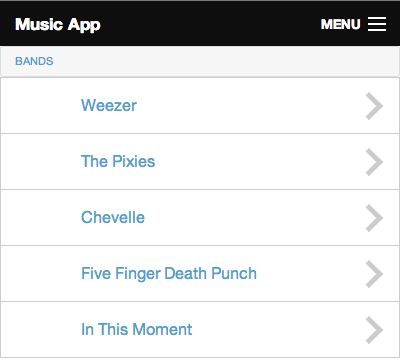 See the issue tracker for components planned for implementation. These include:

"But framework X already does this"

We tried a lot of frameworks before finally deciding to build foundation-mobile. Here's a highly abridged recap of our experiences.

It's a large library by itself, even larger when you factor it's hard dependence on jQuery, which itself is a large library. The final straw though was that it bakes in a lot of "magic" that's enabled by default, e.g. animations, hijacking all link clicks to fetch the page via ajax, parse the result, and append it to the body. These always caused weird bugs that necessitated ugly workarounds. Just give us some normal links please. I should note v1.4 aims to fix a lot of these issues when it's released, but it's still a large library that is sluggish on many devices. jQuery Mobile 1.4

We looked at building something just using Ratchet. The problem is, it's meant primarily for prototyping on Webkit-based, which means it doesn't work on Firefox, Opera, or other browsers. Their answer to such issues is usually "don't open your prototype on that browser". Thus, it's not really appropriate for actual mobile apps. Ratchet

It's a large library when you consider that it's desktop-first responsive, which means mobile devices have to parse a lot of CSS to render a page. It's also harder to implement custom designs on top of, since it takes a "kitchen sink" approach to UI. Bootstrap 3 will be mobile-first, which will make it a better option when it's released, but we still like Foundation better for its non-kitchen-sink approach. Bootstrap 3

It's a large MVC front-end framework. If we're doing this, we'd rather use Backbone for the MVC part. jqmobi

Framework combining Ratchet and Backbone. This is nice, but of course has the same downfall as Ratchet since that's what is used for the UI. Also, we'd like to option to start off the app without MVC and move to MVC when complexity necessitates. Junior

Kendo is a bit of a black box and requires per-developer licensing. Sencha violates our "HTML5 should be used for layout" ideal, as you build the whole app in JS and then their framework compiles the needed HTML5. KendoUI, Sencha Touch

When developing or updating a component, it's useful to update the version of Foundation Mobile used in the demo app in the docs. To do so, compile the foundation-mobile source into the docs app.

Compile the foundation-mobile CSS from the command line. Make sure you have the sass rubygem installed (you can do so with bundle install):

Compile the foundation-mobile JS from the command line. Make sure you have the sprockets rubygem installed (you can do so with bundle install):

Or, to compile stylesheets and javascripts all at once, run: