This is a largely defunct research project left online for posterity. If you're discovering this now, you should take a look at PushPin, a much more complete & robust implementation of this approach to software development.

Trellis is a Trello clone built as an Electron desktop application. We built Trellis to demo MPL, a distributed persistence library that allows developers to build collaborative applications that are realtime, offline, and network partition tolerant. 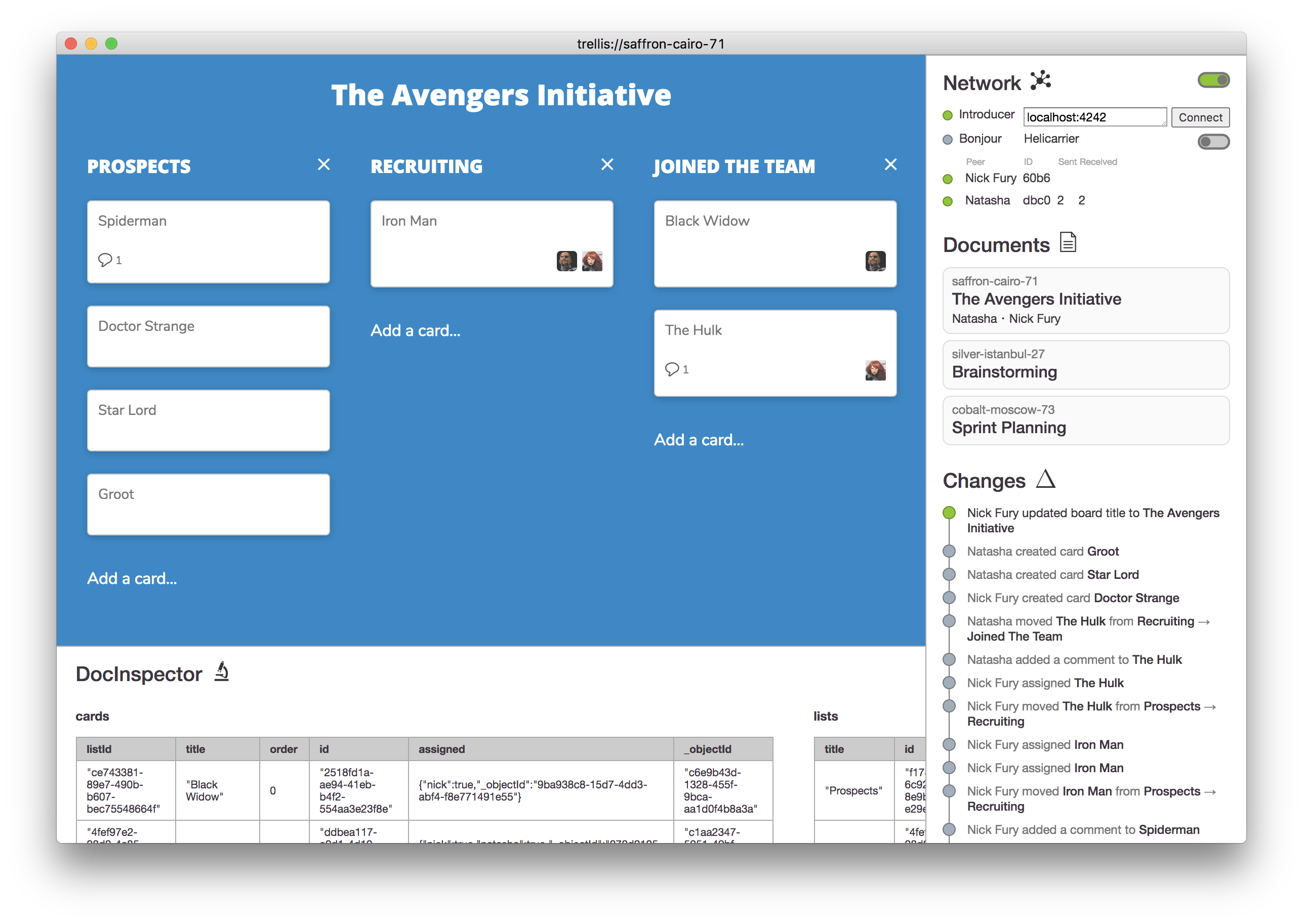 Our motivation to build Trellis was to create an application that would demonstrate the unique features of MPL. We chose to build a Trello clone as our demo application due to Trello's popularity as a web-based project management tool, its highly collaborative design, and its "dogfooding" usefulness so that we could use Trellis as we're building it.

Like most modern web applications, the original Trello relies on a stable Internet connection in order to function. With MPL, we can extend Trello's functionality to work offline, collaboratively with peers over a local network, and with synchronization so that peers coming back online can merge their changes with other peers using automatically merging data structures.

Trellis includes many of the basic features of Trello:

We designed Trellis as an experiment to test and demonstrate the functionality of MPL, a distributed persistence library built on top of Conflict-free Replicated Data Types (CRDTs). Our goal was to assess CRDTs to see whether these data structures, which can be automatically merged, also work well in practice. We expected there may be several issues with using CRDTs in practice, such as CRDTs becoming unperformant at even small scales, or that the developer experience might be too difficult for the typical app developer unfamiliar with CRDTs.

To our surprise, MPL was reasonably performant at our scale and we were able to design a developer interface that is intuitive, familiar to developers using modern frontend libraries, and does not require developers to understand or interface with CRDTs. The end-user experience was also impressively free of data corruption: as long as data updates are done with as small of a "granularity" as possible there are very few instance of data merging in unexpected ways and users always converged to the same application state. The remaining challenges at the conclusion of this project were mostly in building a robust and decentralized networking layer for CRDT synchronization.

You can download the latest version of Trellis from the releases page.

You should see both peers in the Network panel of both clients. If you now open the same document in both clients, you'll be able to see the edits from one synchronize to the other in realtime.

You will need the Electron Forge CLI installed globally:

Windows only: You also need to have the C++ compiler toolchain installed. The easiest way to do this is to install Microsoft's windows-build-tools from an elevated prompt (run as Administrator).

Linux only: You also need to have the required GTK development headers and libraries installed:

Running and testing the app

To start the app:

To generate a packaged application: