This project implements the processor from the game http://www.zachtronics.com/tis-100/ in an FPGA. Specifically this is an effort to build it in the Xilinx Vivado tool chain with as close an adherence to the game behavior as possible.

The T21 node is the in game name for the processor that you're programming for the TIS100 system.

This project was tested with a http://zedboard.org/product/microzed. This board uses a Zynq 7Z020 to allow communication between an FPGA and a ARM processor.

For a blog post on some of the design and debug process, check out https://www.robopenguins.com/tis100-on-fpga/

My main resource was the links in https://tis100.complexity.nl/links.html. It had pretty much all the resources I'd need along with source for a bunch of emulators.

When I moved to using a block design in the project I used scripts created by marcel42 https://forums.xilinx.com/t5/Vivado-TCL-Community/Using-version-control-with-Vivado-in-project-mode/td-p/863202

Currently this codebase can generate a Vivado project that can run simulations of a grid of T21 nodes or run in realtime with a single node acting as a coprocessor to an ARM CPU. The nodes are functional and should be exactly faithful in behavior to the game implementation. The one missing feature is the that the virtual ports ANY and LAST aren't supported. While I think it's possible to implement their behavior, it would require a much more complicated design.

Here's the schematic for the code:

In addition I've written a series of python scripts to aid in development and testing. These include:

An example simulation is running the following code in a single node:

I also tested that this code could run in realtime on my Microzed board. Here you can see the serial output when the CPU sends the input into a wrapper for the TIS100 node. 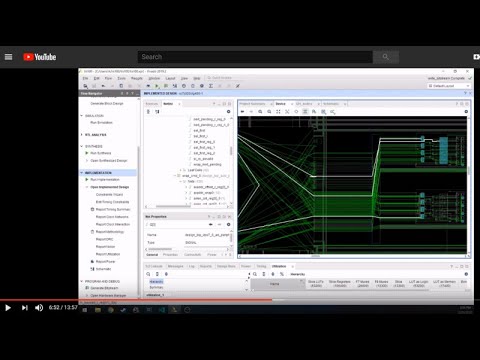 Another simulation is able to correctly solve the 6th puzzle in the game "Sequence Generator" using two nodes.

The code and input:

The first 7 outputs from the simulator:

I created my own binary representation of the TIS100 instructions. The format is (len in bits):

All jump instructions use the const field to give the absolute address to jump to.

I was doing development from windows, but I used Git Bash as the terminal since I'm more comfortable scripting in Bash than Batch Script. These scripts should work with minor modification on Linux, or you can use a similar setup on Windows. I adapted the scripts from https://forums.xilinx.com/t5/Vivado-TCL-Community/Using-version-control-with-Vivado-in-project-mode/td-p/863202 once I added the complexity of managing design block files.

Some of the scripts assume you have Python3, Vitis, and Vivado bin directories added to the PATH environment variable.

To generate the Vivado project

This creates a directory tis100/. To rerun the build script you must first delete this directory. You can then open the Vivado project and use the GUI.

To run the unit tests

This will run the Xilinx simulator from Vivado in the command line and report the results of the unit tests.

Each test tests one of the modules. Most have a corresponding python script that generates the waveform used for validation.

The compiler currently only takes TIS100 assembly files for a single node. It does basic validation and error checking.

The current output formats are:

For example to compile the multiplier code for the emulator:

This is a pretty bare bones implementation for testing purposes. Right now the instructions, node layout, and input and output streams are hard coded in the main function.

It can load the compiler output and prints the register state for each time tick.

To run on real hardware: