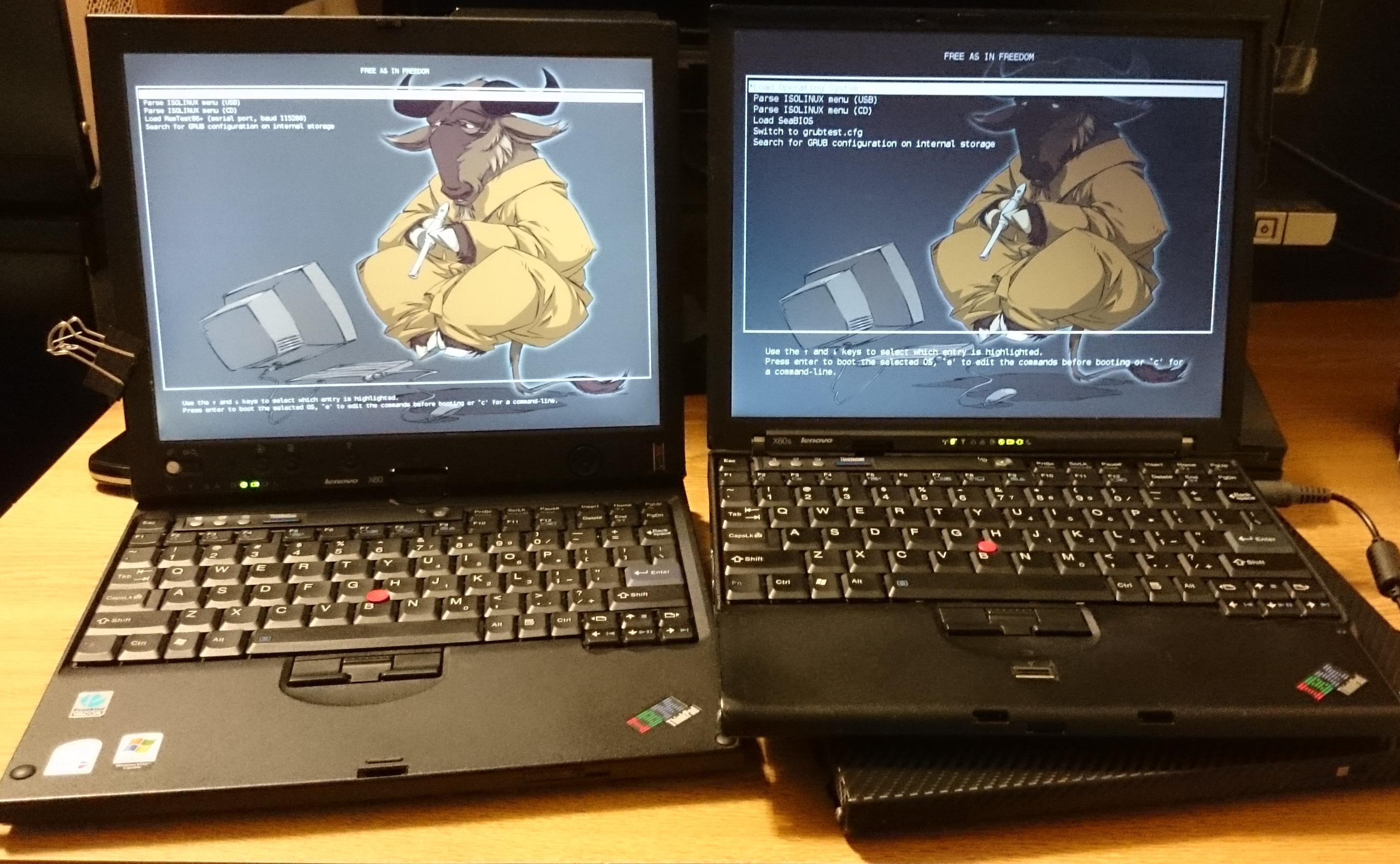 The ThinkPad X60 is the first Libreboot laptop, and the only laptop series where every motherboard is guaranteed to work with Libreboot (no ATI GPUs, all LCDs work out of the box, etc.).

Note: For best results, install a Debian-based Linux distro. The Libreboot team recommends Trisquel 6 (32-bit), but plain-old Ubuntu or Debian would work.
Note: If you are using Trisquel, you must use an ethernet cable to connect to the internet.

The flashrom and bucts programs require a few dependencies. Install them automatically with the Libreboot builddeb scripts.

Next, we actually have to build flashrom and bucts from source code. The Libreboot developers have made a nice build script that does this automatically:

Under the bin/ folder in libreboot_bin/, there are a multitude of Libreboot ROMs sorted by motherboard.

Choose the ROM with your laptop's keyboard layout (US or UK, QWERTY or DVORAK). For ThinkPads, choose a serial ROM if dock and serial port support is needed.

Once you know which ROM to use, remember it's directory path for the next step (ex. bin/x60/libreboot_serial_usqwerty.rom )

Check the ROMs section from the official Libreboot Documentation for the latest list.

Note: For a detailed explanation of how this process works, see the file Software-Flashing-Process-i945.md .

If you are flashing Libreboot for the first time, on an unmodified ThinkPad running Lenovo's BIOS, you will need to follow this special process.

Back up Official Lenovo BIOS

It is strongly recommended to back up the BIOS image from the motherboard, just in case the Lenovo BIOS needs to be restored.

This BIOS image is unique to every motherboard. It will be impossible to restore the Lenovo BIOS once it is lost. Do not use another laptop's BIOS image.

Note: Replace bin/YOURBOARD/YOURROM in the command below with the path to the ROM you selected.

Warning: If BUC.TS=1 was not enabled, do not continue, do not turn off your laptop; run the flash script again.

Warning: If the "errors" do not match, do not continue, do not turn off your laptop. Run the script again. If the output still doesn't match, something is wrong; reinstall the factory.bin image.

Note: If you boot and you see nothing, try turning up the backlight Fn+Home. For ThinkPad X60 models, if the backlight resets to zero when turning it up while at max, consult Libreboot's TFT Brightness Guide.

Note: If the laptop turns on, but doesn't boot at all; and there is absolutely no sounds or sign of life, Libreboot might have been flashed incorrectly. It is still possible to return to the Lenovo BIOS by disabling bucts 1. Disassemble the laptop and unplug the CMOS battery for at least 5 seconds. Plug the CMOS back in, reassemble the laptop, and turn it on. The Lenovo BIOS should appear, though it will require you to set the time in BIOS Setup. Boot into Linux, and start over from step 1 immediately.

Note: If the laptop emits three loud beeps when turned on, it has been fully bricked. A hardware BIOS flasher is required to restore it to working order. We recommend a $40 Bus Pirate and $20 8-pin Pomona Clip from eBay.

On a few rare X60 variants, the Trackpoint mouse might not work out of the box. Not to worry though, just use nvramtool with the Libreboot package to enable it.

Now that Libreboot has been installed and is up and running, it must be flashed a second time to fully remove the Lenovo BIOS.

Note: Replace /path/to/libreboot.rom in the command below with the path to the ROM you selected.

Note: If you're squeamish about cracking open your ThinkPad, you can just buy a Atheros WiFi USB Dongle from ThinkPenguin. Of course, that dongle will take up one of your precious USB ports...

If you are planning on using Trisquel or some other FSF-approved GNU/Linux distro, you must replace the Intel mPCI wifi card with an Atheros Wireless-N mPCI card ($10-15).

The Intel card requires proprietary blobs, makes the palmrest extremely hot, and only supports the slower Wireless-G anyway; so it's well worth the upgrade.

In the future, if you ever want to update Libreboot on the X60 (or restore the factory BIOS), follow this process.

Note: Replace /path/to/libreboot.rom in the command below with the path to the ROM you selected.

There might be a high pitched whining noise coming from the CPU at times, so if it bothers you, follow this procedure to get rid of it:

Note: On Trisquel 6, you will need to use a later powertop version from git. The one in the repositories is too old. Check the next section.

First, install powertop from the repositories:

Now you can use this command to kill that noise:

Note: This script is meant for Trisquel 6, since it's version of powertop is too old. But it works on other Ubuntu/Debian systems.

Included with the libreboot release is a script called powertop.trisquel6. Run this and it will setup powertop to run with --auto-tune at boot time. Load the file in your text editor to see how it does that.

The next time you boot the machine, the buzz will be gone.

Powertop will not work immediately, it has to collect measurement data before implementing it's features, which will be stored in /var/cache/powertop/saved_parameters.powertop Leave the laptop running on battery for a while, and Powertop will figure something out sooner or later.

Many ThinkPad X60 batteries were recalled by Lenovo in 2007, and will replace old ones with fresh new one for free, to this day.

The Lenovo BIOS is required to check if your battery is on the list, so you might want to do this before flashing coreboot. Make sure you've updated to the latest version of the Lenovo BIOS. 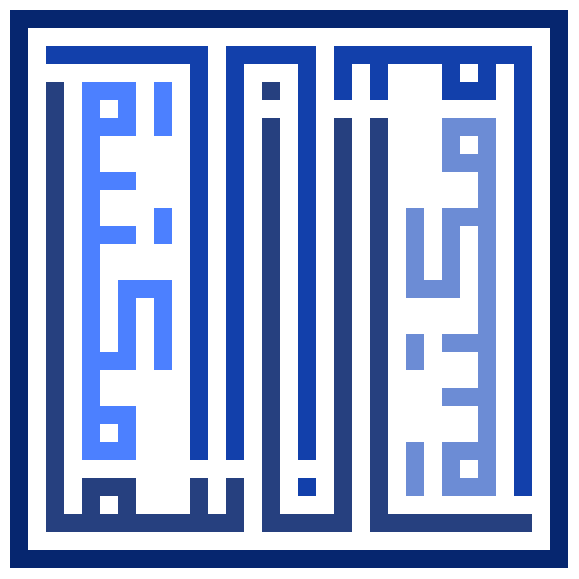 Coreboot is an open source, user configurable BIOS. However, it does use a few proprietary blobs here and there.

These require hardware flashing. Due to Intel Management Firmware, proprietary blobs are required for newer Intel motherboards to even power up.

Most Intel Chromebooks come with Coreboot preinstalled. SeaBIOS can optionally be installed to add Windows support.

Just use John Lewis's Installation Script for All Models to autoinstall.

NOTE: The Libreboot components of this wiki was divested into the Official Libreboot Documentation here. Please use that from now on.

Libreboot laptops are certified by the FSF to protect your freedom.

They contain no proprietary blobs of any kind, and have the best support for FSF certified GNU/LInux.