This GitHub repository offers all of the example Python code from the Third Edition of Foundations of Python Network Programming as revised by Brandon Rhodes for Python 3: 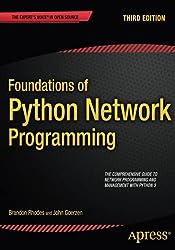 From Apress (the publisher)

Each chapter’s source code lives in its own directory:

Most of this works under Python 2

If you are still using Python 2, you will still benefit from studying these examples as they are more carefully designed than the scripts in the previous edition and also use more modern third-party libraries.

The README.md inside each chapter directory — which GitHub will display automatically when you click a chapter title in the Table of Contents above — has a paragraph near the top stating whether the scripts work with Python 2 or not. Typically each script needs only a quick run through the 3to2 tool in order to operate flawlessly under the old version of the language.

The other changes between Python 2 and 3 will be handled automatically by 3to2: print() is now a function, plain b'byte strings' now take a leading b, and many Standard Library modules were renamed during the transition.

Many novice network programmers do not have interesting networks to explore — many homes have only a laptop plus a broadband modem to which the homeowner does not have access.

To remedy this situation, I have developed an entire Network Playground consisting of more than a half dozen hosts providing services from SSH and Telnet to a web server and FTP. The “hosts” are built using Docker, and I hope soon to package the whole thing up as a virtual machine that users can download.

The result will be that the user can get a prompt from which they can connect out to the example.com server farm and talk to all kinds of network services. And just as in a real network, they will find that these machines are several hops away — hops that can be inspected by normal networking tools like traceroute:

You can find the instructions here: The Network Playground.