Peirce Quincuncial Projection of the Sphere

The R-code provided can be used to project WGS84-coordinates into Peirce quincuncial projection. Until now there was no solution to do this in R.

Jason Davies has produced a version of a quincuncial projected map that almost looks like the one in Peirce' original paper from 1879. 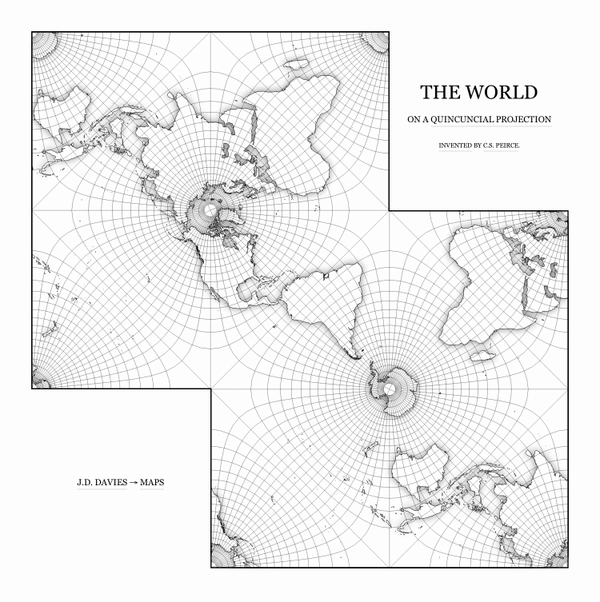 The Peirce Quincunx is one of the most beautiful map projections. It has the following properties:

The technical Part: Usage and Availability

Despite its beauty this projection is rarely known and used. Also it is not supported by the important projection libraries. Neither mapproj nor Proj.4 support it. But there are exceptions. Micheal Bostock and Jason Davies have done with d3-geo-projection very, very valueable work. It supports the quincunx, but is only for webmapping and can't be used in R to plot maps as images.

Long story short: I found an tcl-implementation by Kevin B. Kenny here and translated it to R. The function //toPeirceQuincuncial// projects a geodetic coordinate quincuncial to the plane. I tested the function once with the coordinates of the equator. The result was like expected a square.

To create a shape file i transformed Bjorn Sandviks world borders dataset to wkt. Then i transformed the wkt file to a table with the columns lat/lng/country. After that i reprojected all the coordinates using the R-code above and concatenated the reprojected points to wkt polygons. For those who don't know how to do this in R i have uploaded ready to use projected shape files. If you use these files or the R-code, please provide a link to this website.