Dave Gnukem is a retro-style 2D scrolling platform shooter similar to, and inspired by, Duke Nukem 1 (~1991). The source code is cross-platform and open source. It runs on Windows, Linux, Mac OS X and more. (The original Duke Nukem 1 had 16-color EGA 320x200 graphics; the aim here is 'similar but different' gameplay and 'look and feel'. It is kind of a parody of the original. Please note it is not a 'clone', and not a 're-make'.) 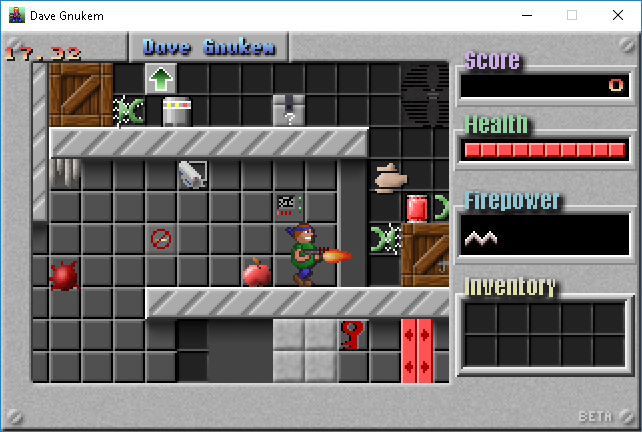 Who is to blame for this?

The project was originally created and maintained by David Joffe (~1994 to 2004, and Oct 2016 to present). It was maintained by EMH (Evil Mr Henry http://www.emhsoft.com/) from 2004 to 2008. Additional contributions by: T.O.G, Vytautas Shaltenis, Kent Mein, Steve Merrifield, Felix Richter, Kevin Joffe. See also 'Additional Credits' below.

It would be really great if someone could create packages for all major Linux distros (perhaps dual packages, i.e. one for data, one for binary? as licenses differ a bit .. or just one?)

Note the aim of Dave Gnukem is not to be a 'clone', nor to try match DN1 gameplay precisely - the goal is to be 'similar but different', sort of a parody though not terribly funny. It's not the purpose or intention of this project to produce a 'clone', nor is it the intention to try load actual original level or sprite data into this 'engine'. The included levels have been created from scratch by users. The included sprites (apart from a few small exceptions mentioned at the bottom of this README) have been drawn by hand from scratch. The game is sort of a hat tip to the original. - David Joffe

Try find the exit, while dodging or shooting monsters.

To open doors, find the correct color key, and press the action key on the 'lock' nearby the door(s).

The year is $CURRENTYEAR+8. An evil genius, Dr Proetton, has been hired by the CIA to infect the world's computers with a virus called SystemD, crippling them. Only you can stop him. You must find the floppy disk with the Devuan Antivirus on it, and install it on the master computer, which is hidden in Vault7.

Any resemblance to actual persons or entities is purely coincidental

TL;DR Shoot anything that moves

* "Evil SuperTux": Kindly note that no disrespect is intended here toward SuperTux: In this game the SuperTux's have only turned evil due to being infected by the SystemD virus. Save the world by finding the Devuan Antivirus, and they'll be cured.

Then follow the same instructions as for Linux, e.g. git clone the src, cd into src folder, git clone the gnukem_data into 'data' folder, and 'make'

Either download the source code archive, or get the latest source code with git. Make sure the 'data' subfolder is also present.

The latest source code and data archives can be downloaded here (these should generally be stable and the best option to download):

GETTING THE LATEST SOURCE AND DATA FOLDER USING GIT:

To get the latest source with git, you need two repos, the source code, and the data, which must be exactly cloned into 'data' under the main folder:

Run with ./davegnukem if it built correctly (NB, it must find the 'data' folder)

How to install dependencies on Debian, Ubuntu etc.:

(NOTE: If you don't have libsdl-mixer1.2 for whatever reason and you just want to get it compiling without sound, you can add -DNOSOUND to the CCFLAGS in the Makefile, and remove -lSDL_mixer from the Makefile LIBS setting.)

Same as Linux - type 'make'. Run with ./davegnukem if it built correctly.

Dependencies: You may have to first install LibSDL1.2 and LibSDL-Mixer1.2 (these can be installed by downloading the source code and doing 'make' and 'make install' (as root) for each of these first).

To build a Windows installer, use Inno Setup 5.

Note: As of Apr 2020 it is still recommended to use the older 'version 5' of Inno Setup (and not versions 6 or higher) as Inno Setup version 6 appears to have dropped support for Windows XP, which we still support (this also indirectly allows ReactOS support)

The basic process of building a Windows installer is as follows (this process is still a little crude/unrefined and may require a bit of hackery if you're trying to do this):

Note there is currently no 'undo', so be careful. If happy with a set of work, save your changes.

NB: All in-game cheat/debugging keys (eg level up) must first be turned on by pressing Ctrl+Shift+G

Note that for active animated objects that consist in the spriteset of multiple sprites (e.g. each conveyor belt piece has 4 sprites, for its animation), you must place the first of the four in the map for the object to work correctly.

Keep in mind that once the hero has the powerboots, he'll be able to jump higher. So there is a sort of logical progression if you place powerboots in a level, i.e. they should be placed once per 'mission' (i.e. set of levels), and levels prior to that should assume the default lower jump height, levels after that point might possibly assume the higher jump height.

To add a new 'mission' (i.e. set of levels), edit the missions.txt file and add a new line containing the name of your .gam file, e.g. "mygame/mygame.gam" (without quotes). (You should try keep all files associated with a particular game/mission in its own subfolder.) To add/remove levels for that game/mission, edit the .gam file (see the included .gam files to see the format).

The name is a pun on 'Duke Nukem' and 'Gnu' as a sort of 'hat-tip'/reference to the open source license/model.

The game took forever to complete to mimic the Duke Nukem Forever model of taking forever to be released.

The underlying 'engine' supports high frame rates and smooth scrolling etc.; the reason the frame rate is artificially capped to 18fps is that the earliest versions (~1994/1995-ish) were written for 16-bit 8086/80286, which used hardware timer interrupts that ran at around 18Hz. (Though it's possible to uncap the frame-rate, the CThing's are unfortunately currently hardcoded for 18Hz, so they just run silly-fast if one uncaps the frame rate ... if writing a new game or a 'version 2' it should be easy to use a higher frame rate and write new CThing's movement code to be based on time-passed-since-last-frame or some-such. Likewise the blocky viewport scrolling itself should be easy to replace with smooth viewport-scrolling.)

The source code itself (and most of the data/sprites) for Dave Gnukem are dual-licensed under MIT license or GPL.

Apart from the abovementioned, all other data included with 'version 1' is dual-licensed under MIT license or GPL.