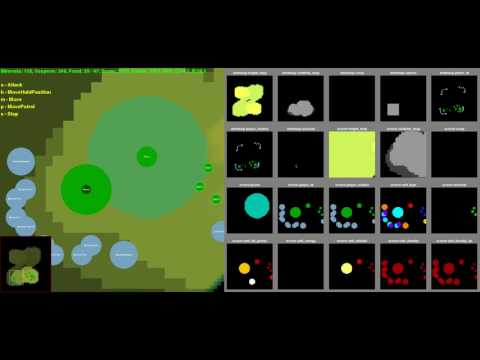 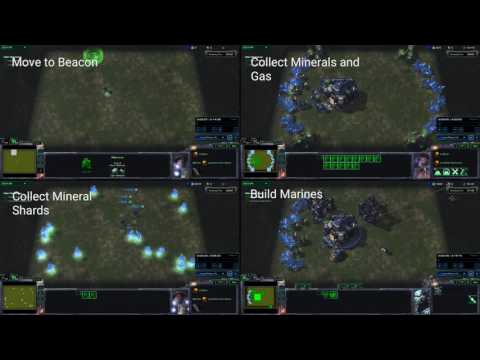 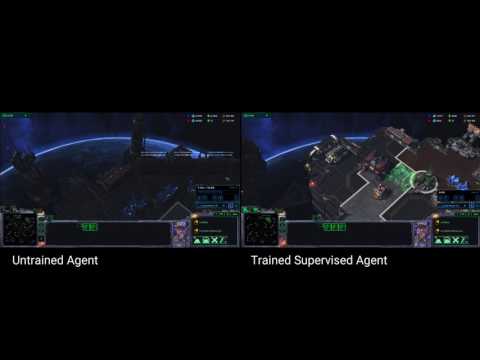 PySC2 is DeepMind's Python component of the StarCraft II Learning Environment (SC2LE). It exposes Blizzard Entertainment's StarCraft II Machine Learning API as a Python RL Environment. This is a collaboration between DeepMind and Blizzard to develop StarCraft II into a rich environment for RL research. PySC2 provides an interface for RL agents to interact with StarCraft 2, getting observations and sending actions.

We have published an accompanying blogpost and paper, which outlines our motivation for using StarCraft II for DeepRL research, and some initial research results using the environment.

Disclaimer: This is not an official Google product.

You can reach us at pysc2@deepmind.com.

The easiest way to get PySC2 is to use pip:

That will install the pysc2 package along with all the required dependencies. virtualenv can help manage your dependencies. You may also need to upgrade pip: pip install --upgrade pip for the pysc2 install to work. If you're running on an older system you may need to install libsdl libraries for the pygame dependency.

Pip will install a few of the binaries to your bin directory. pysc2_play can be used as a shortcut to python -m pysc2.bin.play.

or from a local clone of the git repo:

PySC2 depends on the full StarCraft II game and only works with versions that include the API, which is 3.16.1 and above.

Follow Blizzard's documentation to get the linux version. By default, PySC2 expects the game to live in ~/StarCraftII/. You can override this path by setting the SC2PATH environment variable or creating your own run_config.

Install of the game as normal from Battle.net. Even the Starter Edition will work. If you used the default install location PySC2 should find the latest binary. If you changed the install location, you might need to set the SC2PATH environment variable with the correct location.

PySC2 should work on MacOS and Windows systems running Python 2.7+ or 3.4+, but has only been thoroughly tested on Linux. We welcome suggestions and patches for better compatibility with other systems.

PySC2 has many maps pre-configured, but they need to be downloaded into the SC2 Maps directory before they can be played.

Download the ladder maps and the mini games and extract them to your StarcraftII/Maps/ directory.

You can run an agent to test the environment. The UI shows you the actions of the agent and is helpful for debugging and visualization purposes.

It runs a random agent by default, but you can specify others if you'd like, including your own.

You can also run two agents against each other.

To specify the agent's race, the opponent's difficulty, and more, you can pass additional flags. Run with --help to see what you can change.

Play the game as a human

There is a human agent interface which is mainly used for debugging, but it can also be used to play the game. The UI is fairly simple and incomplete, but it's enough to understand the basics of the game. Also, it runs on Linux.

In the UI, hit ? for a list of the hotkeys. The most basic ones are: F4 to quit, F5 to restart, F9 to save a replay, and Pgup/Pgdn to control the speed of the game. Otherwise use the mouse for selection and keyboard for commands listed on the left.

The left side is a basic rendering. The right side is the feature layers that the agent receives, with some coloring to make it more useful to us. You can enable or disable RGB or feature layer rendering and their resolutions with command-line flags.

Running an agent and playing as a human save a replay by default. You can watch that replay by running:

This works for any replay as long as the map can be found by the game.

The same controls work as for playing the game, so F4 to exit, pgup/pgdn to control the speed, etc.

You can save a video of the replay with the --video flag.

Maps need to be configured before they're known to the environment. You can see the list of known maps by running:

If you want to submit a pull request, please make sure the tests pass on both python 2 and 3.

The mini-game map files referenced in the paper are stored under pysc2/maps/ but must be installed in $SC2PATH/Maps. Make sure to follow the download instructions above.

Maps are configured in the Python files in pysc2/maps/. The configs can set player and time limits, whether to use the game outcome or curriculum score, and a handful of other things. For more information about the maps, and how to configure your own, read the maps documentation.

A replay lets you review what happened during a game. You can see the actions and observations that each player made as they played.

Blizzard is releasing a large number of anonymized 1v1 replays played on the ladder. You can find instructions for how to get the replay files on their site. You can also review your own replays.

Replays can be played back to get the observations and actions made during that game. The observations are rendered at the resolution you request, so may differ from what the human actually saw. Similarly the actions specify a point, which could reflect a different pixel on the human's screen, so may not have an exact match in our observations, though they should be fairly similar.

You can visualize the replays with the full game, or with pysc2.bin.play. Alternatively you can run pysc2.bin.replay_actions to process many replays in parallel.

v3.0: Radar is only defined if you use raw or feature units. Latest
+ 6 releases