Train embodied agents that can answer questions in environments

Code for the paper

In Embodied Question Answering (EmbodiedQA), an agent is spawned at a random location in a 3D environment and asked a question (for e.g. "What color is the car?"). In order to answer, the agent must first intelligently navigate to explore the environment, gather necessary visual information through first-person vision, and then answer the question ("orange"). 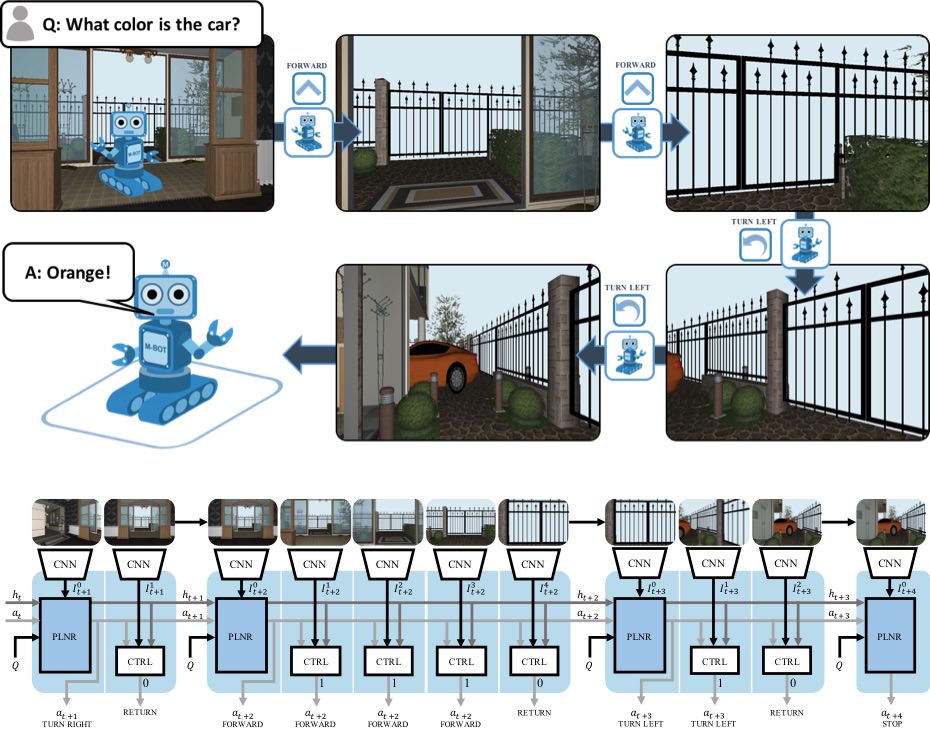 If you find this code useful, consider citing our work:

NOTE: This code uses a fork of House3D with a few changes to support arbitrary map discretization resolutions.

Questions for EmbodiedQA are generated programmatically, in a manner similar to CLEVR (Johnson et al., 2017).

Generating questions for all templates in EQA v1, v1-extended

We trained a shallow encoder-decoder CNN from scratch in the House3D environment, for RGB reconstruction, semantic segmentation and depth estimation. Once trained, we throw away the decoders, and use the encoder as a frozen feature extractor for navigation and question answering. The CNN is available for download here:

The training code expects the checkpoint to be present in training/models/.

If this is the first time you are using SUNCG, you will have to clone and use the SUNCG toolbox to generate obj + mtl files for the houses in EQA.

Preprocess the dataset for training

This model computes question-conditioned attention over last 5 frames from oracle navigation (shortest paths), and predicts answer. Assuming shortest paths are optimal for answering the question -- which is predominantly true for most questions in EQA v1 (location, color, place preposition) with the exception of a few location questions that might need more visual context than walking right up till the object -- this can be thought of as an upper bound on expected accuracy, and performance will get worse when navigation trajectories are sampled from trained policies.

Note that keeping the cache flag ON caches images as they are rendered in the first training epoch, so that subsequent epochs are very fast. This is memory-intensive though, and consumes ~100-120G RAM.

Download potential maps for evaluating navigation and training with REINFORCE.

This code release contains the following changes over the CVPR version

Train embodied agents that can answer questions in environments