This repository contains both links to download the data, and the official evaluation script to evaluate models. 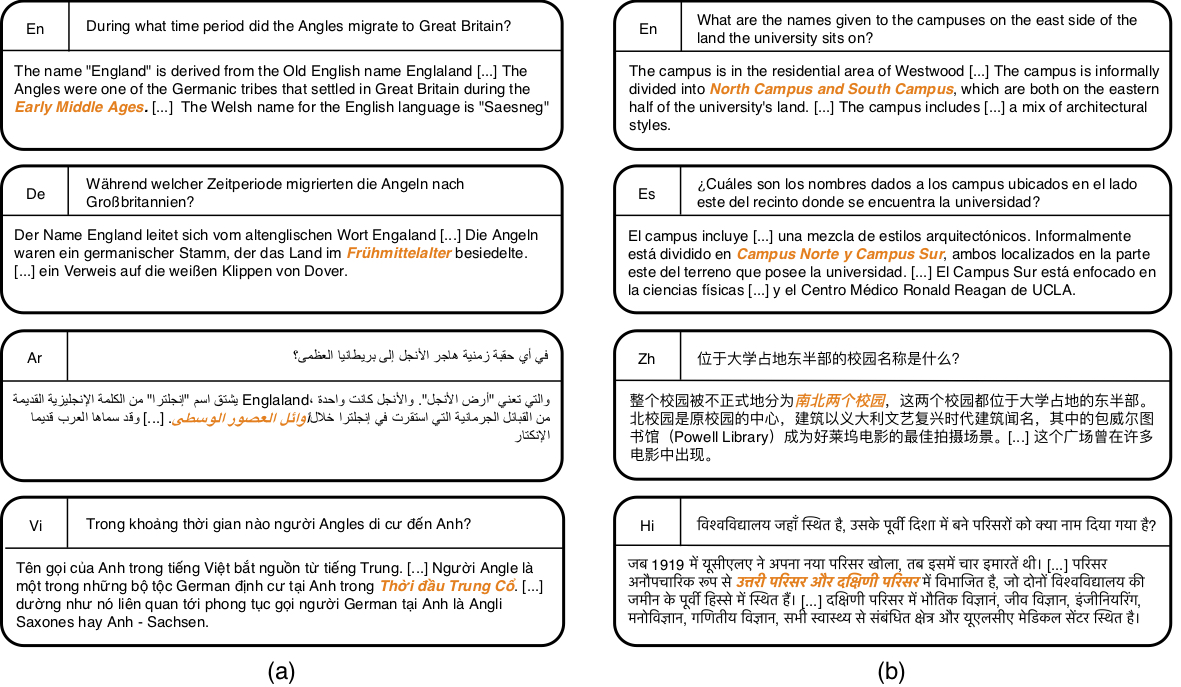 
For more details on how the dataset was created, and baseline models testing cross-lingual transfer from English, please refer to our paper, MLQA: Evaluating Cross-lingual Extractive Question Answering

The data can be downloaded from here: MLQA_V1.zip

MLQA is split into development and test splits. The files are formatted using the popular SQuAD format. The files are named with the following convention:

e.g. the file dev-context-ar-question-es.json contains the development split, with questions in Spanish, and context documents (and answers) in Arabic.

The following table shows how much data is in each language:

The official evaluation script is mlqa_evaluation_v1.py. See the paper for a description of our evaluation procedure.

The script is run in an analogous way to the SQuAD evaluation script, but requires the answer language as an additional command line parameter. E.g. to evaluate Hindi predictions, run the following:

MLQA is intended to be an evaluation corpus. Please limit evaluations on the test set to an absolute minimum to prevent overfitting. There is a development dataset split which can be used for running intermediate evaluations during model development.

If you are running experiments on MLQA, it is important that you clearly state your experimental settings. If you are performing zero-shot experiments, you should only use the development data in the language you are training on. Using MLQA dev data for particular target language to tune performance in that target language is a valid research direction, but is not strictly zero-shot and you should make sure that you explicitly state how you use the development data to ensure fair comparison in the future.

As mentioned in the paper, some instances that cannot be answered are generated by our annotation procedure. We will release these as a separate resource shortly here.

Please cite [1] if you found the resources in this repository useful.

The dataset, which is derived from paragraphs in Wikipedia, is licensed under CC-BY-SA 3.0. The code in this repository is licenced according the LICENSE file.